Ricardo Campello had a great start into the 2014 season with a podium finish at the Gran Canaria Wind and Waves Festival, but then at the second event on Tenerife he finished on a 17th place. Ricardo was disappointed but stayed focused scored a 2nd at the Indoor Jump event and a 5th at the PWA Wave event in Denmark. We have hooked up with Ricardo, right before the next Wave event on Sylt, to speak about his season and the current situation in Venezuela, which makes traveling not easy. 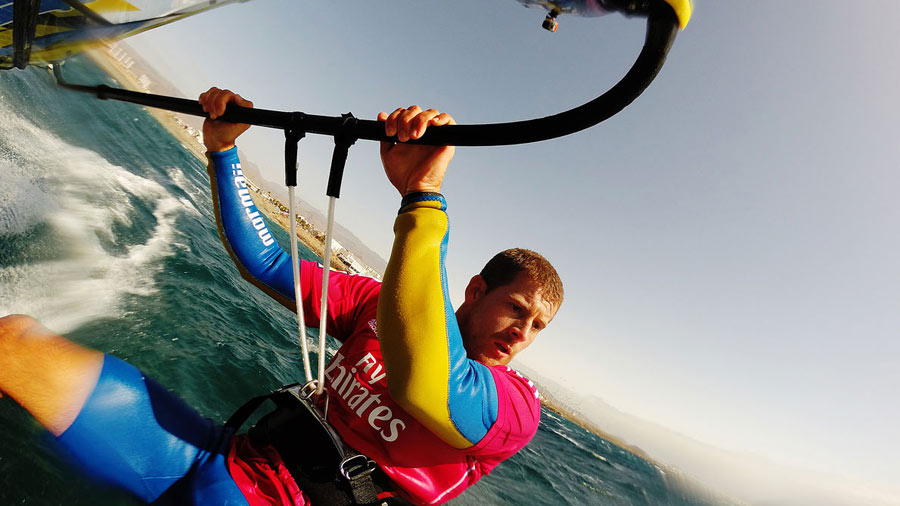 Continentseven: How are your doing? 100% fit after your foot injury on Gran Canaria?
Ricardo Campello: Yes, my foot is all good now, actually it opened a little bit, but now its all good!

Continentseven: You started great into the 2014 season with a 2nd place on Gran Canaria! On Tenerife you finished in 17th, then a 2nd at the indoor event and a 5th at Klitmoller. Winning and losing is close these days. What did you get out of this or did it teach you anything?
Ricardo Campello: Well I had a great start then a really bad result in Tenerife I was just upset with how they did our heat on the single elimination, there was basically no wind and I had a really hard time to get planing. I was on my biggest equipment and struggling, then in the double elimination I was very unlucky as I couldn’t get ramps! But that is how it goes and I hope I can discard that bad result. Now in Denmark I didn’t have a really good result either, I lost to Victor in the quarter finals. I actually sailed really good and the conditions were super hard and it was a really close heat again. Sometimes I just don’t understand what the judges want, on one of my waves they really gave me a low score, anyway now it’s time to focus on the next event !

Continentseven: How difficult were the conditions at the PWA Cold Hawaii event in Denmark?
Ricardo Campello: Really really difficult, the wind was straight onshore and I actually did my jumps and wave rides on the same tack, the wind was super light and a lot of current. I’m super happy with my new boards and sails for those conditions!! 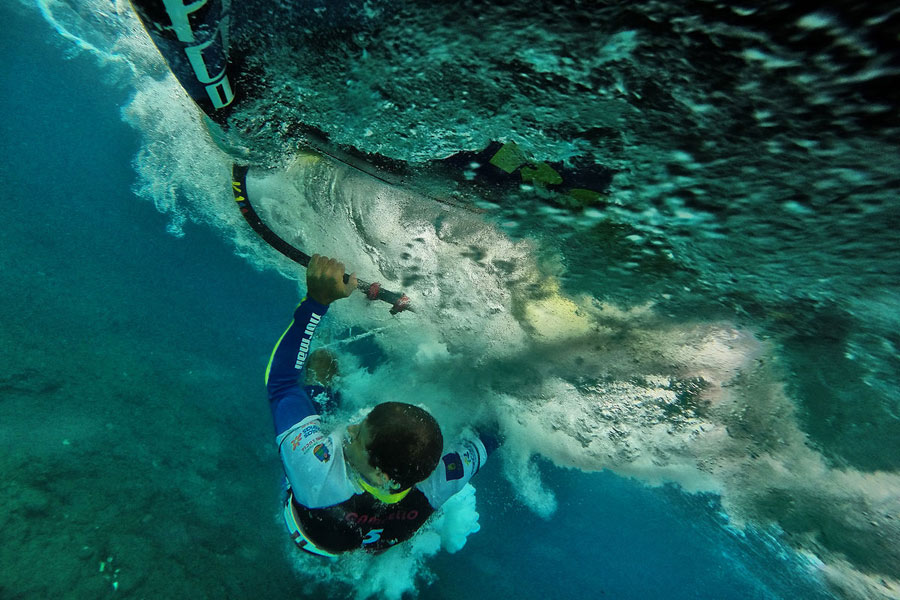 Continentseven: Are you ready to win a wave event at the moment? Perhaps on Sylt?
Ricardo Campello: To be honest I think all the top guys are ready to win and event, its just a matter of doing it. I have been fighting for it for years and I really hope I can do it. I will do my best to win the next events but the other guys are really strong!

Continentseven: What’s your goal for the overall ranking, after already finishing twice in 2nd.
Ricardo Campello: My goal is to become Wave World Champion soon !

Continentseven: Are you used to your new gear, Patrik Boards and Point-7 sails or do you need bit more time?
Ricardo Campello: I’m used to it since Pozo, they are working amazing and I’m super happy with it!

Continentseven: Let’s change the topic. Venezuela, your actual home country is in the crisis and it’s not easy to book a flight and travel to Europe. For Europeans it is hard to imagine, that it can be impossible to book a flight or travel to a country nowadays. Can you try to explain the situation in a few sentences.
Ricardo Campello: Well it’s a really long and complicated thing to explain. Basically we have an exchange rate control. Now, the country is in crisis and if you want to get dollars you either buy it on the black market (which is almos 5 times more expensive) or get it from the government which is almost impossible because, they say they have no US dollars. So, basically the airlines have to sell the tickets in the local currency, but the governememt has to pay them in dollars on the official rate, but they don’t, they owe the airlines and other big companies millions and millions of dollars, so now the airlines are leaving the country and the ones that are still there sell their tickets in US Dollars or Euros at a super expensive price, plus there is nothing on the super markets. It’s a total mess! I hope soon this will all be fixed and all the Europeans can come back to El Yaque and windsurf like it used to be! 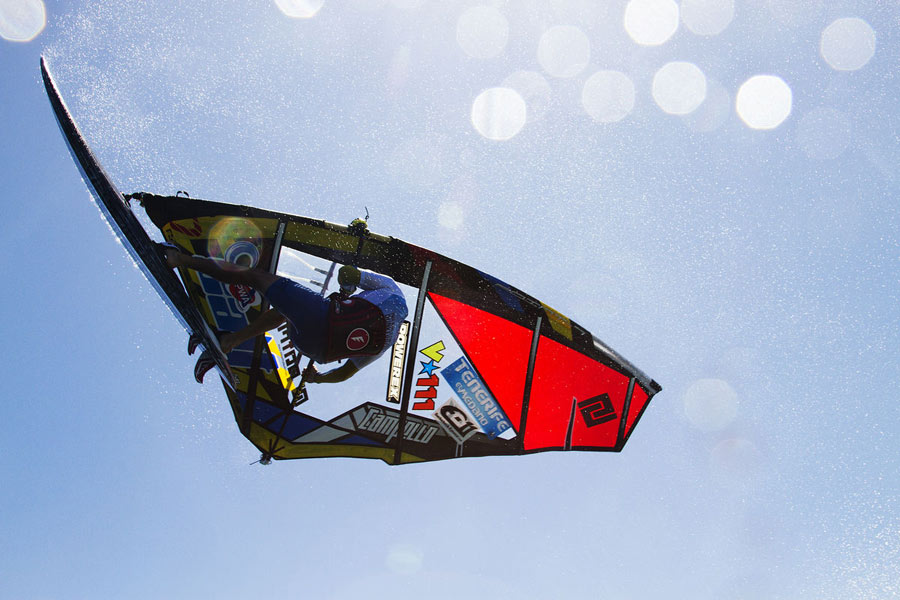 Continentseven: How much money do you need to fly to Europe?
Ricardo Campello: A lot!

Continentseven: Do you see a chance of change for the future? I mean, you need to travel or how will you organize yourself or do you think about to live in Brazil or Maui?
Ricardo Campello: I can always find a way to travel so for now it’s all good and I don’t plan to move, I love El Yaque and for me it’s amazing being there !

Continentseven: Let’s come back to the sport. Sylt is your next event. You will compete in Waves and Freestyle and in the night session. Looking forward to it and do you already have a freestyle board?
Ricardo Campello: I will try to to both disciplines, I didn’t bring my freestyle board but I will try to get one from one of my team mates! ahhaha I have too much boards to carry already! 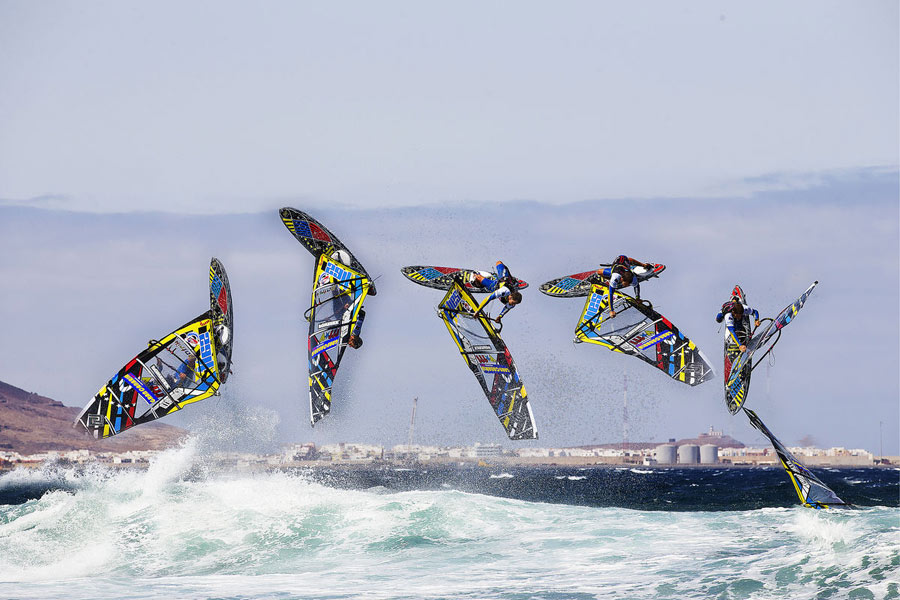 Continentseven: Will you stay in Europe after Sylt or travel back home in between Germany and the PWA event in La Torche, France?
Ricardo Campello: I will be going to Miami for a few days before La Torche!

Continentseven: We wish you good luck for Sylt and we will try to capture crazy action from you at the Brandenburger Strand!
Ricardo Campello: Thanks a lot, see you there!

Ricardo is only giving background information, this is what happens to all the people who are competing in wave: We do not really know what the judges want to see, or is it that the judges have no clear idea how to judge?
How the crowds should understand the results? How the sport can be interesting for the people if you never know why someone wins?

Everything done by or judged by man is subjective. And this what makes things interesting and worth to be curious about. Ricardo rips huge and I wish him all the best. Showing emotions, even negative is not such a bad thing after all- we are still humans, aren’t we? ( not yet mobile electronic devices). IMHO wavesailing gets harder and harder to judge because the level has got so high and the number of guys pulling of crazy moves is getting bigger and bigger. If you watch an onshore PWA wave event 10-15 years ago and now, you will know… Read more »

Ricardo is one of the nicest persons I’ve ever seen and has the right to express his opinion about anything.

Thumbs up and don’t waste any more of your time reading bullshit someone posts behind a keyboard.

Only thing to blame you is that you support Real Madrid. FORÇA BARÇA !!!

Ricardo is a super radikal rider …. all the rest doesn’t matter !

let’s go….Finn it was Medea ( web site administrator)
he had this idea to warm up the site traffic ! 😉 😉

maybe you should think about a user friendly forum with one topic per week to discuss !
many peolpe would like to partecipate more into windsurf community

Oh guys – take the chill pill, there are just few events on the world tour and if they do eliminations with almost no wind (I guess because of time and money constraints) I would be super annoyed as well..and judging style does not necessarily have to coincide with objective reality, so calm down and drink a beer