Interview with Gabriel Browne – Only 18 and already top in racing

Brazilian Gabriel Browne, who is only 18 years old, could win the Fortaleza Formula Grand Prix at his homespot. We asked Gabriel about the competition and how it feels to win in front of all the big names in the Formula windsurfing scene. 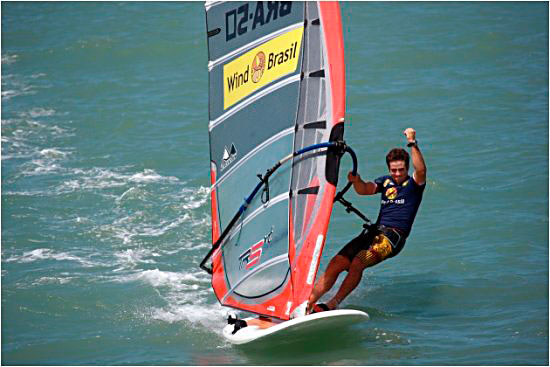 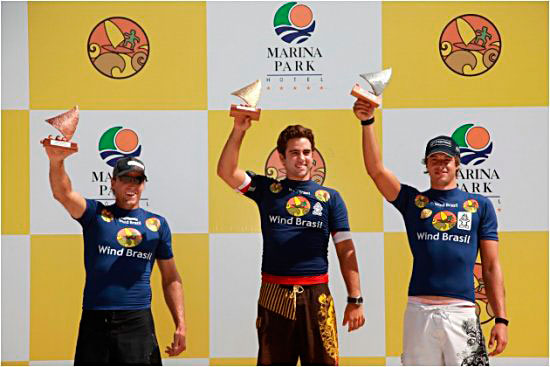 Gabriel on the top of the podium in the end (Pic: formulawindsurfing.org)

C7: In the moment your are unbeatable! You could win the Camocim Slalom Nationals and now the Fortaleza Formula Grand Prix! How does it feel?

Gabriel: I still don´t believe the last weeks. First I could win the Slalom Nationals and now the Fortaleza Formula Grand Prix. I’m very happy for my last results. Racing with the top guys here in my city of Fortaleza was an amazing feeling.

C7: Was it your biggest success in your career to win at your homespot?

Gabriel: I think so. This is my best result in an event like this. Almost all the top Formula sailors were here. Winning at my homespot was even better. I had all my friends and family here.

C7: How were the conditions and the racecourses? Were you in favour of them both?

Fortaleza is known for the strong winds. This year it has not been different. The wind was about an average of 18 knots during the event. On the first days we had a big swell. So the waves were big and the wind was not shifting so much those days. While the last days it changed a bit. More flat, gusty and shifty. So I think we had a lot of different conditions in this event.

C7: Which equipment did you use in most of the races?

C7: Did you expect to win? I mean, you could beat worldchampions like Steve Allen or Wojtek Brozozowski, the biggest names in the Formula windsurfing discipline!

Gabriel: Before the event I was not expecting to win. Steve did not loose any of the FW events this year and Wojtek is an excellent competitor and very fast in strong winds. I also would like to mention the other sailors like Alberto Menegatti, Dennis Little, Jesper Vesterstrom, Wilhelm Schurmann, Paulo dos Reis, Melo’s… So we had a lot of very good competitiors here. But since the first race I knew that  I could fight for top places this time. I was doing my best on each race…

C7: You are only 18 years old. What can your opponents expect from you in the near future?

Gabriel:To be honest, I don’t know …One thing I’m sure is that I will do my best on each event and each race I’ll go.

C7: Would you say, you are the better Slalom sailor or the better Formula racer right now?

Gabriel: Right now I can say I’m a better Formula than  Slalom racer.

C7: Do you think your victory  can motivate other young people to start a racing career? In general the racers are older guys (30+)!

Gabriel: That’s what I hope. We don’t see many young people racing. They go more into the freestyle discipline or into waves I think. But I hope to see more people in my age racing in the near future.

C7: Will you focus in 2010 more on Formula or will you try to beat the worldchampions, Albeau, Dunkerbeck and co, in Slalom as well?

Gabriel: For 2010 I will focus a little bit more on Formula. Next year we’ll have some nice FW events with big prize money. The FW class is getting better and people are very organized there.

chris2010-01-08T02:11:10+01:00December 5th, 2009|
Subscribe
0 Comments
Inline Feedbacks
View all comments
This website is using Google Analytics. Please click here if you want to opt-out. Click here to opt-out.
0
0
Would love your thoughts, please comment.x
()
x
| Reply
We use cookies to ensure that we give you the best experience on our website. If you continue to use this site we will assume that you are happy with it.OkNoRead more