63 starters from 10 European countries found their way to the IFCA Slalom Youth & Master European Championships 2009 at Schönberger Strand, Kiel, Germany which started today. The first event day was already full of action. Both fleets, youth (under 20) with 38 starters and master (over 35) with 25 starters completed one full slalom elimination. The current Slalom World Champion Bernd Flessner dominated the masters fleet whereas William Alihiagalelei from France won in the youth category. 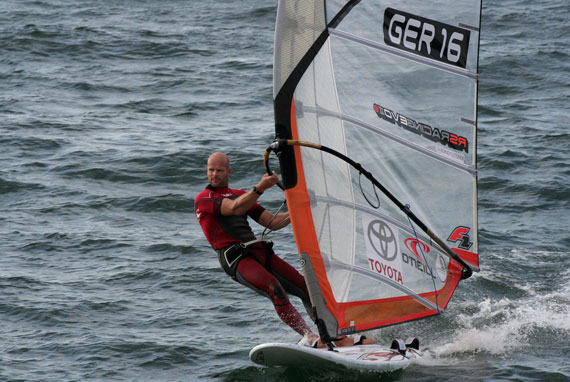 The first event day started very relaxed. During the afternoon the wind started to pick up to 15 to 24 knots – perfect for starting the first slalom elimination of the regatta. In the category master Bernd Flessner (GER-16, F2, Neil Pryde) from Germany dominated all heats and the semi final. He also finished first in the final and relegated Philipp Müller (GER-100, Gaastra) from Germany to the second place. Thade Behrends (GER-94, Exocet) from Germany finished third in front of Pawel Dittrich (GER-381, Techno, Gaastra) also from Germany. Christophe Waerzeggers (BEL-29, Maui Sails) from Belgium scored the fifth place. 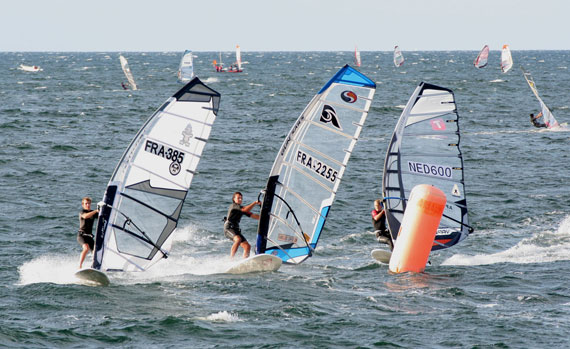 The wind forecast for the second event day looks very promising. Four to five beaufort are predicted so that the visitors can watch exciting races. In addition to the windsurf competitions, a huge supporting programme entertains all visitors. One highlight is the Testival of the Surf-Expo with some manufactures from the windsurf industry. Furthermore several funsport activities such as Speedminton invite everyone to have fun. Refreshments will also be served. Different live bands and DJs will provide entertainment and create a nice atmosphere.