10 European countries are represented at the IFCA European Slalom Championships taking place in Texel from the 14th till the 19th of June 2010. Plus three sailors from outside Europe joined the event:  young Ethan Aldert Westera from Aruba, Jesper Orth from Australia, who is originally from Denmark and stays in Europe while the summer and top pro Arnon Dagan from Israel.

Day one saw the completion of one full slalom for all fleets and heats 1-8 sailed for the men in the second slalom round. Julien Quentel (FRA-421) could wind the first round in front of Wojtek Brozozowski (Pol-11) and Nicolas Warembourg. And it´s not a surprise that Julien is leading. He dominates the French slalom circuit and mad it in the second final of the PWA event at the Costa Brava. Wojtek had his real Slalom comeback this season and finished 18th in South Korea and 12 th at the Costa Brava. But there are several other big names like Arnon Dagan, Peter Volwater, Bora Kozanoglu, Ben van der Steen, pierre Mortefon and many more, who will fight hard for the European Slalom title and the 10.000 € pricemoney.

Races were also held in two other categories, in the Youth Class and Ladies Class. 3 ladies only started and Marianne Kaplas from Finland took the lead after race 1. Alikiagalelei William has the lead in the youth class in front of Remy Benjamin. Both are from France! So looks like the French sailors are very strong in the moment.

Here is the result of the open class after day 1: 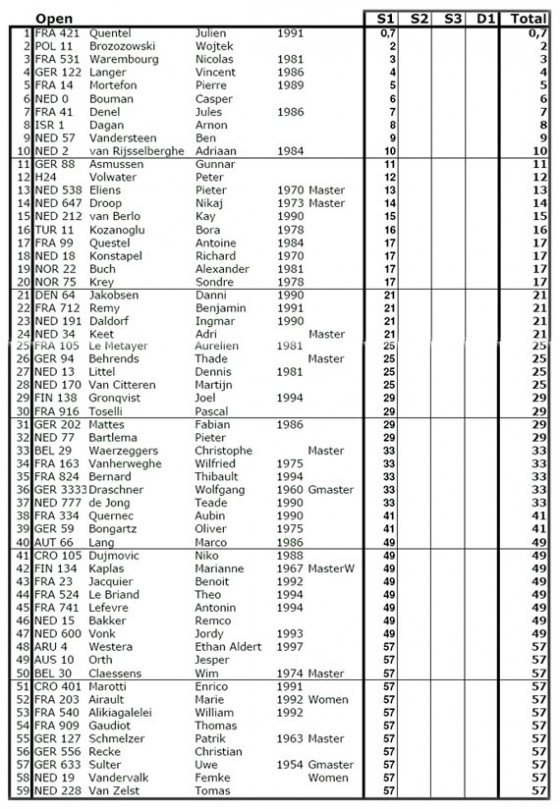 The result after day 1 at Texel (Source: Ifca).

chris2010-06-17T16:09:55+02:00June 16th, 2010|
Subscribe
0 Comments
Inline Feedbacks
View all comments
This website is using Google Analytics. Please click here if you want to opt-out. Click here to opt-out.
0
0
Would love your thoughts, please comment.x
()
x
| Reply
We use cookies to ensure that we give you the best experience on our website. If you continue to use this site we will assume that you are happy with it.OkNoRead more