Iballa Ruano Moreno (E-63) and Philip Köster (G-44) are the 2015 PWA Wave World title winners. Iballa won one event and made it twice in second place. In the men’s category it was a tight battle until the end, but Philip took the title in the end. 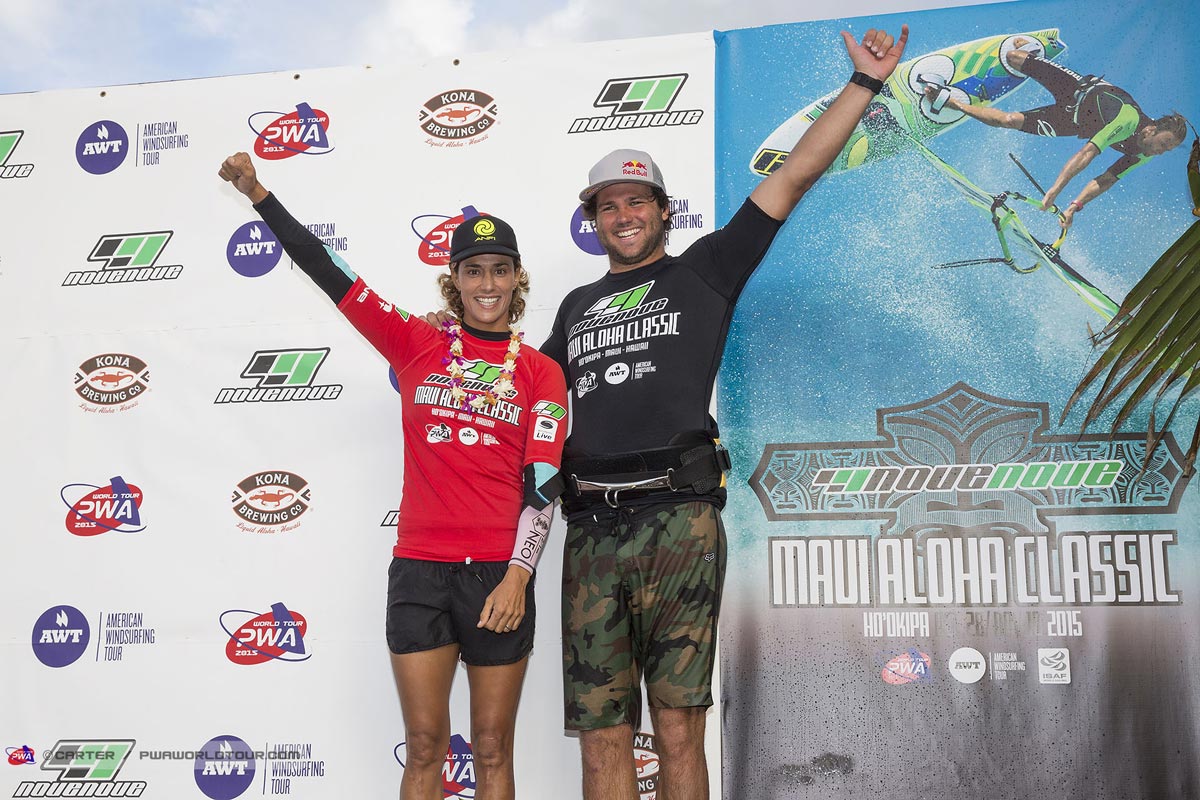 WOMEN
Iballa Ruana Moreno takes a clear victory with three podium results. The battle for the second spot in the ladies ranking was quite close one. Daida Ruano Moreno finished the NoveNove Aloha Classic  in 11th and Sarah-Quita Offringa in 7th. In the end Daida managed to stay 17 points ahead of Sarah-Quita. With a 6th place Sarah-Quita would have pushed Daida down from 2nd to third place. Before the Aloha Classic, Dutch Amanda Beenen would have had a chance to make into the top three, but although she spent the last winter on Maui to improve her starboard skills, she did not find her Maui rhythm. Canadian Ingrid Larouche is new in the top 5 rankings in 2015.

MEN
In the men’ s category it was a close fight until the end, but to win the overall title, Victor Fernandez had to make the almost impossible possible by winning the 2015 Aloha Classic. With a not ideal start in the single elimination he had to win 12 heats in a row. The former World Champ showed a great performance and advanced through 6 heats, but lost against local Levi Siver. In the end he was the second best Euro rider at Ho’okipa with a 6th place overall. 2014 PWA Wave Champ Thomas Traversa was able to improve his overall ranking, from 6th to 4th, with a 4th place at the Aloha Classic.

Philip Köster and Victor Fernandez have exactly the same points after 4 events, but Philip takes victory due to the better single event results. Alex Mussolini and Ricardo Campello have the same points, but Ricardo finished in 5th and Alex in 6th. The biggest jump in the rankings made Camille Juban, who made it from 20th to 11th place overall. Camille as well won the AWT tour again in 2015.

Jonny is your opinion. Víctor didnt win the Aloha 2015. Two second place on events and Philip had best events score result. Every competitor want to compete. I think every year the champion is deserved .
Cheers.

The discard rule helps to keep people on the PWA tour. Due to financial situations not everyone can afford to go to Maui. One could disable the discard rule for the top 5 riders as a consequence.

Congrats to Philip, but Victor should be champion 2015. Victor was the best of the season and the discard rule with only 4 events is ridiculous.

Tweets by @Continentseven
This website is using Google Analytics. Please click here if you want to opt-out. Click here to opt-out.
3
0
Would love your thoughts, please comment.x
()
x
| Reply
We use cookies to ensure that we give you the best experience on our website. If you continue to use this site we will assume that you are happy with it.OkNoRead more