Iballa Moreno & Morgan Noireaux win the 2014 PWA Starboard Severne Aloha Classic. On November 5th the double elimination got completed in difficult conditions. Easterly winds and westerly swell caused a lot of crashes and big wind chop on the waves. The battle in between Thomas Traversa and Victor Fernandez saw a happy end for the Frenchman, who got second in the event and won the 2014 PWA wave world title. Local Morgan Noireaux, he recovered well from an injury in 2013, won the event with exceptional great wave riding and smart tactics. In the ladies category Iballa Moreno won the final against 17 year-old Fiona Wylde. Iballa won the event and the PWA Wave world title at the age of 36, what’s probably one of her personal career highlights. 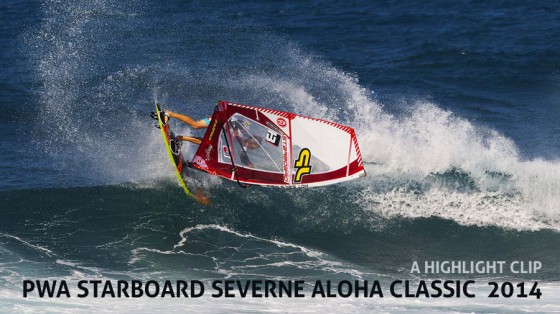 What was the mission on the final day of competition?

Duncan Coombs, head judge of the 2014 PWA Starboard Severne Aloha Classic, had to run 3 -4 heats in the ladies and men category to complete the double elimination. Iballa Ruano Moreno had the chance to win the Aloha Classic event. She already won the overall title earlier the week. In the men’s title race there were just two names left to win the 2014 PWA Wave World title: Thomas Traversa and Victor Fernandez.

Duncan went for 25 minutes long heats with the best two waves counting and a transition time of two minutes in between the heats. He started with a ladies heat and continued with a mens heat. The first final was the ladies final and the second heat the mens final.

Tough conditions during the final heats

The wind blew from eastern direction and made the westerly swell choppy and a bit unpredictable on the final day. On the inside the wind was quite fluky, the waves closed out and gave the riders a hard time to cross the waves. Even when they crashed during a wave ride they completely got washed in thick white water barrels. Iballa Moreno was swimming all the way down to the channel in front of the rocks and just made it back on her gear. Robby Naish mentioned while commentating the live stream: “It’s better to focus on bottom to top riding today.” But most of the remaining 8 riders tried to show more than that and crashed hard during Frontside Wave 360 attempts, Goiters or Aerials. The lip of the waves suddenly changed their shape and an aggressive wave on top caused wild crashes.

The conditions were the toughest during the whole competition period. It was important to pick the right wave of a set and to ride the wave smart avoiding a bit of too much risk. 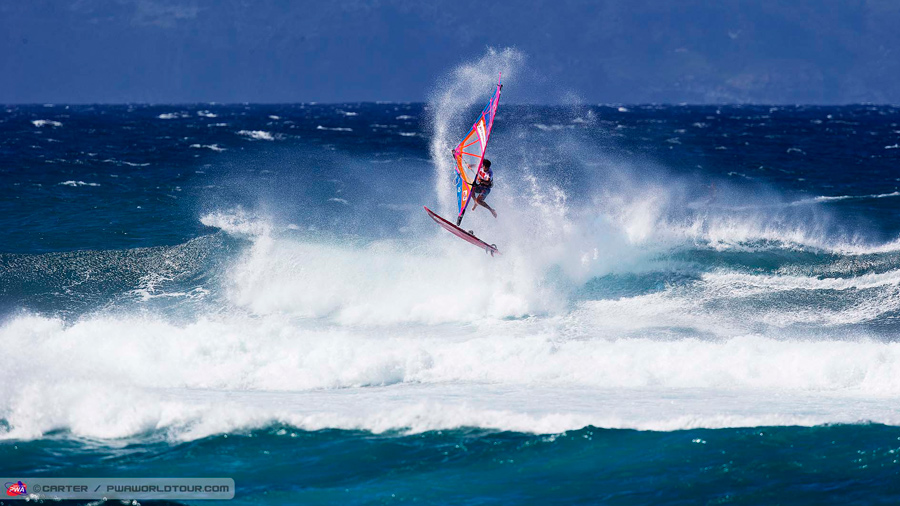 The ladies sailed three heats on the final day. Tiffany Ward defeated Junko Nagoshi and secured a podium place. Tiffany took a lot of risk and went for the biggest sets. In the following heat 17 year-old Fiona Wylde sailed with style and qualified for the winners final. Fiona had a really high score of 7.57 for her best ride. Combined with a 6.7 she had a total score of 14.27 and defeated Tiffany by 6.15 points. Fiona had the better wave selection and she easily made it into the final against the winner of the single elimination, Iballa Moreno.

The final was tough. Big sets came in and gave the two finalist a hard time in the westerly swell mixed with easterly winds. Iballa and Fiona were ripping and swimming. Both had good waves and it was an open battle during the first half of the heat. In the second half of the heat it was Iballa who selected the better waves. She sticked to her style and scored big points on the second last wave (7.45 points). With her last wave, her 8th wave in that heat – she nailed a little aerial – and earned 7.07 points. The Pozo local definitely showed great skills, took a lot of risk during the final – she even broke a mast extension in the heavy white water – and won by 2.64 points difference. Almost 20 years of experience and a perfect caddy service of twin sister Daida paid off in the end. Fiona was definitely a very hard opponent. She sails with a lot of natural style and looks so much in control when she is on a wave and seems to feel home at Ho’okipa. Imagine, how she will windsurf in a few years from now on. This time it was 36 years-old Iballa, who won with a total score of 14.52 points against young Fiona, who had 11.88 points on the sheets. 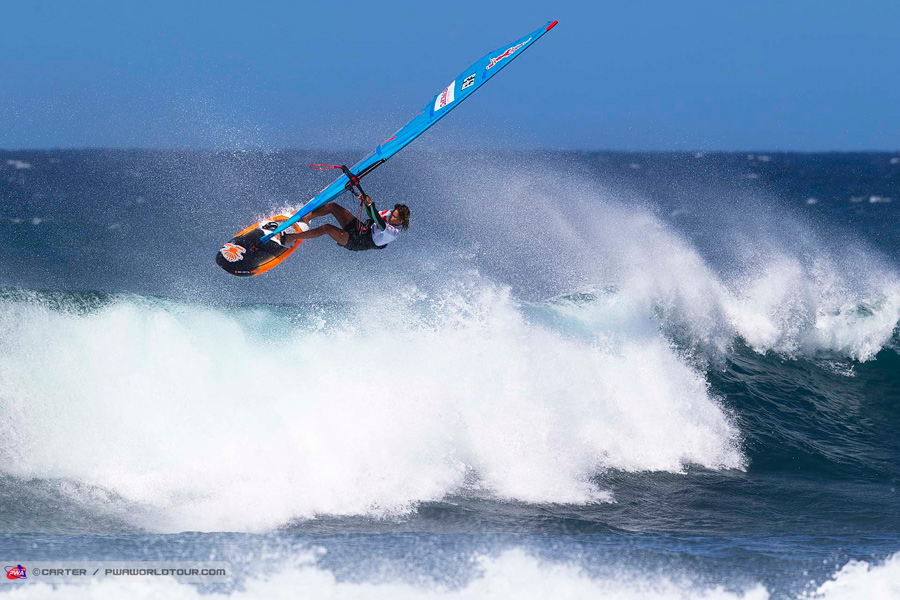 Heat 31, the first men’s heat of the day, was the decisive heat for Thomas Traversa and Victor Fernandez. Thomas, who was at the beach, needed Marcilio Browne to win the heat against the Spaniard Victor Fernandez to secure his title and Victor had to win against Brawzinho to secure his title chances. Marcilio had a lot of drive in his wave riding and picked up wave after wave as the swell was building. He handled the choppy conditions quite well, produced monster spray with his powerful cutbacks and landed a few big aerials off the lip. He as well crashed a few frontside wave 360, but Victor crashed radical Forwards off the lip, too. Marcilio sticked a Taka and won with an overall score of 15.1 points (7.2/7.9) against Victor with 13.09 points (6.62/6.47) and buried his title hopes. 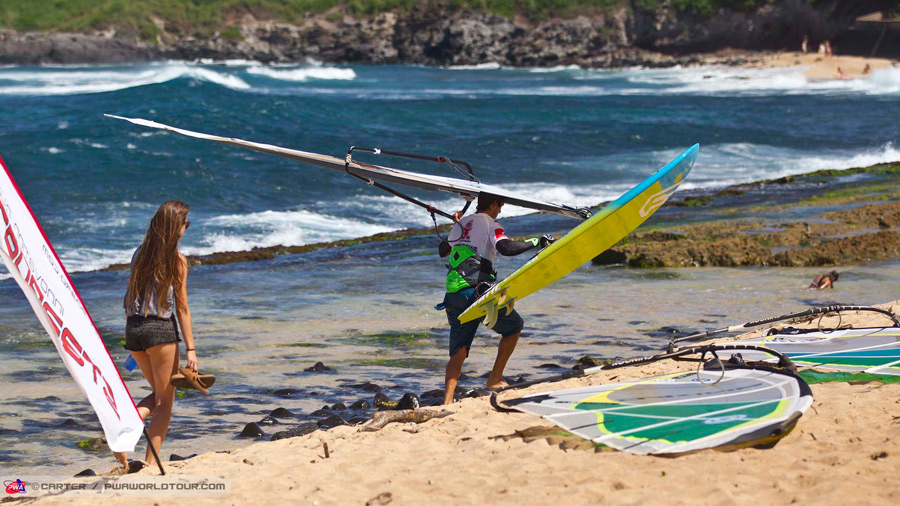 Thomas Traversa started with a very fluid wave ride exactly at the beginning of his heat and he got 8.43 points for the ride. And it needed him 9 more waves to top it all off. With his 10th ride he collected 8.68 points. In total he rode 13 waves in 25 minutes at Ho’okipa. Marcilio almost reached the 17.11 of Thomas with an 8.2 for his 4th and a 8.3 for his 8th wave. In total he had 11 wave scores on the sheets. Marcilio landed an excellent Frontside wave 360 on his 4th wave. Brawzinho tried everything and landed a perfect Airtaka on his last wave of the heat, but in the end Thomas convinced with longer rides and a lot of extremely vertical hits. It was a quite similar situation like in La Torche. Thomas had a really great heat and Marcilio was looking for the big chances, but did not find them. All in all it was an incredible heat to watch. And the scores were really high.

The 2014 world champion with a big aerial (Pic: Carter/PWA)

Thomas was World Champion at this time,  he had a great “warm up” heat against Marcilio and no more pressure. Morgan Noireaux wanted to seal the deal from the beginning on. He hit the lips extremely vertical and broke a foot strap  and he had to sail back to the beach and change the board, but it didn’t confuse him at all. Both finalists were riding around 10 waves in the big final at Ho’okipa. Thomas landed a perfect Goiter after a long wave ride, but crashed another Goiter. This one could have changed the points probably. Morgan had a few rides in the 8+ points section. He earned a 8.48 and 8.07 points for two of his best rides and got better and stronger during the heat. Thomas started with 8.32 points on his second wave, but then didn’t use a few good chances and got blown off the waves.  He was not able to get a second high wave score to win in that heat. “Morgan is a ripper at Ho’okipa. His wave selection is unbelievable,”  Jason Polakow said about his teammate. In the end he deserved to win the heat and the Aloha Classic. It was his second attendance at a PWA event. 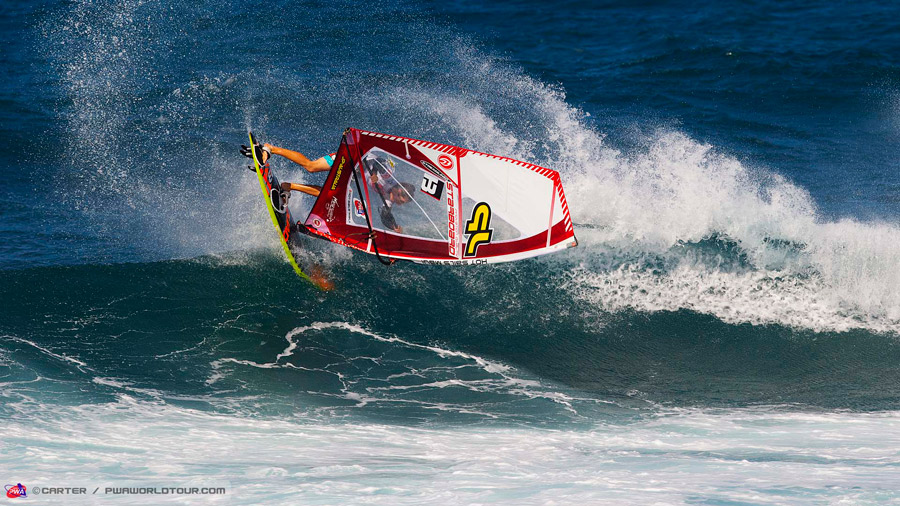 chris2018-05-22T08:01:45+02:00November 10th, 2014|
Subscribe
0 Comments
Inline Feedbacks
View all comments
This website is using Google Analytics. Please click here if you want to opt-out. Click here to opt-out.
0
0
Would love your thoughts, please comment.x
()
x
| Reply
We use cookies to ensure that we give you the best experience on our website. If you continue to use this site we will assume that you are happy with it.OkNoRead more