Victor Fernandez and Daida Moreno are the winners of the 2016 PWA Gran Canaria Wind & Waves Festival. Philip Köster and Sarah-Quita Offringa got second and Jaeger Stone and Iballa Moreno completed the podium. The event saw incredibly strong wind conditions, gusting up to 50+ knots. 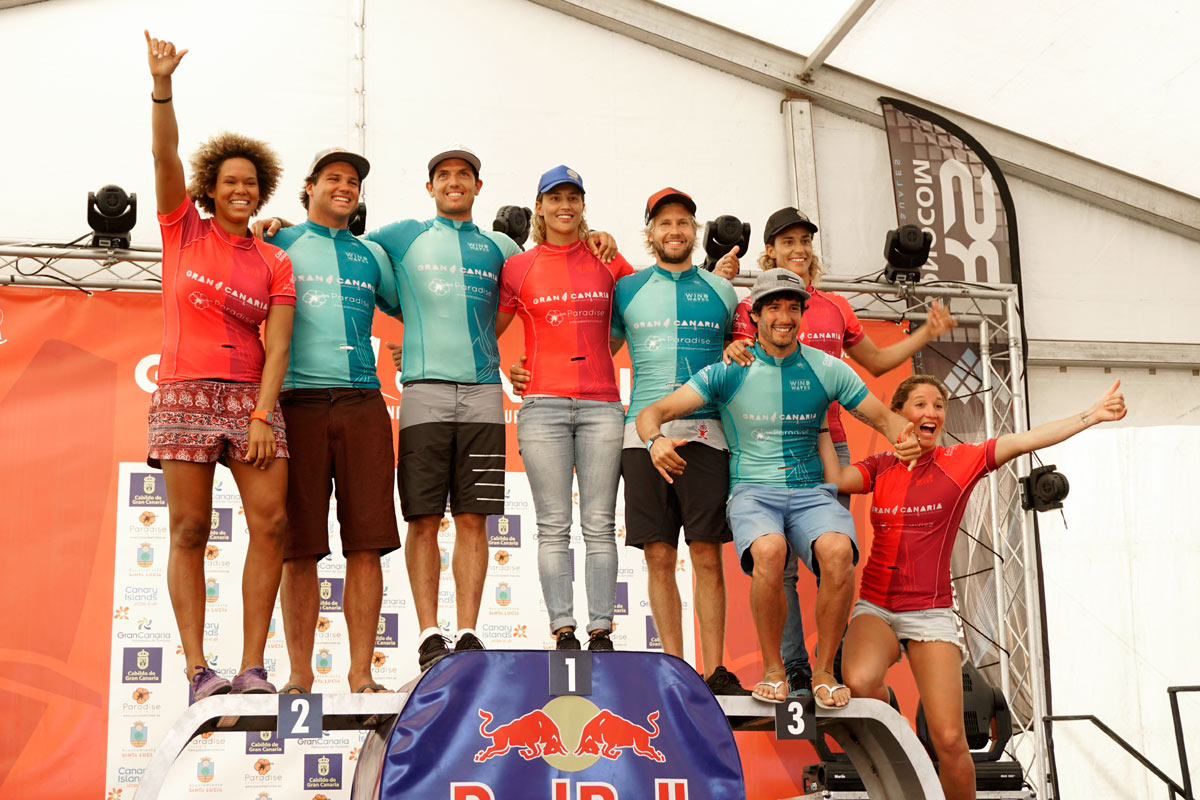 It was a slow start to day 6, the penulitmate day of the event. In the morning it was windy but it was still flat. As soon as the tide started to push, the waves got bitter and the wind picked up to 40 knots again. It was time to recommence the single elimination of the ladies and men. And it got an exciting afternoon. The men had to complete 5 heats and the ladies 4 heats to crown the single elimination winners.

The competition got started with the men and we decided to walk to the bunker on the right hand side of the bay to be closer to the jumps and wave rides.  And the competitors came quite close to the bunker. Alex Mussolini for example landed a Goiter just in front of us in knee deep water.

Victor Fernandez and Philip Köster convinced the judges most and met each other in the final. It was a very close heat and Victor won by 0,25 points difference. Victor showed the better wave rides and Philip the better jumps. But Philip was lucky to still be in the competition as he suffered a back injury from the morning rigging and warm-up session. Philip told us he hardly couldn’t breathe in the morning but thanks to the event physiotherapist, Philip was able to continue the competition. 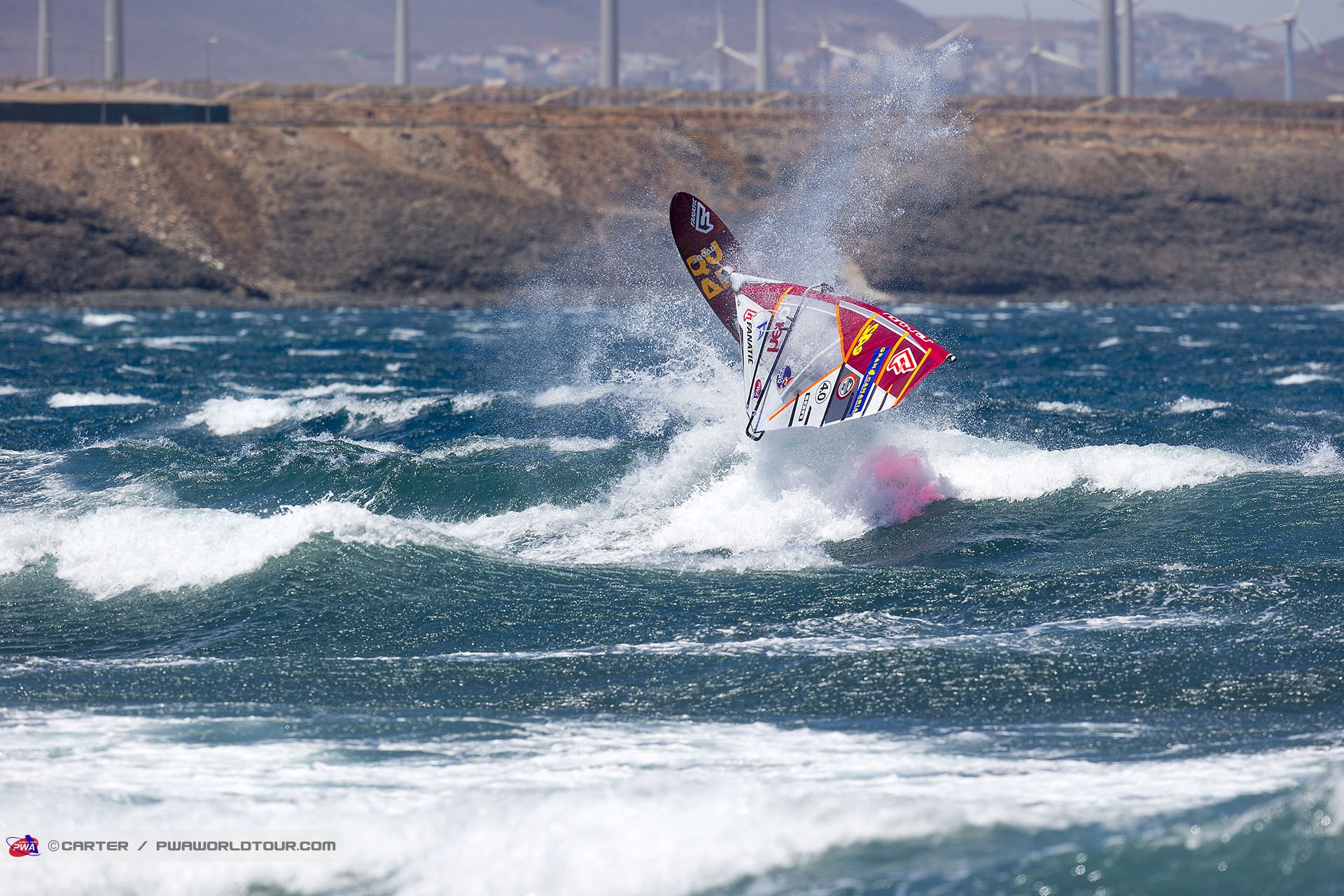 Victor managed to get 10 points for one of his wave rides landing a fast Goiter on the inside. He as well showed a perfect Klei and landed a clean double Forward and a high Tabletop Forward. Philip landed big jumps but missed to collect enough points through his wave rides.

We filmed the final and you can re-watch Philip’s and Victor’s heat: Victor Fernandez vs Philip Köster Single Elimination Final

In the little final Alex Mussolini and Australian Jaeger Stone had a big battle. They both showed the best possible wave riding and milked the onshore hip-high waves to the fullest. Alex went for an extreme Goiter almost on the rocks next to the bunker and Jaeger produced spray like on a good day in WA. For us this heat showed how great the skills of the top riders in waves are and that they can show big tricks even in not so big conditions. In the end Jaeger won in a really close decision over Alex. On equal 5th are Marcilio Browne, Dany Bruch, Thomas Traversa and Robby Swift. 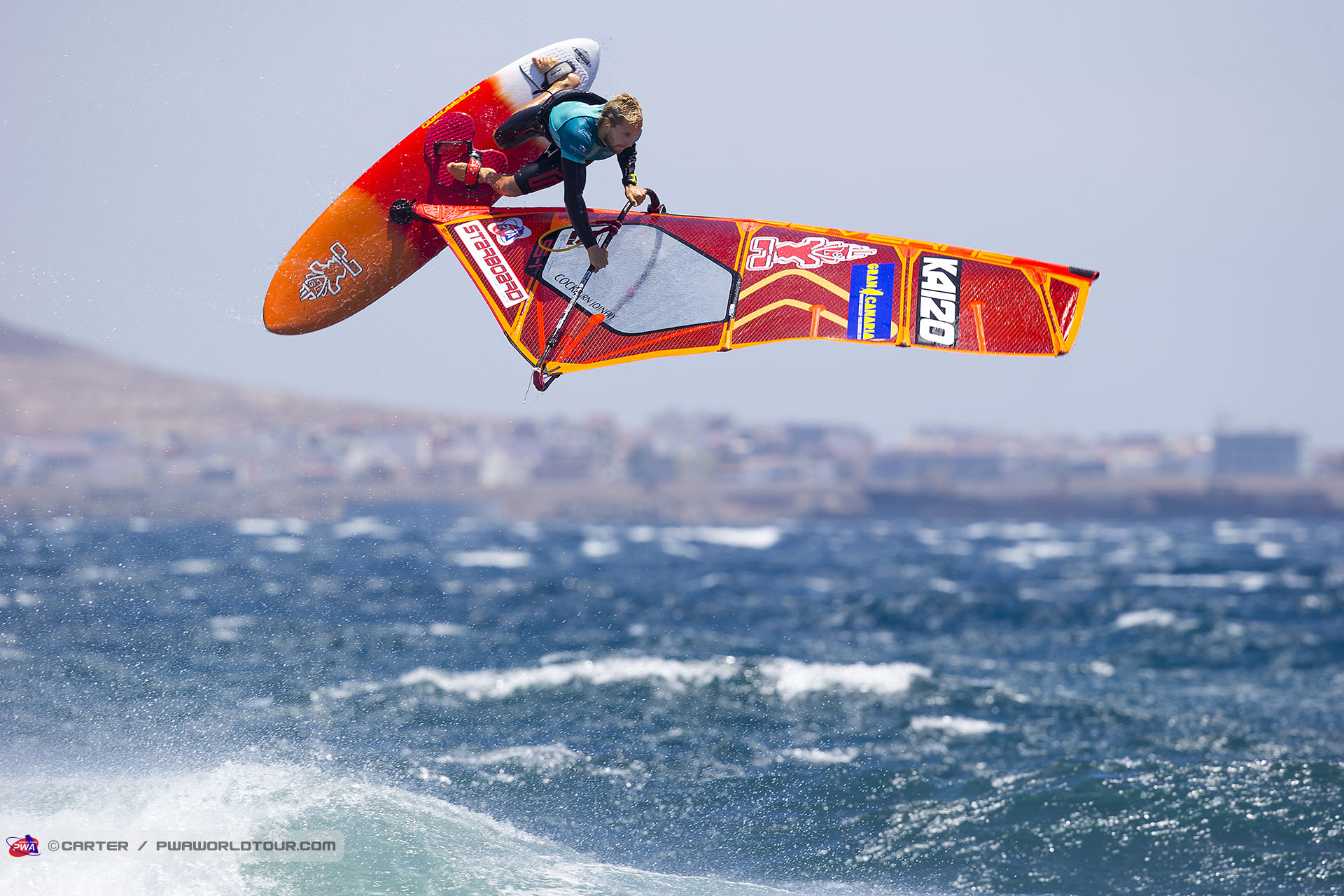 The women were definitely on form and we saw some more action than on the day before as the wind wasn’t so strong compared to the previous day with 50 knots conditions. We saw some big jumps with clean landings and brilliant wave rides. Sarah-Quita Offringa surprised most, landing stalled Forwards, Push Loops and a perfect Taka. The multiple freestyle champion was able to beat Iballa Ruano Moreno in the semi final and made it into a wave final for her first time in her wave career. We need to add that Iballa was a bit unlucky as she broke her front foot strap and needed to change the board during her heat but nevertheless Sarah sailed a great great heat and deserves this victory over Iballa.
Daida Ruano Moreno was Sarah’s opponent in the final of the single elimination. It’s hard to beat Daida as she is so incredibly consistant in her air moves and milks the waves like no other lady does. Daida took the victory over Sarah-Quita in the final due to her great scores in jumping – she landed a perfectly tweaked Push Loop, a great Back Loop and a one-handed Forward Loop. And she added a 9.5 wave ride with a frontside Aerial.

Iballa Moreno sailed a great small final against Amanda Beenen, who definitely improved over the winter. Iballa showed a good Forward, a clean Push Loop and solid wave riding. Will be interesting to see if Iballa can fight back for the top spot on the podium in the double elimination.

Straight after the single elimination the PWA crew started the double elimination and 6 heats got completed. The conditions in the double were tricky. The wind got a bit inconsistent and it was hard to find longer waves or steep ramps to jump.

Unfortunately this was the end of the event, as the wind totally disappeared for the final day of the event.

Altitude windsurfing – Peru
5. December, 2020 by tom from the museum
Aloha, here you can find info about the first (and only maybe) windsurfing crossing of rhe ...