Australian Pro Racer Sean O’Brien reports from the final day of the Formula Windsurfing World Championships in San Juan, Puerto Rico. Read more about the exciting final and have a look on the final results. The event was dominated by Antoine Albeau, who took the title in the World Championships, which saw the maximum of 15 rounds. But the fight for the rest of the places on the podium was an extremely tough one! 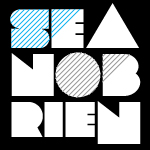 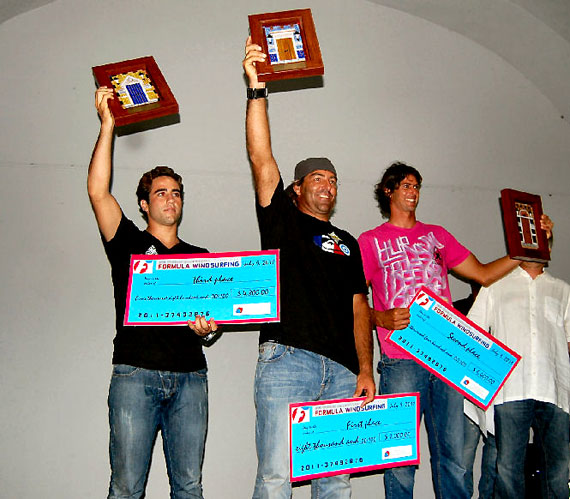 Today was Arnon Dagan’s day. We knew it as soon as we got up this morning; cause he was as nervous as a highschool kid meeting the President. We had 4 races scheduled today in winds around 10-12 knots for the first race but building up to 18 knots by the end of the day. I had a horrific start to the day breaking some battens in the first race then crashing into someone on the second start and breaking my mast. Basically 2 DNF’s as far as my results go, but managed to have 2 solid races to finishes off the event, still ended up way down in 22nd place due to the races I wasted breaking things; argggh… Anyhow, I know I can get solid top 15 results when it goes my way so that’s nice to walk away from the event with. 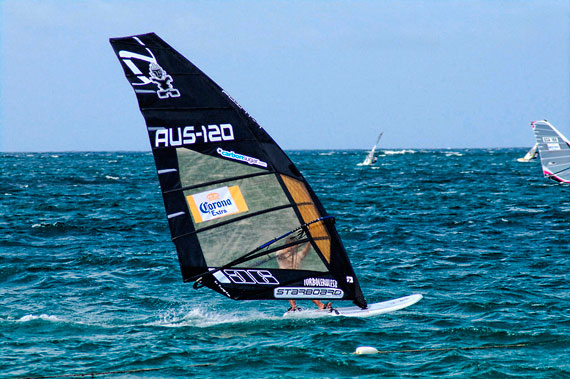 Sean on the final day heading upwind, finishing in 22 overall.

Arnon the Conqueror: Taking 3 bullets from 4 starts today he finally showed us the dominating speed he had whilst we were testing the week before the event. Arnon dragged back 2nd overall after today, which is his best result in a FW World Championships and knocking out the super consistent Brazilian Gabriel Browne, the brother of wave acrobat Marcilio Browne, who had a couple of 4th’s and a 7th today to keep on the podium in 3rd overall.

Argentinian Gonzalo Costa-Hoevel, Australian Steve Allen and Jesper Vesterstrom from Denmark also had a solid day today, making up 5th, 6th and 7th overall with big man Paulo Dos Reis finishing ahead of them in 4th despite crashing in to me on port in the second last race today. The guy does not stop for anyone, but luckily he’s a nice guy and none of us fell off, so a protest was unnecessary. 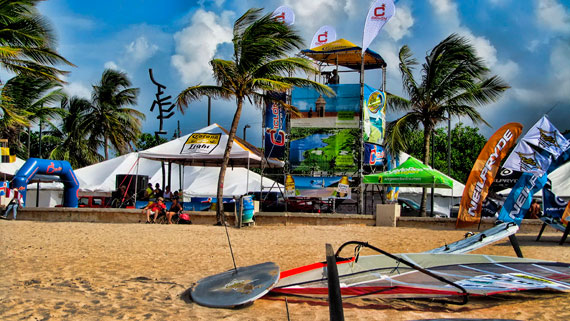 The beaches are nice on Puerto Rico (Pic: Sean O´Brien).

Michal Polanowski, the Pole, blitzed the last race in style. He started at the boat just behind me on starboard, but pointing a little higher managed to get above the first reef at the layline and not have to dip as a few of us were doing, who were lower and was around the top mark first and was never really challenged to the finish – winning the race by over 15 seconds to Gonzalo Costa Hoevel, who came in the 2nd !!

Dennis Littel was on the beach all day today keeping track of the racing and looking positive. His knee is still really swollen and he’s unable to walk on it! A week before, Casper Bouman volunteered to take Peter Bijl’s slalom gear back to Holland with him as Peter’s gear arrived in Puerto Rico from the Aruba event, but Peter injured himself in Aruba and was unable to compete here. With Casper bailing early after his injury, Dennis thought he’d take up the slack. Not sure how he’s going to survive taking 9 bags with him back to Holland when he can’t walk :-/

Following the racing we all got on the event bus and headed in to old San Juan for the Prizegiving Ceremony. On arrival in the ‘Green Building’ right in the centre of town we were gifted to a fantastic dinner with a whole pig roasting on a spit as well as a variety of other foods including nacho dip in a corn-chip cone (like a Nacho ice-cream!) and plethora of beautiful girls handing out beers from the event sponsors Corona.
Was exciting to see some new faces on the podium in the various divisions! Despite the low numbers, the girls fleet was super competitive, as was the Youths and Grand-Masters. Steve Allen muscled out old-man Micah Buzianis to take the Masters division. Congrats to Marion Lepert, who took the title in the ladies class just with 3 points in front of Morane Demont. In third came Ania Sofia Cardoso

After the prizes were handed out, we sat in downtown Old San Juan Saturday-night-traffic for about an hour trying to get 5km down the road to the Sheraton Hotel, where a huge party was kicking on at the rooftop pool-bar (which was a massive expanse of rooftop with 5 pools, live-bands and plenty of bars). Too bad you can’t cash-in a big novelty cheque as we were rolling with the podium winners Antoine Albeau, Arnon Dagan and Gabriel Browne.

I guess when we arrived at this event we weren’t entirely sure what to expect as not many of us had been here before, but after what we’ve seen here the past 2 weeks I think a lot of us will be back next time!

Puerto Rico definitely put on a great event and the conditions during the week were very conducive of great racing.

Very easy to run a great event when the wind blows every day, but even then, Puerto Rico definitely put on a great show and the locals took that extra step to help out a lot of us sailors with all sorts of non-racing related requests we had! Big shout out to Jose, Arturo and Nono who gave Arnon, Steve and I a big helping hand during the past 2 weeks with all our gear and dramas!! Not really sure how Jose managed to go getting people to the airport at 4am on Sunday morning!
For me now its flights back to Milan, stopping in New York to catch up with Jesper Vesterstrom for a few hours – he’s based there now – and getting ready for the PWA Fuerteventura slalom World Cup in 10 days.
Thank-you Puerto Rico !!!