Sean O’Brien reports from FW World Championships in Puerto Rico Day 3 – no races, but new rules through the AGM 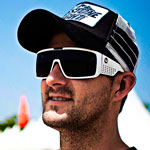 
Not too much to report from today… Rain was forecast for the entire day and that’s what we got. Bruno delayed the first start until 1.30pm after arriving to a glassy beach so most of us retired to the apartments to catch ‘How I Met Your Mother’ which was on at 11.30am (such a good show). Arriving back at 1.30pm there was a little wind building but some dark storm clouds on the horizon. Bruno pushed the first start to 2.15pm and many guys rigged 12.0?s but in front of the clouds came a pretty big squall and the rest of us still on the beach deciding what to rig watched the first few guys sail out to the course completely lit-up in their chicken-straps heading downwind to the start. 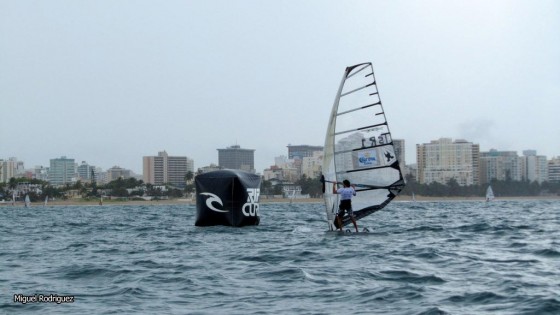 As soon as the squall finished, the rain hit and the wind dropped. We were held out on the course for another 20 minutes while the wind played with us before Bruno finally tried a start which ended being abandoned when the wind cut out to 5 knots on the startline. Another hour on the beach waiting and we were sent home with an early mark around 3.30pm to enjoy the rest of the rainy day.

In the evening after racing we had the AGM for Formula Windsurfing Class. A lot of interesting proposals were on the table so I’m going to briefly talk about each point and what was discussed over the meeting:

1) Change the fins from 3 to 2 at events = YES.? This was a fairly unanimous decision that we want to change the ‘perception’ of formula that its expensive and gear-heavy to get in to. We already know the Pro’s are going to buy 2-4 fins of each brand and test the lot, but what about the amateurs who make up probably 80% of the class? On the flip side we DON’T want fin manufacturers to sell LESS fins! We want to support the people who support us, so I think by voting this in, people will feel more competitive only owning 2 fins and most people may still buy 3 fins and register the perfect 2 for the event.

2) Change the sails from 3 to 2 at events = YES.? This was always going to be an interesting one. On paper it was actually my proposal, but it came about from discussions with many Pro’s and at local events I have been to around the world in the past 6 months. It was also something the AWA (Australian Windsurfing Association) agreed with however later we had a re-vote of more ‘FW orientated’ sailors within Australia (not all of the AWA committee are active FW sailors) and Australia voted NO to it. Lots of interesting discussion came about from this proposal. Sailors in Poland and Brasil were heavily for it as this apparently had been a deterrent for many sailors, who’ve left the class in recent times; also with many parts of the world still effected by the Global Financial Crisis, reducing the cost of equipment to be competitive in this class is a big step forward.
The voting was very split and this proposal only got up by 2 votes. There is still some discussion going on as to when this will be phased in …

3) Make all sails a solid colour (ala Point-7, North etc) = NO.?This was decided it would be too difficult/expensive to implement.

4) Build a new Marketing Strategy for the FW Class = YES.? There wasn’t one person in the room who didn’t agree with this proposal, however the details in the original submission were a little ‘broad’ and ambiguous. The people at the AGM voted that we build a sub-committee to work on this strategy separately. To me that’s a waste of time, something should just be done INSTANTLY as what we have now is almost ZERO coverage and we need to build some kind of platform that the organisers of events can leverage from … Not sure how this will pan out as a result …

5) Allow an ‘Open Development Class’ to operate alongside the FW class at events = NO.?I think this proposal was completely misunderstood by everyone at the meeting. The suggestion wasn’t to allow full custom equipment by every sailor at a World Championships, it was that in National events, there are some local board builders and DIY sailors who’ve built/customised their own boards and want to use them. Normally they are banned from events with these illegal boards but the proposal was that we have a separate division and start for them to allow them to compete. In a sense, we’ve been doing this in Australia for 3 years already; targeted at getting new people in to the class and letting them use any board they want, generally speaking this has fostered new sailors to get in to the sport and purchase the ‘right’ equipment down the track. It hasn’t affected any of the racing for the top guys even though we let them all start on the same line in the same sequence.
A VERY interesting meeting last night and lots of decisions that will definitely change the class around a bit next year came in to play. I think all the decisions were for the better of the class but it will need some careful thoughts during development of next year’s equipment to make sure it benefits both the light/heavier sailors and the amateurs all the way to the Professionals.

Now let´s have a little preview on the next day already, when 4 full rounds took place, what means, that 11 rounds were sailed already. Antoine Albeau still has a clear lear, but young Gabriel Browne from Fortaleza started the turbo boost and jumped up to the second place with an incredible performance followed by Paulo dos Reis. Arnon stepped down from the top 3 to 4. Micah Buzianis cold win a single race. Congrats! In the ladies class Morane Demont puts a lot of pressure on Marion Lepert and came very close to the leading with three bullets. More detailed updates will follow very soon from our man Sean O´Brien, who sits in 21st position at the moment. Very solid Mr. Sean. Bad news we received from Dennis Little, who also ended up in the hospital. All the best to Dennis and also to Casper Bouman, who hurt his arm some days ago heavily!