In the morning the wind was quite light and it looked like there should not be any races while the 4th event day. The plan of the racecrew was to hold at least race number 9. And the elimination 9 happened later the afternoon and saw Finian Maynard as the winner! 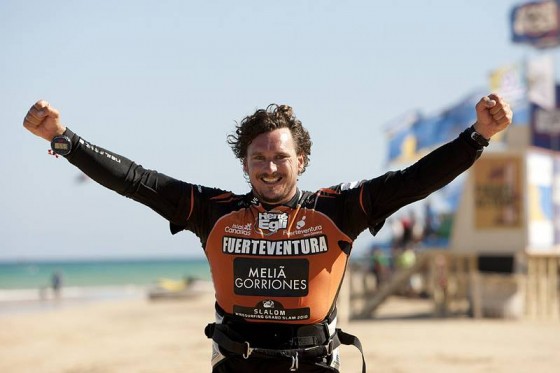 It took a long time until the wind picked up. At a quarter to 16:00 it was strong enough. 15 to 20 knots on the course made a start possible.

Heat 10 brought a big surprise. Antoine Albeau crashed at a jibe mark in clear lead. He lost the boom when shifting the sail and had to waterstart again. 4 riders passed: Steve Allen, Sylvain Moussilmani, Micah Buzianis and Kasper Larsen. 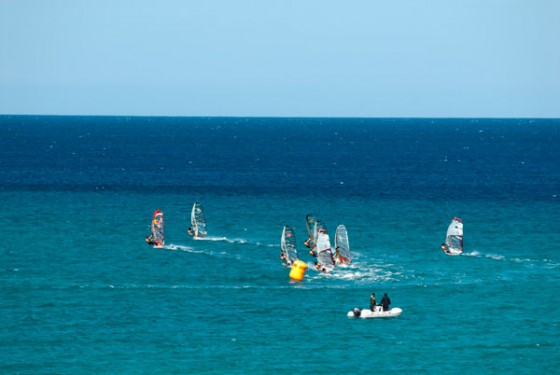 The winners final saw a tough fight of Finian Maynard and Björn Dunkerbeck. Finian, who was in a great mood before the start and convinced to win, had great speed plus a good start. Dunkerbeck fought very hard and took the closest possible way around the marks. Overall Maynard dominated in terms of speed and took the victory in the 9th elimination. Björn finished in 2nd and made it overall in 3rd position overtaking Cyril Moussilmani in the overall ranking. He is the only rider of the whole fleet, who made it to all finals so far. Micah Buzianis, Slalom worldchampion from 2005, made it into third position. Patrick Diethelm surprised with a 4th position and Ludovic Jossin made it for the first time into the final and finoshed in 7th position. Kevin Pritchard made it with a solid run in 5th.

For tommorow – it will be the final eventday – the windforecast does not look too promising, but still there is a chance to get one or two more races done. Skippersmeeting will be held at 10:30 with a first possible start at 11.00. Last possible start will be at 18:00! Tomorrow the registration for the freestyle event will be on from 13.00 to 15.00.