The windforecast for the second competition day at the PWA Slalom in front of the René Egli Center 1 was not the best. But it got better than expected and the race crew set up a nice 4 mark downwind Slalom, which saw the first elimination started at 10.00. The wind was in between 15 and 25 knots and went up in gusts up to 30 knots while the day. Most of the sailors were on sizes in between 7,0 m and 7,8 m and their smallest board. 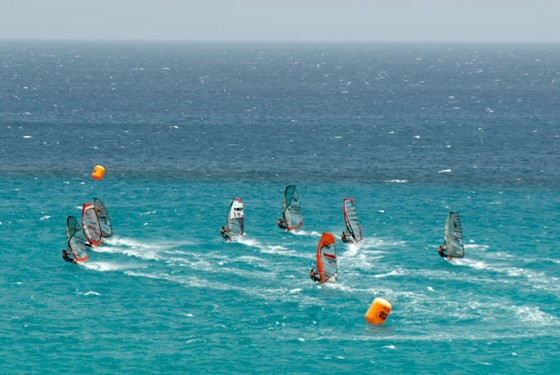 Eventleader Cyril Moussilmani missed the winners final by one position and Antoine Albeau took the victory in the first elimination of day 2, the fourth race of the event, followed by Finian Maynard and the young French Pierre Mortefond. He had the best PWA result of his young Slalom career. Congratulations Pierre!!

Cyril took the victory in the loosers final. 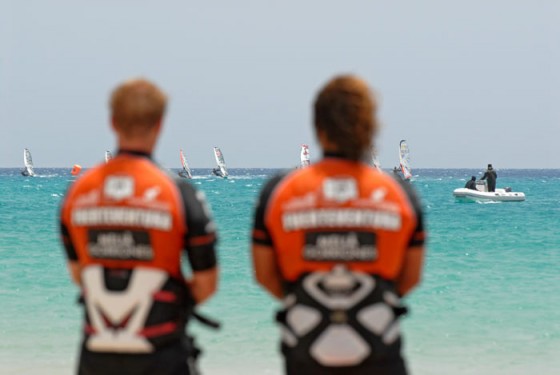 Around 12:30 the second elimination of day 2 got started. And again we saw a dominating Antoine Albeau. His Boss Martin Brandner and JP Shaper Werner Gnigler were on the beach helping their team to prepare their boards in the best way. Albeau wins elimination 5 in front of Cyril Moussilmani and Björn Dunkerbeck, who had his best result in this event with the third position.

Arnon Dagan from Israel could win the Loosers final. 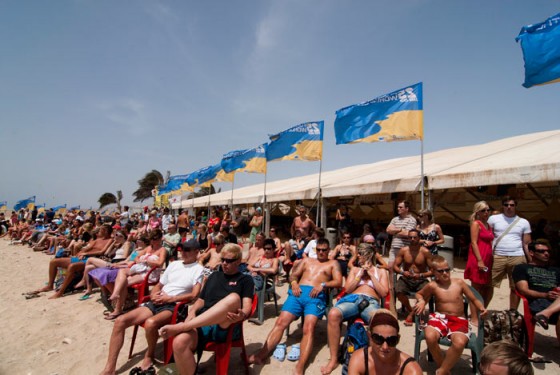 Big crowd on the beach

In elimation 3, which was underway at 15:00, we saw an identical situation. Antoine Albeau dominated and could win the third elimination of day 2. “It was a good day, really a good one,” he commented his performance of today. Elimination 6 he dominated and was winning with a clear lead, followed by Finian Maynard and Micah Buzianis.

Albeau took the lead from Cyril, who is in second overall position now. In third follows Finian Maynard.

Now are only two racer left, who made it so far to all finals: Antoine and Björn. Let´s hope to get some proper wind tomorrow