The wind was up early in the morning already. And the direction of the wind was less offshore and little swell was running towards the shore of Sotavento. At 10:30 the PWA started to continue the double elimination with the second round. 18 heats had at least to be sailed to know the final winner of the event. The tension was high on the beach and on the water. In the end it was again Gollito Estredo, who took the eventvictory and the PWA freestyle worldtitle 2011. 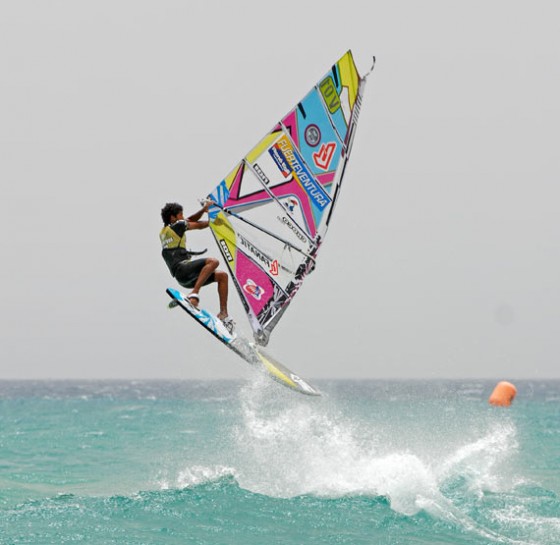 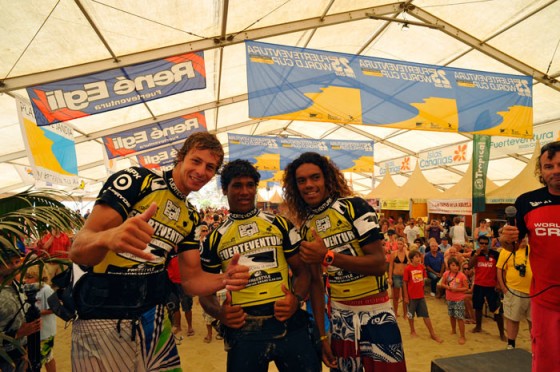 From the first heat on the quality of freestyle sailing was amazing. Philip Köster nailed a perfect double Forward loop and a very clean Toad against his fellow countryman Adrian Beholz. Phil Soltysiak stopped Philip in the next round and one round later Pedrani, who came up against Joao Barros and later against Davy Scheffers, who had bad luck breaking a brandnew mastbase. Yegor Popretinskiy also convinced against Finies and 15 year old Schmit, but got eliminated by a very strong performing Antony Ruenes, who not even has a sailsponsor, but sailed in the top 10. 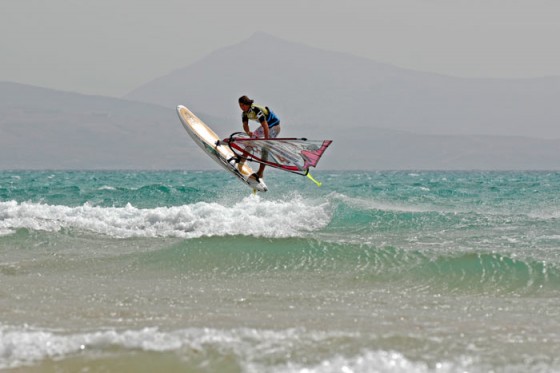 Also in the top 10 made it Dieter van der Eyken, who sent Austrian Michi Rossmeier and Greek top freestyler Stam Promponas back to the beach. Quincy Offringa, who improved a lot compared to 2009 and had won a lot of consistancy through out one year could beat Dieter in a very close 2:1 decision. The young Belgian rider landed a perfect Airflaka and a double Spock, but Quincy, the brother of female Freestyle worldchampion Sarah-Quita, convinced with very clean moves through his whole heat and made it into the top 8 facing Bonaire based top freestyler Tonky Frans. Phil Soltysiak could beat Nicolas Akgazciyan with a lot of perfect landed powermoves like big Toads and massive Shakas and had to battle it out with the surprising Frenchman Leo Ray, who sent an today excellent sailing Max Rowe back to the beach. It got really close, Leo, the only top Naish sailor, liked the wavy coditions, landed a clew first Backloop, but realized while the heat that his board was cracked. But he got more points than Phil and made it into the top 6. 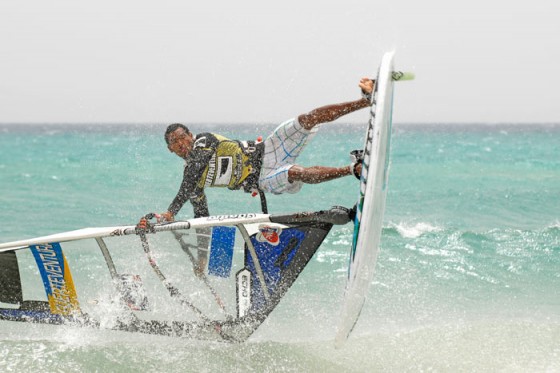 Tonky Frans did a firework of airmoves, like Air Chacho, Forwards, Pushloops and stopped Leo´s run. From the moment on Tonky was on the water the tension increased and the spectators were entertained a lot. The airshow was on! In the following heat the big fight of the Frans brothers followed: Tonky faced Taty. Tonky, already warmed up from his previous heats continued with massive airmoves. Taty did not so good in his run and lost. Kiri Thode was the next opponent for Tonky, who made like always a big show in front of the hundreds of spectators. He gave cool statements to the micro of speaker Roberto Hofmann in between his heats and tried to motivate himself to go bigger and bigger.

Kiri kept his system of sailing a freestyle heat and went for double combos and no airmoves. Suddenly he realised that Tonky went for big airmoves again and tried to land a Backloop and a clew first Backloop, but did not land both very clean. So he continued with a fully planned Toad and perfect Konos. But it was not enough for Kiri. Tonky advanced jumping around on the beach expressing his happy feelings. He knew that he made it into the top 3 this time. 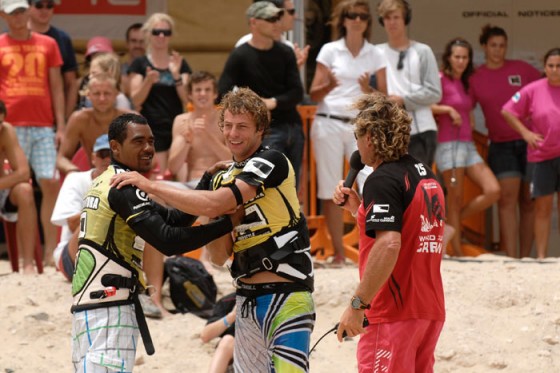 Tonky and Steven on the beach - Pic: Kerstin Reiger

Tonky´s heat number 6. Steven van Broeckhoven was his opponent. An extremely tactical heat followed. Steven was fresh and looked more active on the water investing time in very difficult pure freestyle tricks and made it into the final in the double as well.

Should the EFPT champion challenge the world champion in the final? Yes, he did! 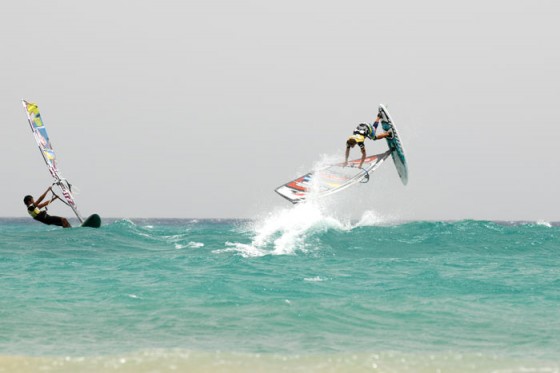 Gollito vs. Steven in the final - Pic: Kerstin Reiger

Steven could win his heat on the way in, but Gollito convinced more on the way out with a massive Shaka at the start of his heat and an incredible Pushloop Flaka. Steven landed a Culo, an Airfunnel Puneta, a Burner Puneta and a Kono. Gollito took the second event win in 2010 after Lanzarote and also secures the 2011 PWA Freestyle Worldtitle. Kiri stays on his heels, but it´s impossible to catch Gollito in 2010. But, there are several riders, who could make it still on the podium.

The next and final event will be at the beach of Westerland, Sylt, Germany from the 24th of September until the 3rd of October.