We saw a lot of wind on day 4 of the PWA Freestyle event at Sotavento. Gusts went up to 40+ knots. Most of the sailors were on their 4,0 m sails or smaller. The PWA decided to run the single elimination until the semi final, did a one hour lunchbreak and continued afterwards with the first round of the double before the two final heats got sailed. Gollito was on fire and faced the EFPT champion Steven van Broeckhoven in the today´s final. Gollito kept the nerves and took the victory in the second single. Kiri, the winner of the first double elimination came in third and Taty in fourth position. 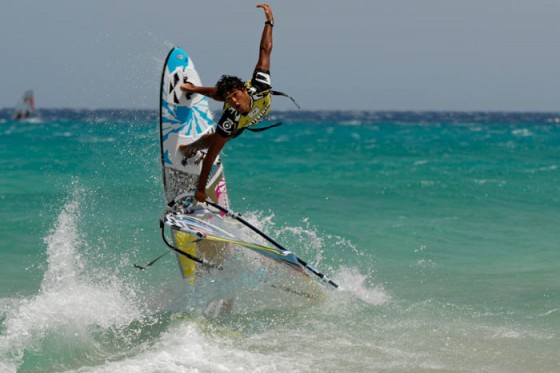 Around 10:30 the PWA started the first heat in the second round of the second double elimination. 15year old young Youp Schmit convinced with strong sailing and kicked out Joao Barros Ferreira. He made it in the top 16. Also in the top 16 made it Max Rowe, who sailed extremely safe and Daivis Parternina, who could kick out Björn Saragoza, who changed from his 4,0 to the 4,5 again, because he had problems with his pure wavesail compared to the progressive Bolt model. The sail was too big and Daivis sailed very solid. Björn lost. 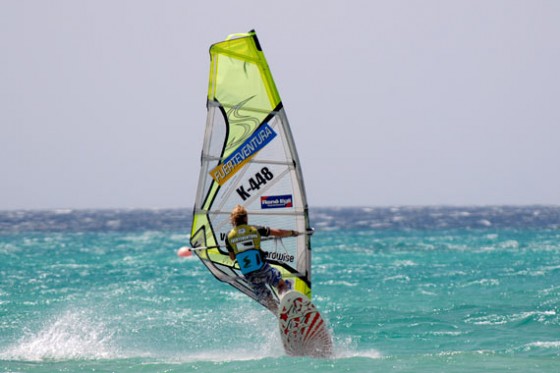 Davy Scheffers kicked out Yegor Popretinsky, but got stopped by Steven van Broeckhoven in the next round. Steven continued with an impressive show – extremely dynamic Shakas, Airfunnels and super high Konos – and defeated super stylish sailing Tonky Frans and yesterday´s winner Kiri Thode. Steven made it this time to the final of the second single elimination and proofed, that he is definitely the best European sailor, who can challenge the top freestyle pros from El Yaque and Bonaire. 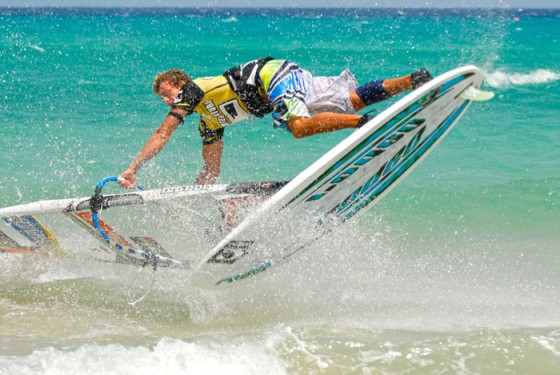 On the top of the elimination ladder Taty Frans eliminated young Italian Mattia Fabrizi, who sailed technically very well. Afterwards he sent Dieter van der Eyken and Leo Ray back to the beach. Leo sailed tactically very well again, sticked the right number of moves on each tack and finished 5th in the single. He is definitely one of the surprises. Also in the top 5 made it Nicolas Akgazciyan, who proofed his high quality sailing and big consitancy against his fellow countryman Antony Ruenes. Gollito Estredo stopped Nicolas with a phenomenal heat and faced Taty Frans in the semifinal. 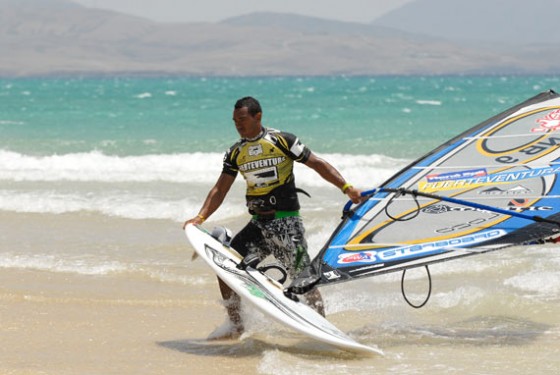 At 13.10 the PWA racecrew held a one hour lunchbreak and started at 14:15 the first round of the second double elimination. The heat between Mattia Pedrani and Maarten van Ochten was an outstanding one, which got won by the Italian Pedrani. He definitely felt comfortable in the 40 knots strong gusts and only crashed once. Philip Köster also made it up in the second round with a good performance. He definitely defines new, what a fully planned forward loop is.

Straight after the last heat of the first round of the 2nd double elimination got completed, a 20 minutes long warmup period for the four finalists followed. 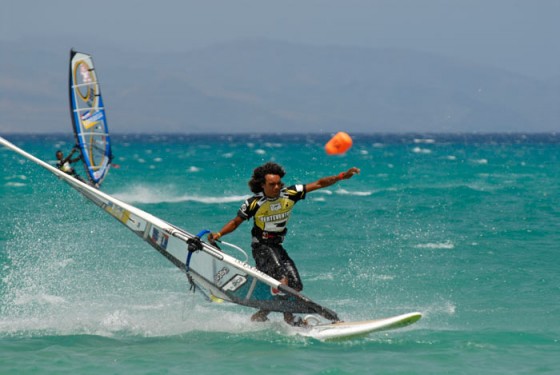 Taty and Kiri met in the b-Final. Taty took a lot of risk but missed it to get enough moves on the way in. On the way out he almost landed a double forwardloop.

Kiri answered with a fully planned Toad and a nice Kono. Both had wild Airflakas on their judge sheet. In the end it was Kiri, who got more points and could make it on the poium again. Also in more rough conditions compared to the previous days Kiri stayed very stable and landed all his moves with an extreme consistency. 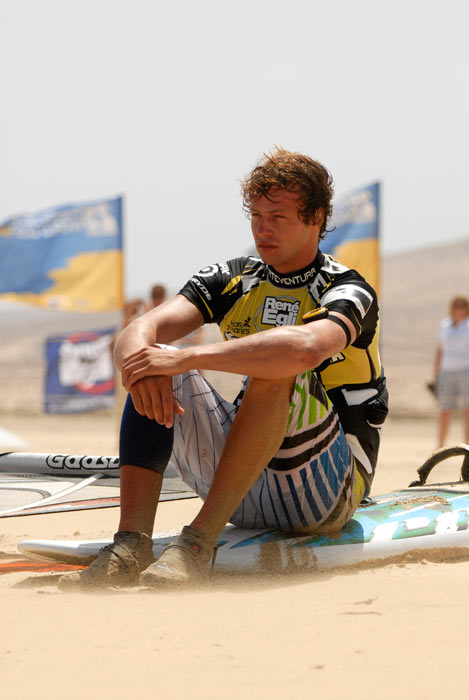 The final in between Gollito Estredo and Steven van Broeckhoven was a long time expected one. The current European champion against the current Worldchampion. Steven took a lot of risk and went as high as he could.

Steven´s final: The King of EFPT started with a nice onehanded Burner (in), but crashed a massive Shaka immediately afterwards. The next Shaka (out) went fine, followed by an extremely well planned Ponch (out). Then he crashed a Kono. He hooked in with the sailtop. Then he went for an Airfunnel 720° (in), a massive Airflaka (out), which he spinned out at the landing, crashed a forward loop very hard, went for a perfect Culo(in), a ok forward Loop (out), a normal stance Kono (in) with almost no speed, a Flaka (out) on the way out and a Skopu (in) on the way in, a good Airchacho attempt.

Looks like it was quite close. Gollito impressed with massive airmoves like the tweaked Pushloop and a very high fast rotated Airflaka. Steven definitely had his strongest moves on the way in with a massive Culo and an Airfunnel 720°. It was definitely a great final. 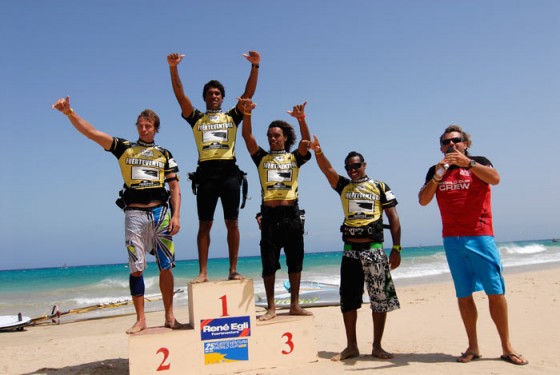 18 or 19 heats are missing to have the second double double completed. If Gollito should win the second double plus Kiri would make it into second position tomorrow, both are equal in points. So, if there should be enough wind, another final must be sailed. That´s what the PWA rules say. If the wind will be as good as today, we can expect the start for 10:30 and the final for the early afternoon around 13.30 to 14.00. 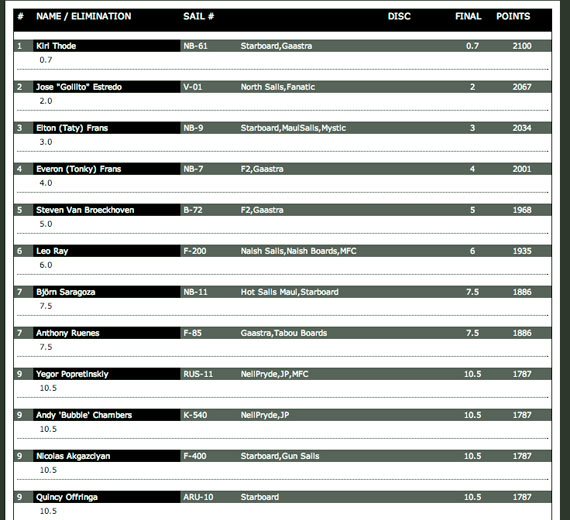 The current result after the first double elimination (Source: pwaworldtour.com)