While the morning hours, the first possible start was scheduled for 10:30, but racedirector Duncan Coombs had to postpone the start by 80 minutes, until the green flag went up for the very first time. And then 25 heats followed and the victory of Kiri Thode, who could defeat the winner of the single and current worldcup leader Gollito Estredo twice. 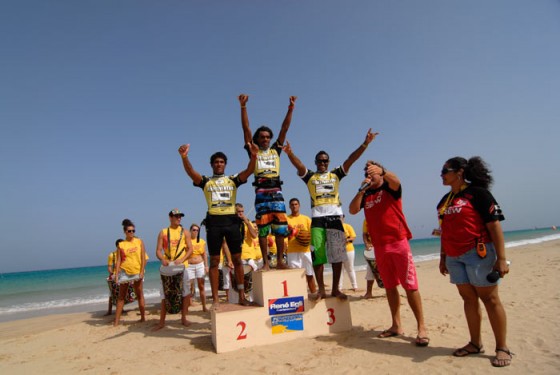 The winners of the Double Elimination - Pic: Kerstin Reiger

While the first heat we already saw that Leo Ray will make a strong comeback in the double, winning against Hasulyo, Fabrizi, Zan, Barros, Chambers, Ruenes. The Frenchmen lost against Steven van Broeckhoven, who had sent an amazing sailing Björn Saragoza back to the beach in his previous heat. It looked like Steven, the king of EFPT, could go for the podium, but Taty Frans sailed very solid, landed fast combos. Steven missed two moves on the way in and lost. No podium, but extremely powerful moves, especially 2m high Konos and Airfunnels, which couldn´t be landed harder and better.

Taty Frans had another incredible heat against his brother Tonky and proofed again, that he could be the new worldchampion in 2010. But Kiri stopped his colleague from Bonaire and really focused on the final standing at the beach fully concentrated.

In the first heat Kiri landed on the way in following moves: Double Spock, Funnel 720°, Funnel Canabrava, Toad and an excellent Kono

Gollito had some problems in his first heat and abandoned his heat after 4:00 minutes and sailed back to the beach. Kiri finished the 7 minutes long heat at 05:30 minutes.

The Venezuelan worldchampion lost his heat with following moves:

Gollito sailed back to the beach, changed his wetsuit and sailed out to get ready for the re-sail of the final. Kiri tried to concentrate standing on the beach again. 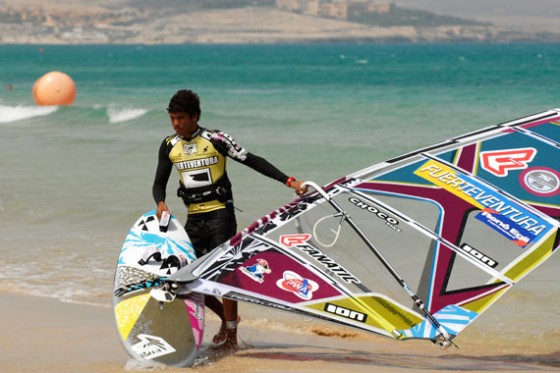 Gollito comes back to the beach - Pic: Kerstin Reiger

Kiri had another solid heat with following moves:

Gollito had a much better heat, but still not his best one. On the third day of the PWA Freestyle event at Sotavento he somehow could not get on fire as he did a day ago. 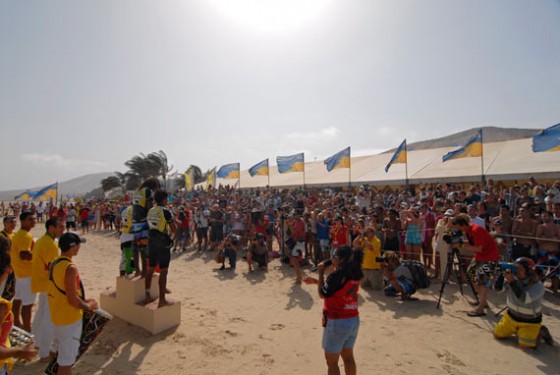 Hundreds of enthusiastic spectators came quite close, when the result got announced directly at the beach. 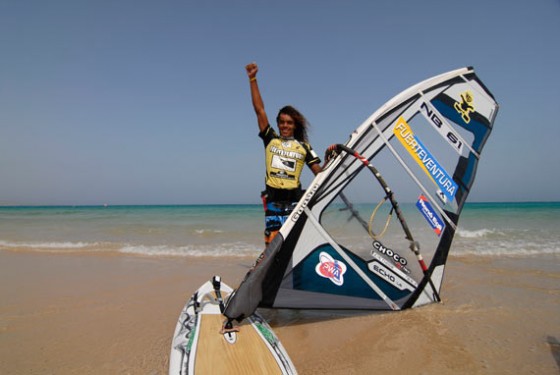 At 17:35 the second single elimination got started. The first round with 6 heats could be completed. In extreme windconditions, with more than 40 knots, we saw a great comeback of Davy Scheffers, who kicked Marteen van Ochten out of the competition in the first round.

chris2010-08-04T13:08:09+02:00August 1st, 2010|
Subscribe
0 Comments
Inline Feedbacks
View all comments
This website is using Google Analytics. Please click here if you want to opt-out. Click here to opt-out.
0
0
Would love your thoughts, please comment.x
()
x
| Reply
We use cookies to ensure that we give you the best experience on our website. If you continue to use this site we will assume that you are happy with it.OkNoRead more