The first day  of the 2010 PWA Freesytle event at Sotavento, Fuerteventura, started with light winds. There was absolutely no chance to run any heats. Around 15.00 the wind picked. Relatively strong gusts blew over the eventarea cross offshore towards the Atlantic ocean. The fleet of 41 riders went for a warmup and had a very hard time to find good control in the super gusty conditions. The top guys impressed with incredible moves. Current worldchampion Gollito Estredo impressed with no handed Ponch variations and Taty planned through incredible Toads. Steven van Broeckhoven landed almost all Burners, he executed. 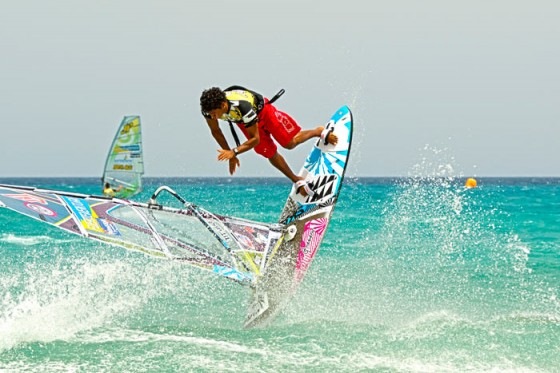 Gollito Estredo on a no handed mission (Pic: Kerstin Reiger).

At a quarter to 16:00 the first heat was on. The rider had to sail in the best trick format with 4 out of 7. The heat duration was 6 minutes.

The first round with 6 heats of 4 riders could be finished. Let´s have a quick look on each heat: 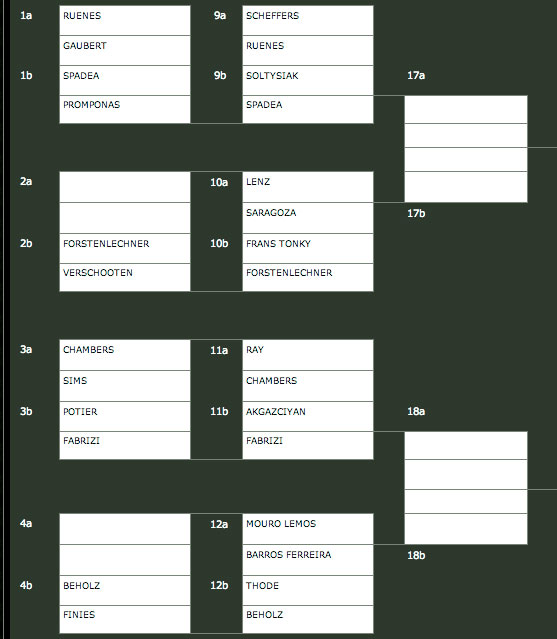 The first three heats of day 1 at Sotavento (Source: pwaworldtour.com).

In heat one, it was quite light, Antony Ruenes had a solid run, impressed with a nice Shaka in the light winds and was planning a lot and could beat Gaubert. Stam Promponas, a well known EFPT rider from Greece gave the Italian Nicola Spadea a hard time. In the end it was Spadea, who convinced the judges most.

In heat 2 it was the Austrian Forstenlechner, who sent the Belgium rider Jordi Verschooten back home to the beach. He landed a loop, aFunnel, almost a Shaka. Verschooten had problems with the conditions and hardly landed good tricks. Endro Finies from Bonaire fought hard against the German Adrian Beholz, who already did a lot of competitions in 2010. Finies started off well, but Beholz somehow finished stronger landing a perfect Eslider. The German made it through to the top 32. 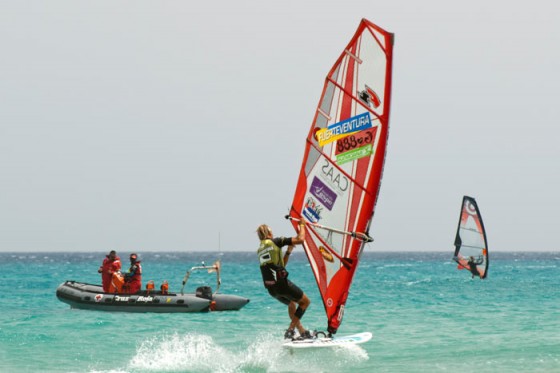 Adrian Beholz on a switch Chacho in his heat (Pic: Kerstin Reiger). 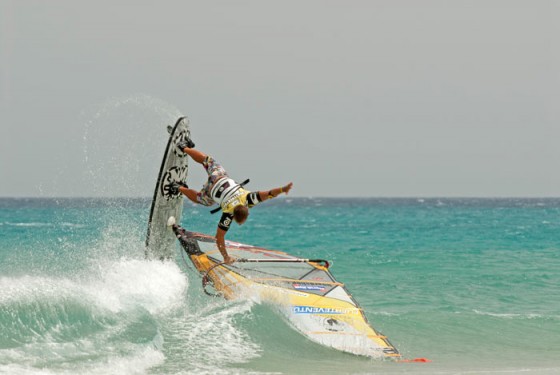 In heat 3 Andy “Bubble” Chambers impressed with a firework of advanced freestyle moves. He was on a 4,9 m sail and landed a Flaka, a Shaka, a fully planned switch Chacho, a SPock. Adam Sims, well know from great webclips, had no chance against his fellow countryman. Andy, who already sailed great at the this year´s EFPT event at Vassiliki, was on fire this afternoon. Mattia Fabrizi from Italy, who won the this years Shaka Bump&Jump event at Lake Garda, had no opponent in his heat. Portier crashed a day ago and could not start. Mattia tried a lot of difficult tricks, but also crashed a lot. The 19 year young Italian definitely is a big talent. 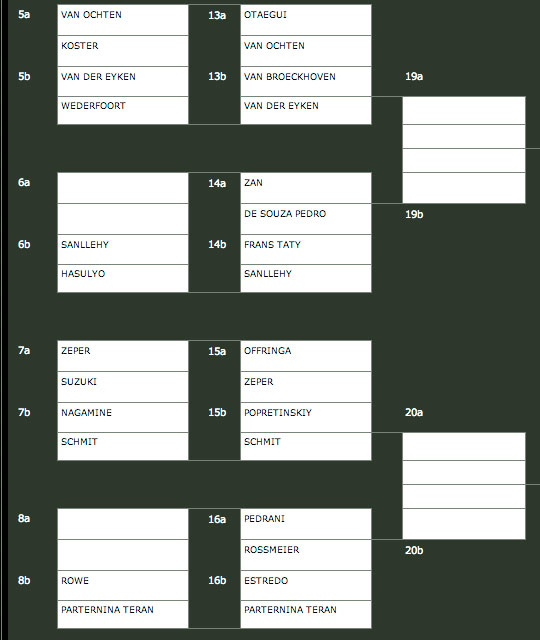 Heats 4-6 in the first single elimination at Sotavento 2010 (Source: pwaworldtour.com).

Heat 4 saw Maarten van Ochten, the current number 5 in the PWA freestyle worldranking against German wavesailing giant Philip Köster, who just had won the Wave-Freestyle event at Sylt a week ago. He also sits in second position in teh waveranking. Van Ochten kept the nerves and sailed a solid heat packed with switch stance tricks and newschool elements. Köster had a lot of great moveattempts with very high difficulty, but crashed a lot. Nevertheless he performed excellent in his first PWA Freestyle heat. He planned through forward loops and Flakas. But Maarten was an incredible strong sailing opponent. Many other riders would have had a very hard time and the Vargas local will be back in the double for sure. 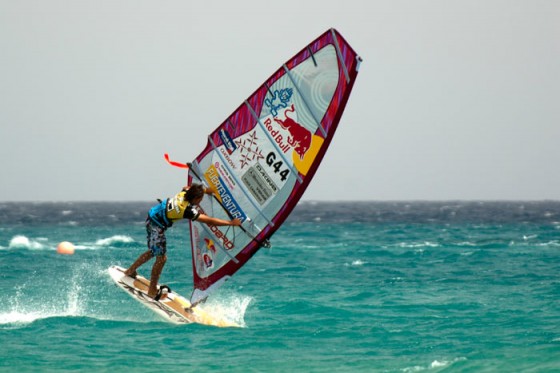 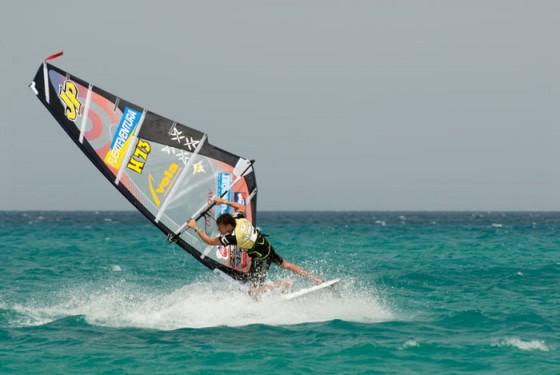 Dieter van der Eyken faced Victor Weederfoort from Curacao in the first round. Dieter had not his best heat, but nailed a perfect Shaka on the way out. Victor had some troubles with the very difficult conditions.

Heat 5 was a big highlight. 15 year old Youp Schmit from Bonaire, the youngest competitor, landed a big Shaka, several switch stance moves like switch Chacho, Puneta or switch Kono, a Flaka, a Shove it. He definitely entertained the crowd on the beach most while this first round. His opponent Nagamine from Japan had no chance at all. Paul Zeper crashed a lot his moves, but landed more than his Japanese opponent Suzuki. He advanced in the top 32 fleet. 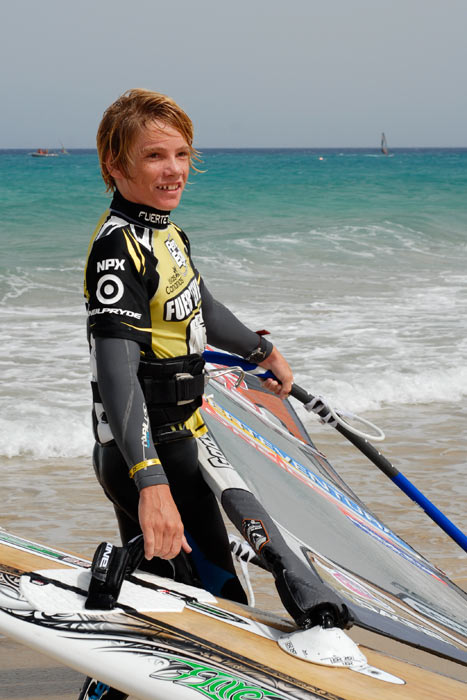 15 year old Youp Schmit back on the beach after his greta heat (Pic: Kerstin Reiger)

In the last heat of the day, heat 6, Eric Sanllehy proofed his top skills in Freestyle. Eric opened his heat with a clean and powerful Toad. Young Daniel Hasulyo, it´s his first participation in a PWA freestyle event, had no chance. Max Rowe and Daivis Teran Paternina from Venezuela had a hard fight. Max sailesd a very solid heat packed with difficult moves. Daivis, trainingspartner of Gollito, had very fast and fluid moves and convinced more in the end.

At 16:40 the freestyle competition got finished for day 1 by racedirector Duncan Coombs. The wind was very gusty and quite unsteady. The windforecast for day 2 is not the best, but it should be very windy by the weekend.

We definitely saw young new talents on the water this afternoon. The top 32 are ready now to sail their next heats. All big names are still in the competition.