According to the forecast, we did not think that this would be a good day, but when we woke up yesterday morning, it was already quite windy in Corralejo. The organization went around the North Shore of the island to check where the conditions could be suitable to compete and surprisingly, it was looking very nice at La Caleta once again. Skipper’s meeting was a bit late: at 11:00, but once on-site everyone rushed and was quickly ready to go on the water. The riders decided on the beach on their strategy (which member of the team will sail first, 2nd and so on) and the first heat started at 12:30. 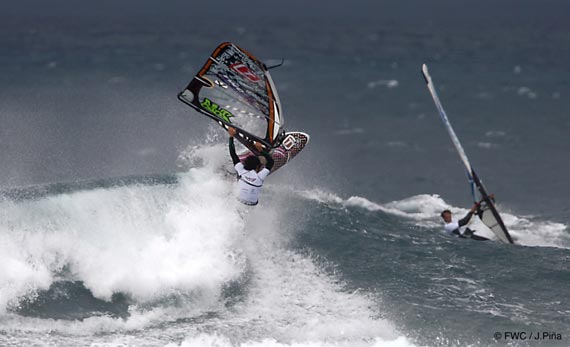 Waves were around 2m hight and wind blowing slightly over 15 knots, the riders, on their bigger equipment, could make nice rollers and aerials. In the 1st heat, JB tried big aerials and a 360 but it was not enough to win the heat against the local Stephane Etienne, who took the biggest waves and won the session. Nayra and Patrick finished 3rd ex aequo. The winner of heat n°2 was a real surprise as Iballa took the victory ahead of Dario and Eleazar, 2nd ex aequo. She was working on the waves until their very end, and landed some perfect aerials in a big set! During heat 3 we saw beautiful moves from Thomas and Fabrice, both pushing hard to do their best. Thomas, always relaxed, finished 1st while Albert and Martin both took the 3rd place. The young Jules sailed very well once again against Jonas but it was not enough to beat the « pro ». In the last heat Ilya was ripping and took the advantage over Musso and his big aerials. Daida handled some good surf too and finished ahead of Nicole.

The riders seemed more into the competition than during the 1st round. On the beach, we could feel a bit more tension and everybody was more concentrated on their own heat. For sure it is a fun event, but still it’s better if you win ; )

Nice pics. Is Jonas ceballos back on Fanatic