The Fuerteventura Wave Classic 2010 is finished. The conditions were not as radical as last year, but the event got a result. This year the event saw as well women competitors, who definitely impressed with good performances. On the last day, the whole crew went to “El Puertito” to give the prizes to the winning team. It was a fast ceremony as most riders had to go to the airport or to the ferry boat. 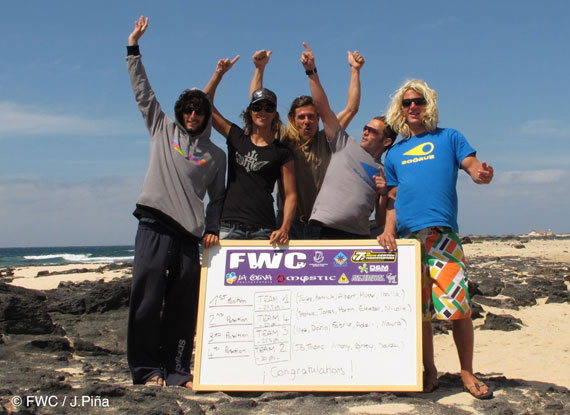 Team 1 is the winning team

Orlando Lavandera, the organizer of the Fuerte Wave Classic event sent us as well some concluding lines about the event.

“The Fuerte Wave Classic 2010 has come to an end. We were lucky again to count with the participation of some of the best windsurfers in the world, who came to enjoy the north shore of Fuerteventura. Overall we sailed in 5 different spots: Punta Blanca, La Caleta, La Entubadera, Bristol and El Cotillo, with conditions from jumping to pure down the line surfing. 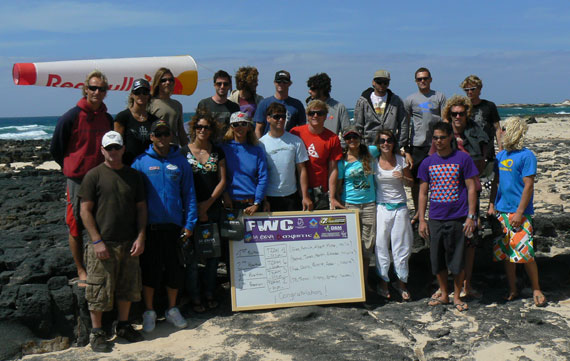 Thanks to the weather conditions of Fuerteventura, our sponsors and the riders, we were able to accomplish the objectives of this event; have a result, sail in different conditions, launch free sessions to show what this sport is all about, have fun in the water, pull impressive moves and get radical images for both the riders and the media.

During the official heats each team could choose who was going to go into the water and in which order, seeing for the first time in windsurfing how team strategies were put into place, depending on wind and wave conditions (and maybe which other rider was in each heat?). In our blog we provided an in depth insight into each riders gear, to give you an idea of what they bring to Fuerte and we were able to have a look at all the new 2010 equipment. On the water we saw jumps, incredible aerials, radical surfs, and much more and during the next weeks we will be putting online several videos of the event for you to enjoy.

Obviously the safety of our riders was paramount and was ensured by a jetski courtesy of RedBull, a rescue team and an ambulance on standby during the event.

Out of the water we saw a great atmosphere between all the riders and it was a fantastic experience to spend this time with them. This year once again we counted on the help of Clean Ocean Project to organise a beach cleaning where we collected 20 cubic meters of rubbish. From the FWC Team we would like to thank our sponsors for their support making this event possible and we look forward to start working to have a FWC11.

Thanks again and see you on the water!”