After the skippersmeeting at 8:30 in the hotel Oasis Duna, where most of the riders stay while the competition days, Orlando Lavandera, the FWC organiser announced: “The racecommitee – Iballa Moreno, Dario Ojeda and Stephane Etienne made an early spotcheck together with myself  and decided that we will try to run an Expression Session at Puertito.”

The whole FWC crew and riders drove to Puertito, which is next to the old little harbour of Cotillo. The plan was to run an expression session at Puertito only and change later the spots to Entubadera. Massive big sets were breaking towards the rocky cliffs and 10 to 15 knots sideshore wind from the right were blowing at the scary spot. Most of the sailors were not sure if they should make it out into the almost double mast high waves in this light wind. One fault could destroy all the equipment within some seconds. 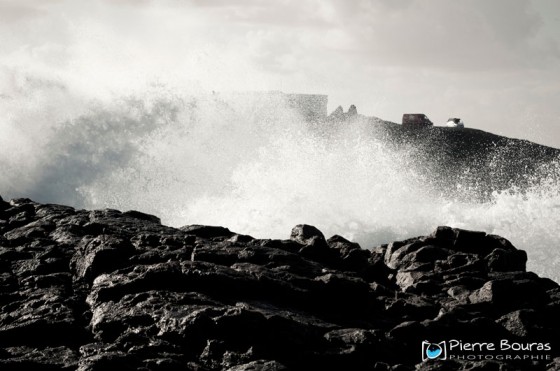 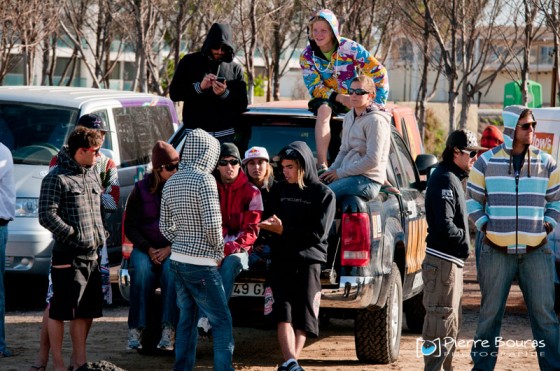 The riders waiting at Puertito

Local Stephane Etienne rigged his 5.0 directly at the spot and tried to make it out jumping in the white waters from the cliffs directly. But he failed and was soon back on the beach.
A few other sailors decided to try to enter the water a bay further northeast of Puertito. Will Ward from the UK, who lives on Fuerteventura was the first to start from there. He also failed and destroyed his Ezzy sail completely. 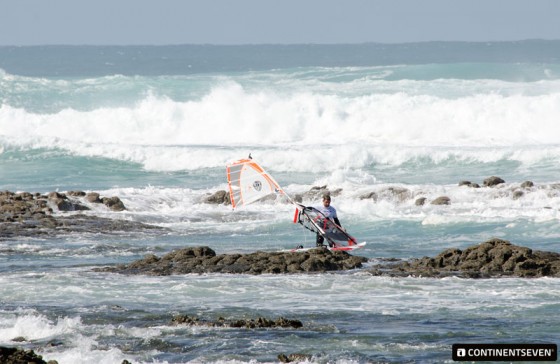 Will Ward coming back

French sailor Yannick Anton, who as well lives on Fuerteventura, was the next one, who tried it and he made it. Out there he made the most impressive wave rides of the whole event so far. with long bottom turns on the double mast high waves, which got bigger and bigger minute by minute. Yannick used a 5.0 m big sail while his session in one of the biggest swells of this winterseaon on Fuerteventura. 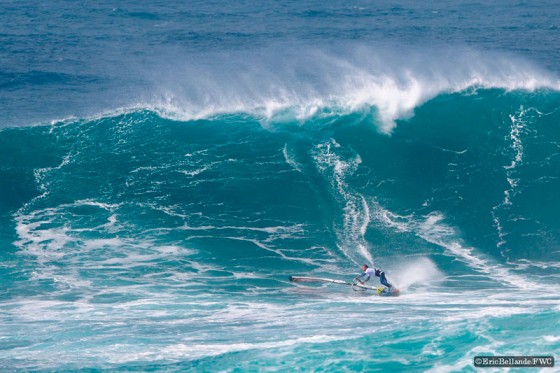 Thomas Traversa also tried to follow his fellow countryman Yannick Anton and had a hard fight for at least 40 minutes before he found a way to make it through the massive white water walls. Once Thomas was out he made the fault to sail too much downwind and not enough out on the open ocean. A huge wave caught him and finished his dreams to get turns done in the double mast high monsters. He made not one single turn in the end, but crashed his rigg completely! Broken mast, broken boom, completely destroyed sail. The jet ski rider, who made a great job at Puertito, saved Thomas and brought him back.

Albert Ferroni, who is relatively unkown in the international windsurfing scene, started at the neighbouring beach of Cotillo and sailed upwind to Puertito. Albert used his old Simmer 5,3 and a custom waveboard. The local, who lives next to Cotillo and who was in the winning team in 2010, convinced with impressive waveselection and nice big waveriding style. In the end of his session- he were looking for a really big final ride – a monster set surprised Albert. He could not get enough speed and the monster caught him from the back. Luckily the jetski rider was still on the water, picked him up and brought him back into the old harbour of Cotillo. He lost all his gear and had some broken parts in the end. Together with Yannick Anton he was the most impressive sailor of today. 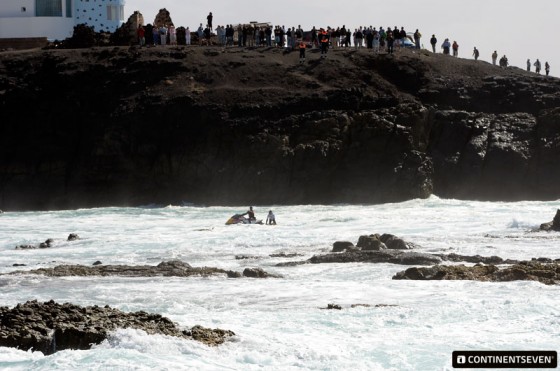 Albert Ferroni on the jetski with a big audience 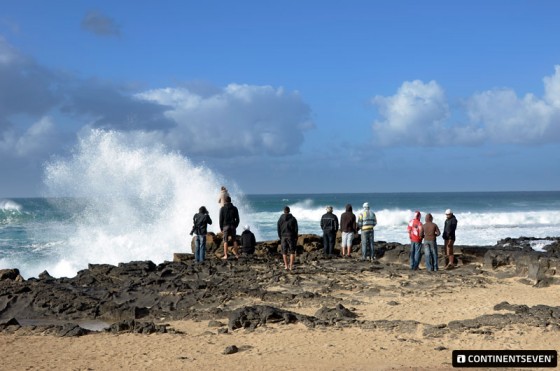 After the big spectacle at Puertito the whole FWC crew and riders drove to the Flag Beach, where a super session at the break of Entubadera got started at 16.00. Relatively steady wind from northern direction blew and many riders could plan. Almost all competitors were out and tried to show their best waveriding. We saw very good action from Daida Moreno, Nayra Alonso, Aleix Sanllehy, Alex Mussolinei, Dario Ojeda and Björn Dunkerbeck. Several riders broke their masts like Mikey Clancy, Shannon Bohny or Eleazar Alonso. 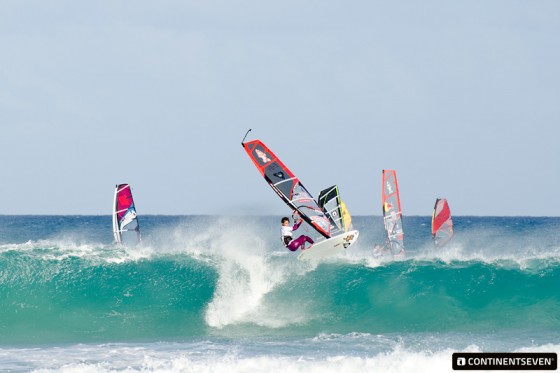 Yann is the best wave rider i’ve ever seen!!!

[…] This post was mentioned on Twitter by gary lawton and Continentseven, lola noo. lola noo said: Fuerte Wave Classic 2011 – Day 5: At the moment the FWC crew and riders are at Puertito. http://bit.ly/fTIibY […]