Dieter van der Eyken’s season previews were always pretty right in the past. So, we thought to hook up again with the Belgian freestyle windsurfer to ask, who will be the Freestyle World Champion 2015. This winter Dieter travelled a lot, he was in Western Australia, Tenerife and Bonaire and met a lot of pro riders, so he knows what is going on in the international freestyle scene. 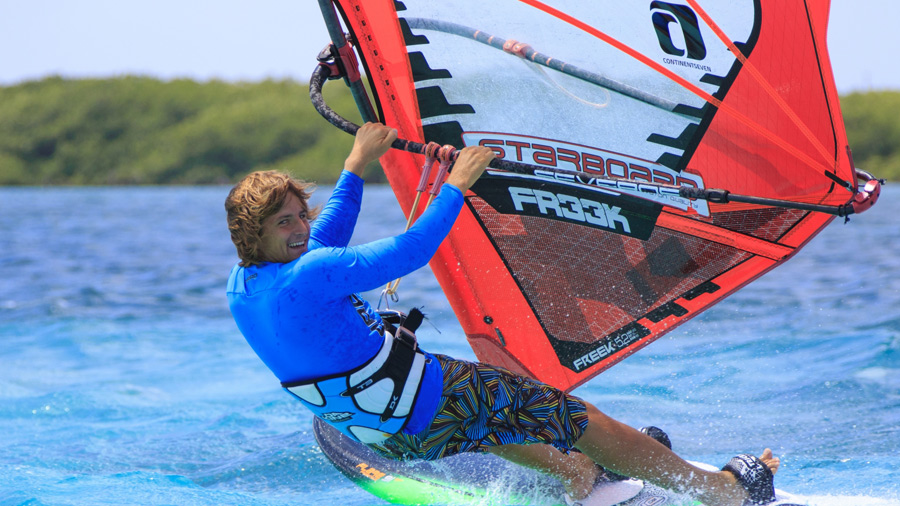 Continentseven: How was your winter?
Dieter van der Eyken: Hello C7, my winter was pretty good. Last year was better, but I can’t complain. In both my trips to Western Australia I scored good wind and especially some good waves as well. Besides that I also had a week in Tenerife with my parents, where I windsurfed almost every day and in Bonaire I had a great first 2,5 weeks before the wind dropped. I did have better wave sailing days than freestyle days so probably will plan a longer trip to Bonaire again next year.

Continentseven: How is the current level in freestyle windsurfing?
Dieter van der Eyken: High! The level did improve again compared to 2014, but a bit less than last year as the season seemed to have started later in the Caribbean. But what I did notice is that everyone got even more consistent in their double air moves compared to last year and power moves on both sides. I’m pretty sure we will see some more air moves compared to last year and who knows maybe the first double air rotations (besides the Pasko) will be landed this year on flat water. Who has imagined that 4 years ago? 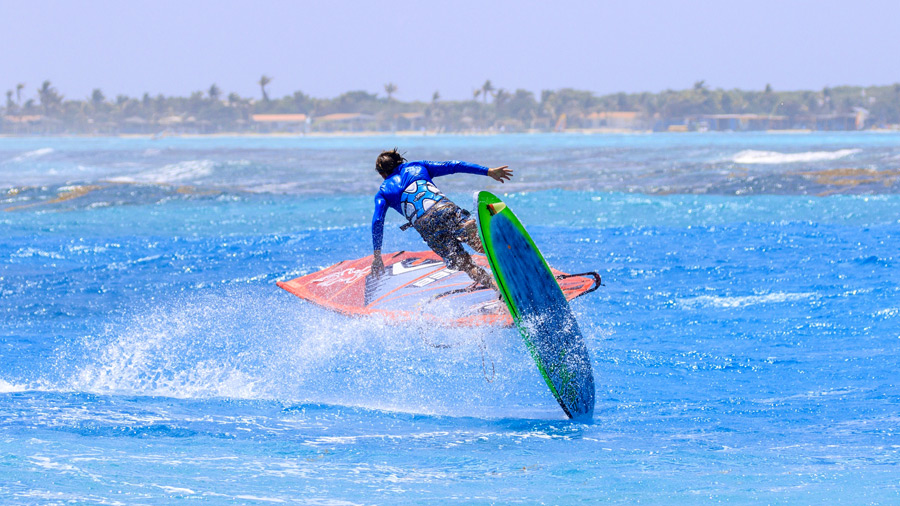 Dieter with a no handed Burner (Pic: Markus Seidel)

Continentseven: Which moves will we see in a heat with ideal freestyle conditions?
Dieter van der Eyken: If it’s dead flat water and 30 knots of wind we can see moves like Airkabi into Culo, Air Funnell into Burner no-handed, Spock Double Culo, Air Skopu into Burner and many more of the combination power moves. The thing that will make you stand out this year is to create kind of your own style even more than the years before and by being different than the other guys. Everyone has the power moves, all of them consistent enough now and pretty much everyone in the top 20 can jump a double power move, if the conditions are good.

Continentseven: Which moves have the highest difficulty in 2015?
Dieter van der Eyken: Combination of air moves like Airskopu into Burner, double Airbob , Airkabi into Culo and pretty much any power move combination you can think of on flat water. When there are waves involved it will be moves like double Pasko, Air Chachos and other jumping moves that will make the difference for the judges. That’s why I think the second part of the year (Fuerteventura and Sylt) can give totally different results than the beginning at Leucate and Podersdorf, what will make it really interesting this season.

Continentseven: 2014 saw a few discussions about the judging and the freestylers have been working on a new scoring system. How does this new system look like?
Dieter van der Eyken: Not much has been revealed on the new scoring system yet as it’s not fully up to date yet and it still has to be tested. It will basically give us points for every move we do just like in the wave discipline and calculate a heat result live for the public. It will still be based on technical difficulty, style and diversity just like it is now, but the technical difficulty and style will be higher awarded than the diversity. But it’s important that diversity still stays in it especially for the women’s fleet. The guy or girl, who will show the best combos of different kind of moves should still win in this system. However, if you will execute moves only out of the highest category, you will still get the maximum diversity points and you will still be able to get a perfect score. 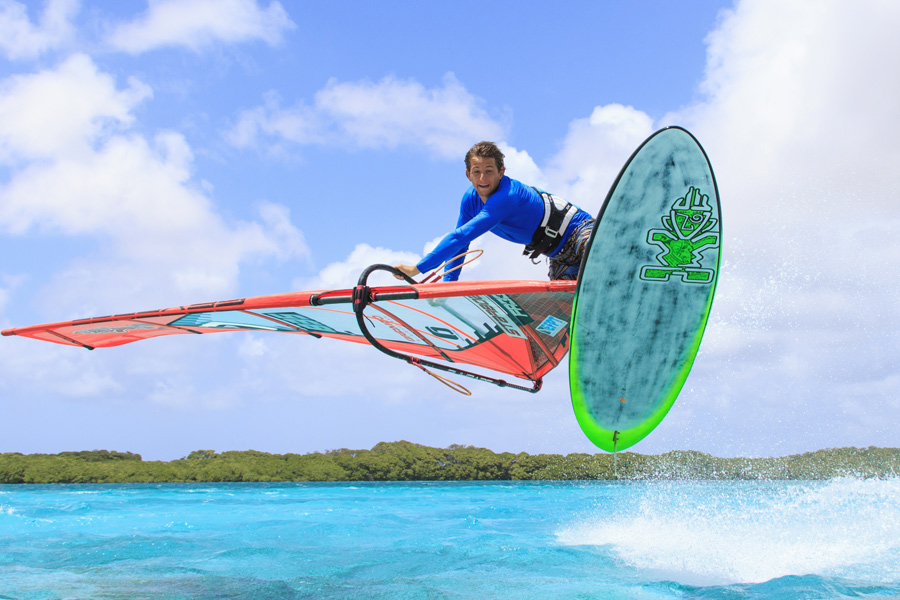 Dieter with a Shaka in the Lac Bay (Pic: Markus Seidel)

Continentseven: There is the rule, that a freestyle heat shall be considered valid, if 1 average sized sailor in the heat is able to sufficiently attempt the required number of moves with a sail of 5.2 m. Will that force riders to use bigger gear in 2015 than in 2014?
Dieter van der Eyken: I don’t think this rule will see a massive difference for most riders. A lot of guys already sail with 5.2m most of the lighter wind days and some even have sizes like 5.4m and 5.6m in their quiver. It’s more to make an official rule that everyone knows it ahead of time and should be prepared to have at least a 5.2m in the bag, even at spots like Fuerteventura in case the wind gets light. My personal biggest combo I use is the Flare 101 and Freek 5.2m. I still have a 5.6m just in case, but I don’t think I will be using it as I’m planing as fast as most other riders on my 5.2m.

Continentseven: In the last years you were always pretty right with your predictions about the freestyle ranking. Which names will we see on the freestyle podiums this year?
Dieter van der Eyken: I know I was pretty good at this in the past years, but it does get harder every year. However I will give it a try again as I have been thinking over this quite a bit. In the women category it’s not really fair as they just have one event in not really perfect freestyle conditions, what will show a different result as you would put them on a place like Bonaire. Hopefully this will change in the future because last year the action in Bonaire was really nice to watch!

1. Steven Van Broeckhoven
2. Kiri Thode (I think Steven and Kiri have the highest chance to win the title. It will just depend on places like Fuerteventura and Leucate, where the wind can be really strong and Steven should perform a bit better than Kiri, what’s the reason I put him on 1st place)
3. Amado Vrieswijk (was close last year already and now with a higher ranking (better seeding) he should be able to get on the podium)
4. Gollito Estredo
5. Tonky Frans (anyone who was in the top 10 last year can take this spot, but Tonky defeated Gollito in the past quite a few times and pretty much made Gollito losing his title in 2013 by beating him in the last 2 events in the semi finals, now he can do it in the quarter final and make the difference with the rest of the top 10)

1. Sarah-Quita Offringa (still on another level, but it’s getting closer)
2. Oda Johanna (sailed really good last year and will keep her spot especially when there will be Fuerteventura as the only event)
3. Maaike Huvermann (should get a bit more used to Fuerte, but if it was Bonaire only she would definitely be second. Technically she is the second best women in freestyle in the world in my opinion)
4. Arrianne Aukes (she always did well on Fuerteventura and her injured foot seems to be healed pretty well)
5. Yoli de Brendt or Olya Raskina (Olya got second last year in Fuerte so could even be higher ranked in this list, and Yoli seems to have recovered from her shoulder/arm injury, but might not be able to catch up with the other girls)

Believe it or not, the women ranking for 2015 is harder to predict than the men. It will be really interesting! 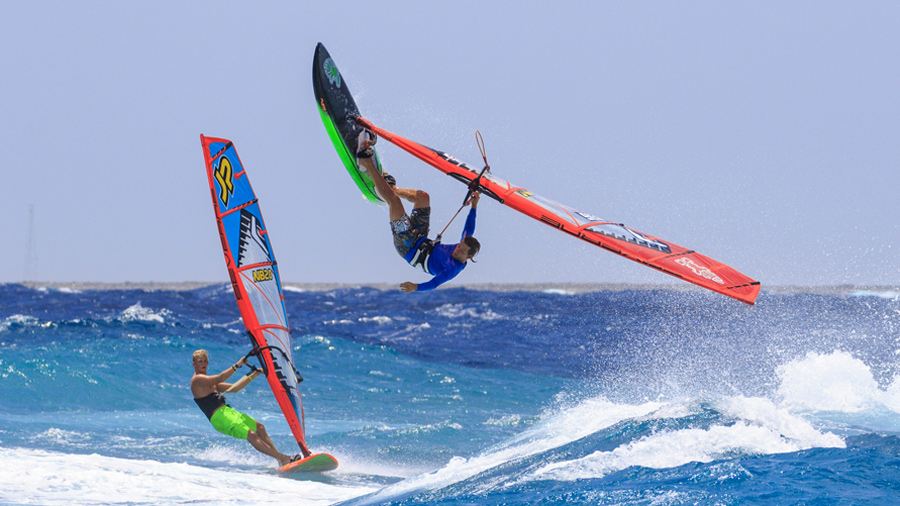 Dieter and Amado in the waves of Bonaire. Amado will be on the podium in 2015, if Dieter is right (Pic: Markus Seidel)

Continentseven: Which moves can we expect from the ladies?
Dieter van der Eyken: They are all sailing really well, Oda is doing her first proper Konos, landed her first Burner, sailed pretty consistent and seems on a mission! Local Maxime van Gent windsurfs a lot better compared to last year. She is much more consistent and just needs to improve on her Starboard tack (right hand front) to really score in Fuerteventura. Arrianne came a bit later, but looks consistent as always. Oda Johanne improved her level in free sailing. I also had a session with Maaike Huvermann at Brouwersdam and she was going pretty high on her switch stance Kono and landed a few nice Skopus, so still a lot of improvement. She landed Shakas already on both tacks. She will be definitely one to watch!! I had a few sessions with Sarah-Quita Offringa in Western Australia and what can I write…. It definitely would be interesting to see her competing with the men. I think she would be able to pass a round or 2. Culo’s, Kono’s, all both tacks, going for her first Paskos and smiling like always! She is still the Queen of freestyle and it will be a joy to watch her again!

Continentseven: Any new hot shots on the radar?
Dieter van der Eyken: Many guys can surprise this year and to be honest I think this could be the most exciting year we had till now. Because with some riders fully recovered from injuries and new talents coming up every heat it will be close from round 1 till the final. Youp Schmit  is back and windsurfing really well. He had to skip the last event last year and he will start with almost no ranking and will guarantee some upsets in the first rounds. He should be able to fight his way back into the top 10, if there are completed double eliminations at each event. Yentel Caers got the chance to train during the winter for the first time. I was watching his last clips online and everyone can see that he raised his level by quite some big steps, definitely top 16 if not top 12 should be possible for him! I actually can fill 2 pages of who will do good this year, but let’s keep it with these 2 to watch out for! In the girl’s group I haven’t seen a new hot shot really besides the fact that their contest will be really fun to watch! 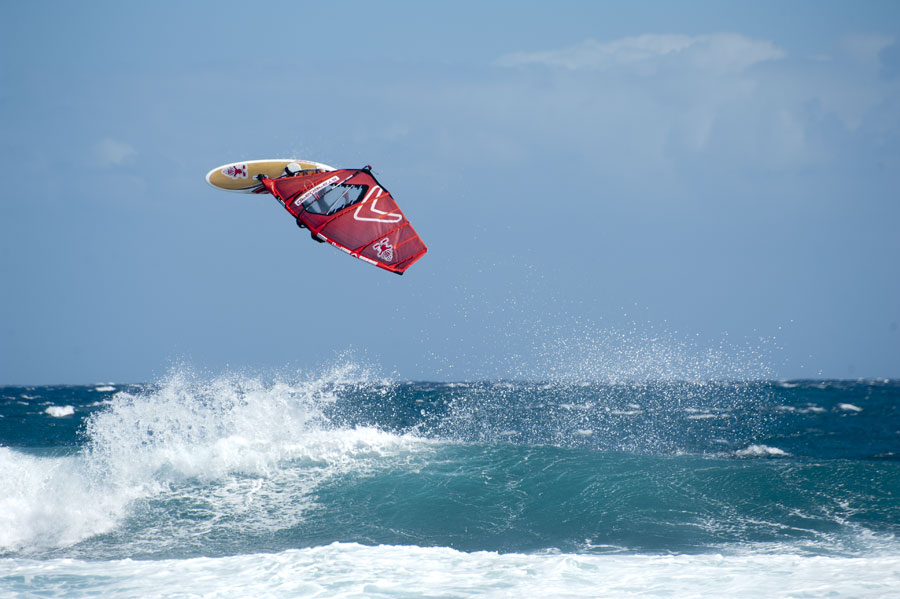 Continentseven: How do you see your chances for 2015?
Dieter van der Eyken: Hhmmm, hard question! I made the decision at the end of last year that I wanted to start in the wave tour as well and trained hard in the waves in Australia to be able to make it through the trials this year. Because of this I windsurfed less freestyle compared to last year what doesn’t mean I’m not ready. I’m not aiming for an overall result, but I just want to sail really good heats again in 2015 and come out of the water after every heat knowing I did my best by sailing the best heat possible. We will see what result it will be in the end. I don’t know now, but I know I want a podium at one of the events for the first time ever in my career and get really stoked about freestyle again! In the wave I want to be able to qualify for all the events and pass a few heats. I’m looking forward to the summer and hope we get some conditions similar to Coronation in Australia!

Continentseven: Who will win the first event, the PWA Mondial du Vent?
Dieter van der Eyken: If it’s Tramontane like I know it with 50 knots of wind Steven Van Broeckhoven will be the man to beat.