Thomas Traversa is one of the creative minds in the windsurfing scene and he is one of the organizers of the Freestyle Project Bonifacio 2013. He works together with Cristelle Baud,  Manager of the Bonifacio Windsurf Center.

The event is an invitational event with two teams competing against each other. “Team France” will be facing “Team World” and some big names are expected to come. There will be a classic competition, but also a video contest and a best move contest with online voting on Continentseven.

The event starts today (3rd until the 8th of June) and we definitely can expect great freestyle action from Piantarella. Watch the cool video teaser below and read a little interview with Christelle Baud, too. 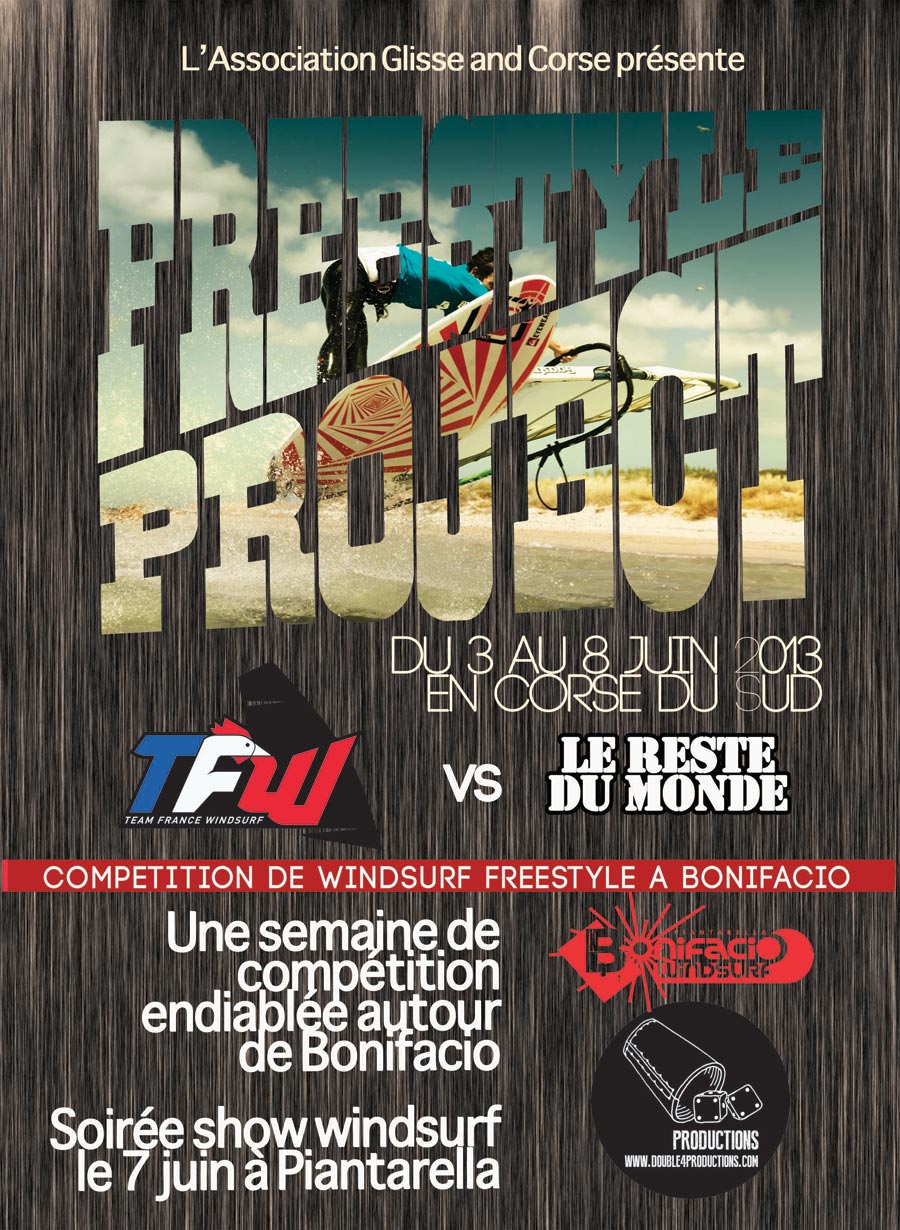 The event poster for the Freestyle Project 2013.

Video teaser for the Bonifacio Freestyle Project, filmed and edited by Pertusato Films

Read an interview with Cristelle Baud,  Manager of the Bonifacio Windsurf Center:

What makes this event different to other freestyle events?

Cristelle Baud: We have always been searching for a competition format that changes the conventional circuit so that competitors feel more relaxed than on the World Tour. We basically concentrate on what’s good for the competitors and what the public likes the most. The formats were always closer to the “game” as a competition. The mission for originality has also been realized with the video team of Pertusatofilms on previous editions. This year it will be the closest event to a classic race format with the “classic individual contest” but  parallel a video team challenge will happen and  the “best move” will be rewarded through an online contest.

Is Corsica the perfect place to host a windsurfing event?

Cristelle Baud: Yes, because the spots are perfect for freestyle and wave! The island is windy, especially in Bonifacio at the southern end of the island and within a radius of 20 km we have several choices of  “flat” conditions (flat water), what’s ideal for the freestylers. Besides the local area there are more locations to practice freestyle and wave rather than slalom. Although there is a small option for those addicted to speed. And in the end freestyle is just so beautiful, so beautiful ….

How is Thomas Traversa involved in this project?

Cristelle Baud: Thomas got used to come regularly in Corsica during the last few years. We had several photo sessions with him in the lagoon. It became clear that we could create an event with a few competitors. So they can enjoy the beauty of the spot and show their talent! Thomas initially participated in the freestyle project as a competitor on the first three editions. Then getting involved with the “Team France Windsurf,” he wished to take part in the organization to help me with  the “sport” part and thus naturally became race director of this future edition.

The event will take place at Piantarella. Please, can you describe the spot a bit.

Cristelle Baud: Some say in the South of the island the cap effect accelerates the wind very well and if the wind is a little light on one side, you can move to get a stronger wind somewhere else. Finally, regarding the images, Piantarella is essential for its color, but after 4 years of videos on the site, there are other spots that are just as deserving of being highlighted. They are less “turquoise”, but they have their charm, and then it also allows us to vary the images. This is what we had done the previous years at the spot Tonnara and it is exactly what we still want to do this year. Remember that in this contest format the best French freestyle sailors will be facing some of the best international freestylers!