The Formula Worldchampionships, which take place from the 21st till the 27th of March 2010, on Lago Potrerillos, Argentina, see already results after two competition days. Martha Hlavaty and Antoine Albeau are in the lead. 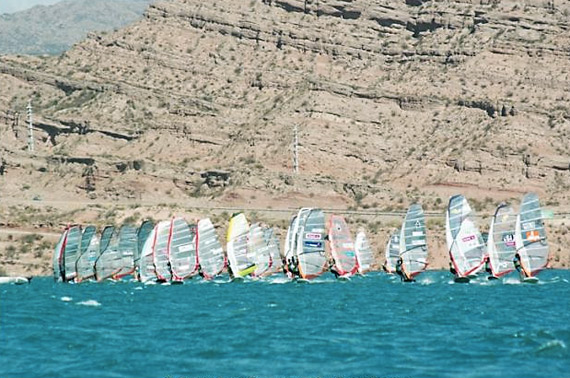 In the ladies class just 7 girls are fighting for the title. Allison Shreeve is missing. Current Formula Worldchampion Martha Hlavaty is dominating in front of the young sailor Morane Demont from Martinique. Martha could win 5 of 6 races on the Lago Potrerillos. Morene took one first place, 4 second and one third.

In the men´s category Steve Allen and Paolo dos Reis had an excellent start on day one, while top star Antoine Albeau just made it on position 6. On day 2, 4 races were sailed, Antoine had an awesome comeback after a three years break in international Formula racing and could win 3 races and scored high with a second. Ross Williams impressed with a very strong performance following Antoine in second position. Paolo had a solid second day and could finish in third. A little surprise is Pawel Hlavaty in 4th position, followed by multiple Formula worldchampion Steve Allen. Some big names like Gabriel Browne, Wojtek Brozozowski, Wilhelm Schurmann or Micah Buzianis  could not make it in the top 10. 9 more rounds are possible. And things can change quick! 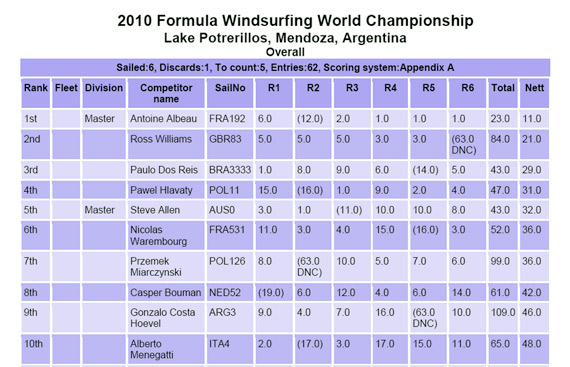 The men result after two days with Antoine Albeau in the lead (Source: formulawindsurfing.org).