On the final day of the 2010 Formula Windsurfing Worldchampionships, which took place on the Lago Potrerillos in the Argentinian Andes 1500 above sea level, the winners were already determined:
Marta Hlavaty and Antoine Albeau. Also the silver medals were clear. Morene Demont and Paolo dos Reis could finish in second position. Morene is a rising star just 16 years old and Paolo the best Formula racer from Brasil in the moment, who has a great form since the beginning of 2010. He could win several competitions this year already!

In the men´s fleet there was a tight fight on for the third position till the last race number 15, which took place on the final day. Several riders had the chance to make it on the podium overall. Casper Bouman could win the final race, but Ross Williams came in second and could defend his third position from the day before. Congratulations Ross! The British windsurfer is for sure one of the best overall professional windsurfers, who can win in Formula, Slalom and finish great in waves. RS:X specialist Casper Bouman followed in 4th and he will be very hungry to make it on the podium very soon. He already could win 4 races out of 15. He definitely surprised with this strong performance in Argentina. Pawel Hlawaty came in 5th and Steve Allen in 6th 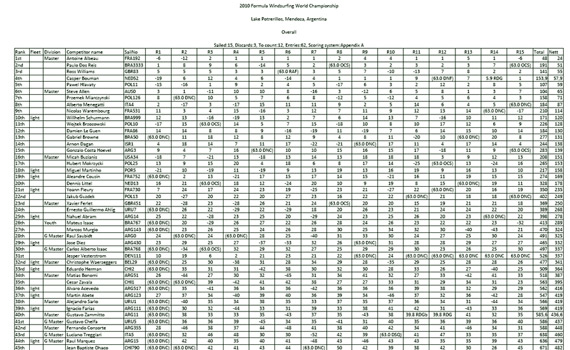