“He is a big strong boy and is capable of beating anyone out there”, says Gaastra team manager Matt Pritchard. Gaastra International are proud to announce that top PWA Slalom Competitor, Finian Maynard has just inked a deal to ride Gaastra sails for the upcoming 2010 season.

And that Finian can beat anyone he just proved this season at several events. We hooked up with Finian to know a bit more about his change and his plans 2010. 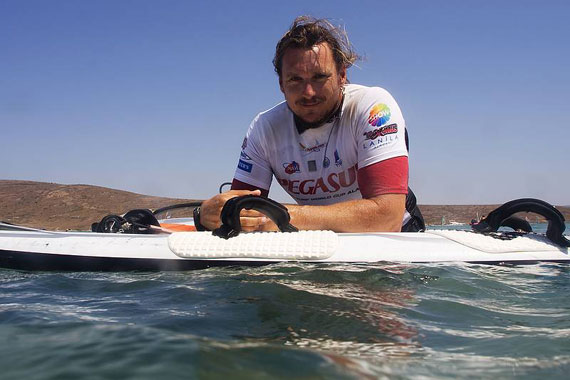 C7: You had an extremely great season in 2009, winning the world title in the speed discipline and placing in 2nd in the PWA Slalom discipline overall. Your setup seemed to work excellent. And now the change to Gaastra! Why?

FM: Firstly I would like to thank Neil Pryde for their support over the years, but it was time for a change. I felt that Gaastra would give me the best chance to go after the PWA slalom title in 2010 and they are hungry for success, so it made sense.

C7: You were not a part of the core test team of NP, but everybody knows that you have a great hand for tuning and testing! Was this also a reason for your change?

FM: Not really. Since we are all on production gear, it is more up to tuning for personal taste anyway in order to make the most out of what each of us has in our arsenal. I was never fussed not to be a part of the testing team at NP, they did a good job, but I think there is an opportunity at Gaastra to get more involved with the development. With RRD, I am 100% involved with the X-Fire development so I am already working constantly on making better products for production already, which I thoroughly enjoy.

C7: Your RRD boards are tested with NP. Are they working with the Gaastra sails just as well?

FM: This was a very important point, clearly, and the matching of the ‘engine’ and ‘chassis’ of the per-say ‘race car’ is fundamentally important before I would change racing sails. In this case, I was pleasantly surprised at how well the new Vapor and my XF boards matched up with the rocker lines that were clearly in unison with the balance of the new rigs. The combination is good.

C7: You are in the same team with Dan Kaseler now. He designed your former world record Naish sails! Plus you are the current speed world champion! Are you motivated to get Gaastra on top in the speed results again.

FM: Yes, I am motivated. My goal is to perform at everything I compete in at the highest level that I am able to deliver, so hopefully that is good enough to win.

C7: There are rumors that the speed channel  in France will be opening again in winter 2010? Will you be part of it and go for the record again?

FM: If the Canal opens again, I would like to be there for the good days, probably not for the so-so days. Frankly, I was out of form for several reasons the last time I sailed in Saintes Maries and was not close at all to my potential, which was personally difficult for me to take. I want to correct that so we’ll see what happens. I still have a strong passion for sailing the tiny boards and small sails, going fast on the Canal is a special feeling, and I would welcome that adrenaline rush again. 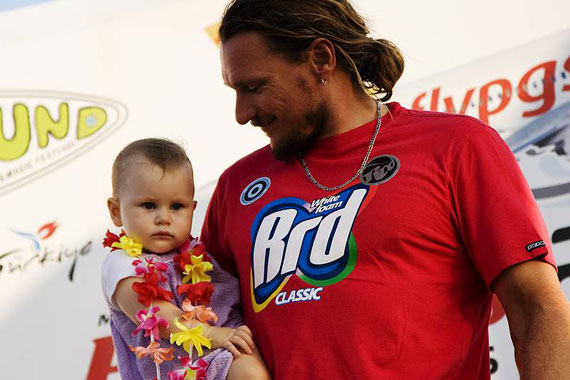 Finian takes his daughter on the podium in Alacati - Pic: PWA/ J. Carter

C7: Your 2009 season was very successful! In Slalom you could put a lot of pressure on Antoine. Just remembering the Alacati competition, where you were the hardest opponent for Antoine. What do you think was the reason for your excellent performance in 2009?

FM: 2009 was the year that I had to prove to myself that I still had what it takes to compete at the highest level because I had two off-seasons in 07/08 for various reasons. I was very motivated during the last winter to focus on a comeback and to make sure the equipment was good for my needs. The RRD boards improved significantly from 08 to 09 and this helped a lot, mainly out of the gybe marks, and I spent a large amount of time tuning my equipment to suit my sailing style. In hindsight however, I still don’t think I sailed that well in 2009, there is room for marked improvement moving forward.

C7: But we know that only the title, the victory counts for you in the end! What has to be changed, that you will stand on top of the podium in the PWA Slalom ranking in the end?

Clearly Antoine Albeau is the man to beat, he is the undisputed world champion. In order to be first, it will take an almost flawless seasonal performance to stand on top of the podium by any of the many good sailors who can win. For me personally, my goal is to limit mistakes and to rely on my natural speed. I am sure that if I can do that, then I will be in there with a shout at the end of the year for the title.

C7: You are in a strong international Gaastra racing team. Ross Williams, Kevin Pritchard, Arnon Dagan, Cedric Bordes. Do you see yourself as the new team leader?

FM: Not at all. I know these guys really well and I would prefer that everybody is on equal ground, that way there is no tension and we can maintain our friendships, which are important to me. You are right in saying that the Gaastra team is strong. In fact, very strong on paper. We’ll have to wait and see what happens out on the water.

C7: Will you train with your teammates in 2010 to prepare for the season? You already trained with Arnon Dagan in 2009 for several weeks on Maui! And how will your winter training look like?

FM: I trained a lot with Arnon and Peter V. this past season. My training plan is not set yet for the new ‘tuning’ season. In mid-January, I go with my family to the BVI to visit my mother/step-father and after this I will make my plan. I won’t be going to Maui next spring. I will train in Europe, but the location is unsure right now. I am sure I will sail with my new team-mates to tune up at some point.

C7: Are you scared that you will not be as fast on the Gaastra sails as you were on the Neilpryde sails? The sizes are different and maybe do not fit to your style of sailing?

C7: Did you already decide which six sizes you will register for the PWA tour?

FM: I will first thoroughly test everything and then make my decision. 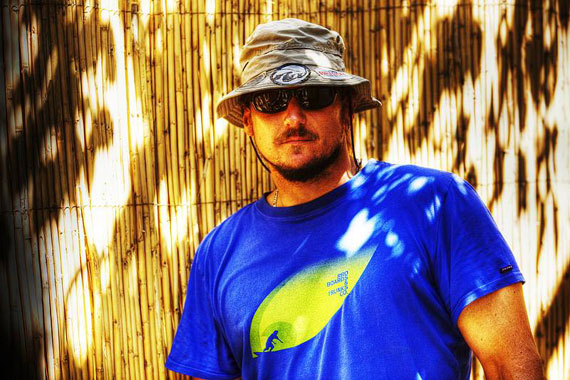 C7: A technical question about the Vapor sails. How will the clew construction look like? Will the clew eyelet sit further inside like we saw on the prototype in Sylt already? And what change will this bring?

FM: The way the new clew has been designed is very clever from Dan taking into account negative outhaul settings. It is inset into the sail enabling a shorter boom whilst allowing the aspect ratio to be more compact. This allows for better acceleration and a lighter back-end during gybes and pumping. There is also the first of having essentially two leech tension straps, one at the traditional placing at the tack, and now one just below the clew. I think that this will be superb in terms of tuning the outside sail tensions to suit the conditions on hand, which can make big differences in the performance of the rigs.

C7: The PWA calendar 2010 is not fixed and nobody knows, if there will dominate the light-, medium- or strongwind events! Makes this fact the decision about training more difficult?

FM: My plan is to be ready from 7-knots to 45-knots, to be on form for anything, so it makes no difference in my training. I will look to arrange my sailing in order to get the winds I need to be prepared for everything.

C7: Gaastra has a Formula board, which seems to work well and you were a lot in the Formula circus some years ago. RRD, your main sponsor, has no Formula board in the range. Even so, are  you interested to start in Formula as well or start a Formula development project with RRD?

FM: At the moment, I have no plans to go Formula sailing but one never knows what the future holds. I started racing with longboards in upwind style courses so I have always loved this type of sailing, but for the moment my focus is on slalom and speed.

C7: What are your minimum goals for 2010 and what does Gaastra expect from you?

Gaastra expects high performances, as does RRD. It is hard to put a number or specific ranking on those goals but basically, I am in it to win it, so I will do my best to try and realize this dream.

Some facts about Finian Maynard:

[…] chose to do an exclusive interview with Continent Seven that can be seen through the following link.  If you’re looking for a quick overview of Finian’s career check out his profile on […]