Surf  Worldcup Podersdorf 2014 saw the Chiemsee European Tow-in Championship qualification round 2, which got completed in good conditions. Julien Mas made it in first place. Italian Mattia Fabrizi, qualified for the final on Wednesday finishing in 2nd and local hero Max Matissek made it in 3rd.

The winning Tow-In move round 2 by Julien Mas

Day 2 at Podersdorf started with cloudy rainy weather and without any sign of wind! We did some filming with Canadian Phil Soltysiak and the winner of the first tow-in qualification round Adam Sims. Both told us stories about their sessions at Podersdorf. They are both living in Vienna part of the year and often windsurf at Podersdorf. Afterwards Josh Sampiero arrived. He is the former chief editor of the American Windsurfing magazine, lives currently in Austria and visited the event. We spoke with hime about the conditions on the lake and the old times on the windsurfing tour. And at around 4.30 pm the tow-in action started.

Julien Mas was stealing the show today. He showed up with his new pink girls board short and entertained the crowd on the beach. Already in his first tow-in attempt he nailed a perfect Airfunnell into Airfunnell and put himself into first position. It seemed the French Tow-In specialist enjoyed to show his tow-in skills in front of a big crowd. Several hundred people were watching this 2nd qualification round and were pushing local hero Max Matissek over the limits. After crashing his first attempt, the pressure was on.

In his second attempt he landed a double Funnell and qualified for the finals, which will happen on April 30. Mattia Fabrizi was on form, too and convinced the judges and the crowd. He is the first Italian, who has ever made it to a final of a European Tow-In Championship in windsurfing.

For a few riders it was a close battle, but again the double moves, which were executed in a clean way, counted most. Youp Schmit for instance nailed a perfect Culo, but missed the landing. He missed the finals by one point and will not have any chance to make it in as Max Rowe is currently the rider, who has the highest points (41) as a 4th placed rider.

The top 4 riders were within 2.5 points. Julien Mas, who entertained the crowds most performing in his tight pink shorts, had the high score of the day with 40 points for the Airfunnell into Airfunnell. Just a point behind Mattia Fabrizi with a perfect Culo and half a point behind local star Max Matissek with a clean double Funnell.

Julien Mas was on form and had the high score

Max Matissek went for a big one on his second attempt 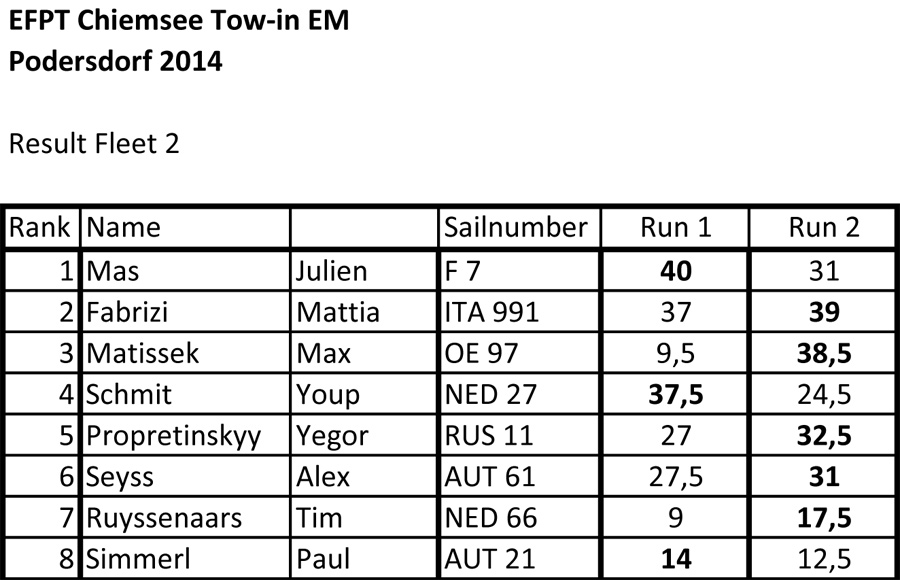 The tow-in results of fleet 2

chris2018-05-22T08:06:04+02:00April 27th, 2014|
Subscribe
0 Comments
Inline Feedbacks
View all comments
This website is using Google Analytics. Please click here if you want to opt-out. Click here to opt-out.
0
0
Would love your thoughts, please comment.x
()
x
| Reply
We use cookies to ensure that we give you the best experience on our website. If you continue to use this site we will assume that you are happy with it.OkNoRead more