Surf Worldcup Podersdorf 2014 saw the first action on the water. The Chiemsee European Tow-in Championship qualification round 1 got completed and Adam Sims from UK made it in first place. Tonky Frans and Amado Vrieswijk qualified as well for the final on Wednesday. 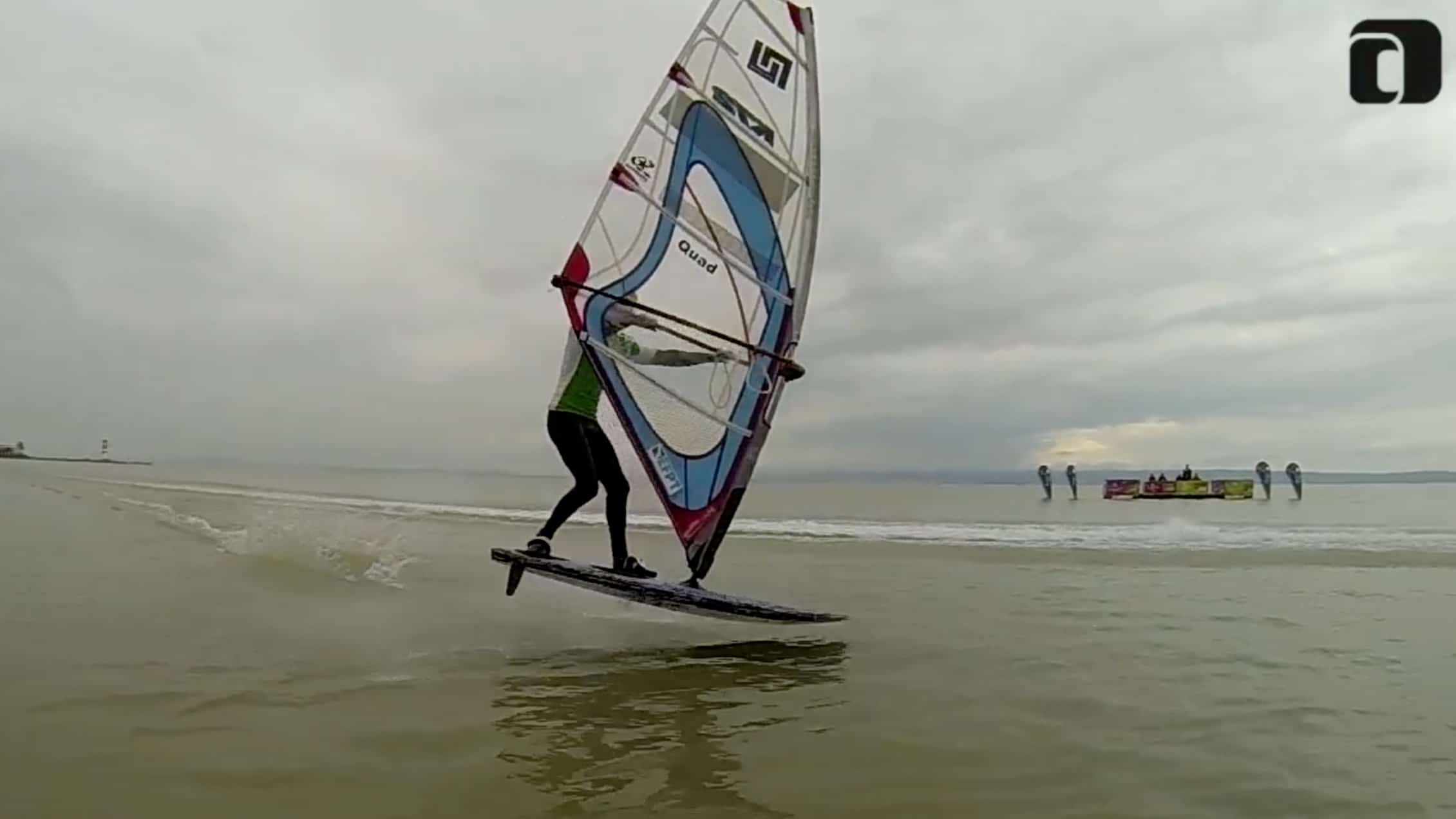 Day 1 at the first EFPT event of the season saw cloudy conditions with light wind and some rain at midday. It is always great to meet the riders after the winter and and listen to their stories from their winter.

Adi Beholz, who came directly from Tarifa told us that he more and more likes to windsurf in waves. “If I am 35 I will surf in huge waves. That would be a dream!” We as well had a chat with Dieter van der Eyken, who just returned from Sardinia, where he ran one of his NGP freestyle windsurfing camps. “The camp was a big success. Meike Huvermann sails incredible. She can duck the sail so perfectly and lands Flakas on both tacks.” And we asked him about his biggest moment during the winter: “Oh man, that was my first perfect frontside wave 360°, which  I landed during my trip in Western Australia.” We as well met Davy Scheffers, who reported about his amazing 5 month long stay on Bonaire: “It was just perfect. Consistent conditions over a long period of time. Let’s hope, that the PWA freestyle event on Bonaire will take place this year!” 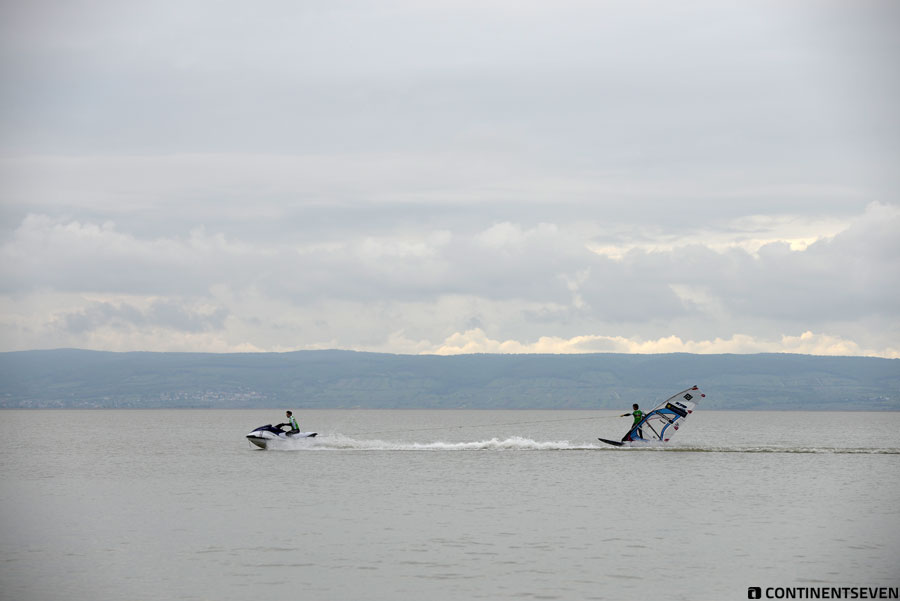 At 5 pm the first tow in qualification round got started. 9 riders were battling it out for the first 3 final places. Each rider had a warm up attempt. Julian Wiemar, Max Rowe, Adam Sims, Yentel Caers, Amado Vrieswijk, Nico Agkazciyan, Tonky Frans, Antoine Albert and Romain Pinocheau.

The jet ski driver made a great job and accelerated all 9 riders to top speed. The light offshore breeze provided perfect perfect tow-in conditions. The UK freestyler Adam Sims impressed probably the most. He is known for crashing pretty hard, but he gained a lot of self-confidence during the winter and landed both of his tow-in moves very clean with a lot of power, spinning around very fast. Adam Sims, who lives part of the year in Austria, knows the waters on Lake Neusiedl very well. He won the qualification round with a clean Funnell into Air Funnel 540 scoring of 46 points out of 60.

Tonky Frans made it in second place. He accelerated lot for his Funnell into Burner and the spectators like his style. He is definitely one of the top stars here at Podersdorf, Lake Neusiedl.

Amado Vrieswijk, got third and qualified for the final, too, but had a hard crash in his first attempt and felt strong pain in his ankle. “One foot went off the strap and that caused the twist on the other ankle. Too bad!” But he gave it all in his second attempt and landed a clean Funnell into Funnell followed by a body pirouette.

We saw great tow-in action. Some of the riders took a lot of risk, but if you want to save a spot in the final you must land at least a double move quite clean or a triple like Adam Sims did. The top riders stepped up again.  For riders with less experience it’s very hard to qualify. Max Rowe and Nico Agkazciyan showed great moves, too but missed some points in the end. There is till one spot available, as 10 riders will qualify for the final, which will be on April 30.

1. Adam Sims with a Funnell into Airfunnell 540

2. Tonky Frans with a Funnell into Burner 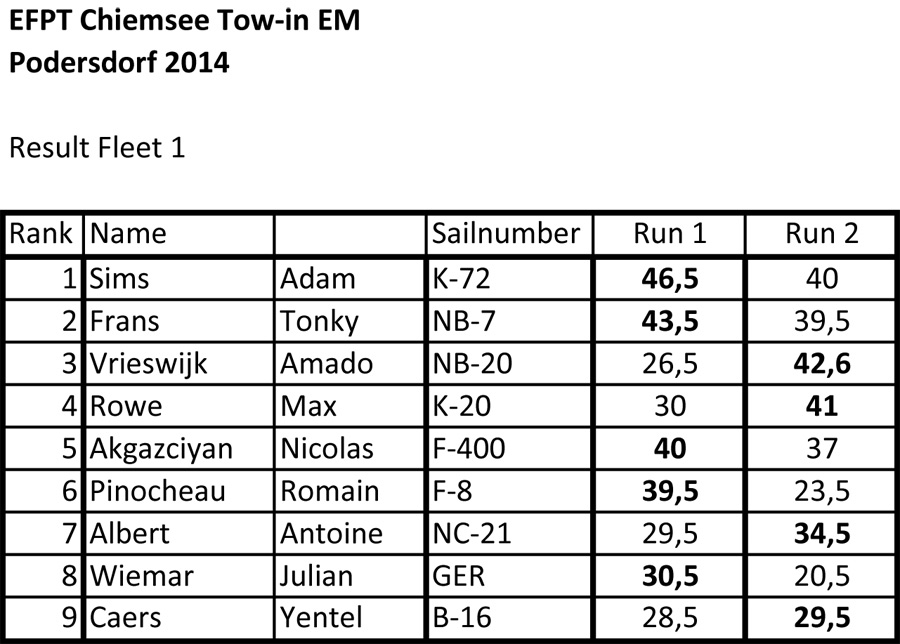