This is the official video of the first Epluchures Wave Contest on January 5, 2014 in Marseille. The event got organized by the Windsurf Marseille Association at the Epluchures beach. It was the first event by this organization. The French Freestyle pros Nicolas Akgazciyan (F-400) and Antony Runes (F-85) made it into the final in Starboard tack onshore conditions. Nicolas won the event. Congrats. He sailed powerful. Antony got second and local Cyril Moussilmani made it in third defeating his brother Sylvain Moussilmani. The wind improved during the competition and got really strong in the afternoon. 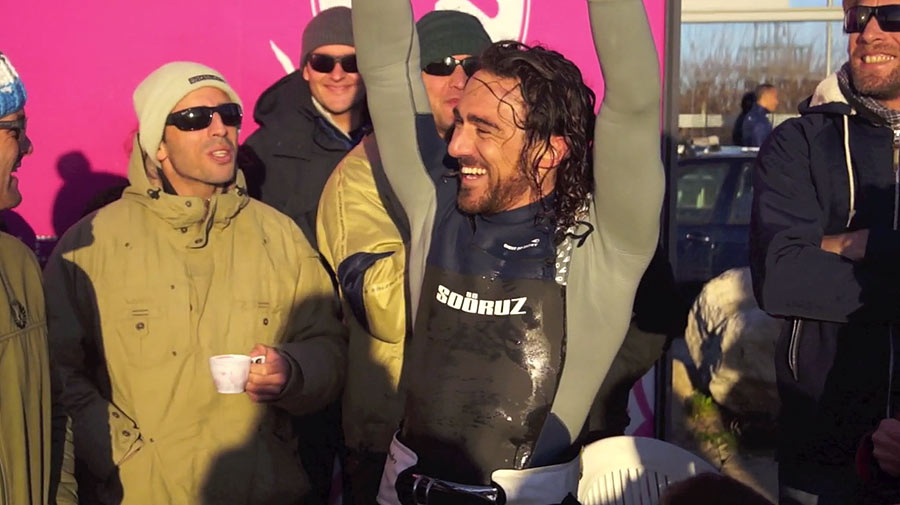 Nicolas celebrates the victory at Marseille.

Nicolas Akgazciyan: “We had wind, waves, friends, hot wine: ingredients for a great event!” stated the organizer “Special thanks to the president Frédéric Marchetti, the judges Patrick Vigouroux and Damien Eymard and all the members of the AWM (Association Windsurf Marseille)!”

“We hope to organize more and more events like this!” was the official message from the organizers after the event.

The video got produced by David Bensussan and Total Riding Production. It’s a 7.44 min long clip, which shows the competition in a natural way.

looks like an amazing shred, great conditions, awesome vibes, that what it is really all about !!! cool, thx guys for the movie ! 🙂