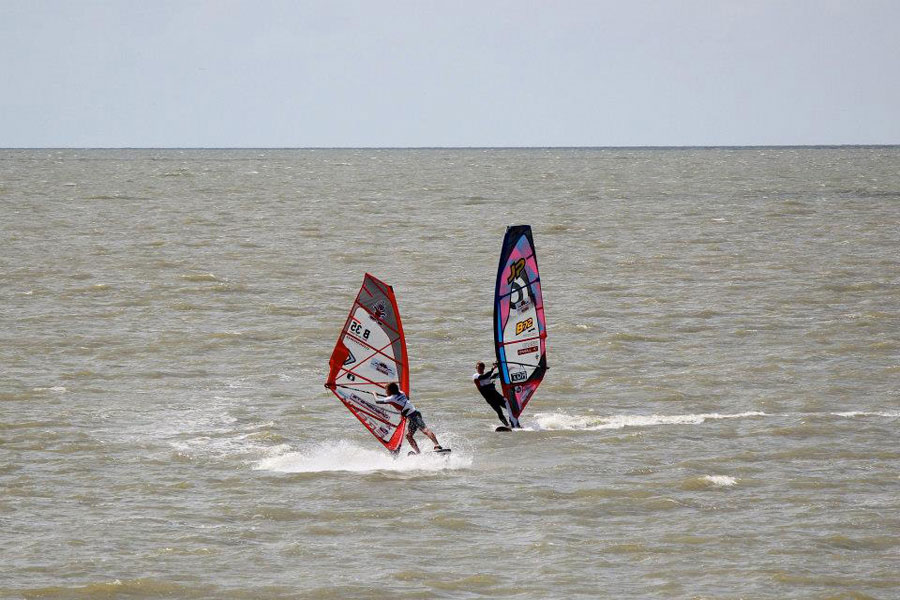 On the last 2 days we finally got some wind in Russia to complete a single and a double elimination. On Friday the forecast wasn’t the best but how happy was I that I brought my 4.4 (which I actually only took for the tow-in) as out of no where there came suddenly wind with about 30 – 35 knts to get everybody going full power in the first round. This was probably the best action of the whole event. By the time the second round started the wind dropped again as fast as it came but everybody knew the wind could come back any second. Most frustrating heat probably was the first heat of the 2nd round, my heat. We resailed it 3 or 4 times (lost the count) with 2 times completing the full 7 minutes before we got a result. Biggest “loser” out of this was Phil Soltysiak who was winning 3 times against Adrian Beholz and lost in the final counting heat when the wind picked up again and the format was switched from overall impression to best trick format with 3 moves counting on each side. For myself it was ok as I won 4 times against Adam Sims and actually could land my first Switch Stance Shaka in the heat. After this the wind got really too light and the competition for Friday was finished.

THE FINAL HEATS OF THE SINGLE ELIMINATION

On Saterday there was an early wake up for the riders who where still in the single elimination as the forecast for the morning looked really promising but the luck was not on our side as the wind dropped even before the skippers meeting was held, which made Tom, the race director release us till 9 to catch some more sleep. At 9 a.m. the waiting game for wind started until around 3 p.m, when the first gusts got strong enough to start planing as Antoine Albert showed by testing the conditions first. Best trick format was chosen and the heat duration was 10 min, to make a competition possible in these conditions. In the top 4 came eventually me, Steven Van Broeckhoven, Adrien Beholz and Max Rowe. In the semi final the level was really high considering the wind conditions but in the end it was Belgium who went to the final. Steven dominated the final as I had my worst heat of the event which made him obviously first, in the loser final it was much closer as Adrien Beholz just could hold off Max Rowe (who landed a deciding Bob just out of the competition area). 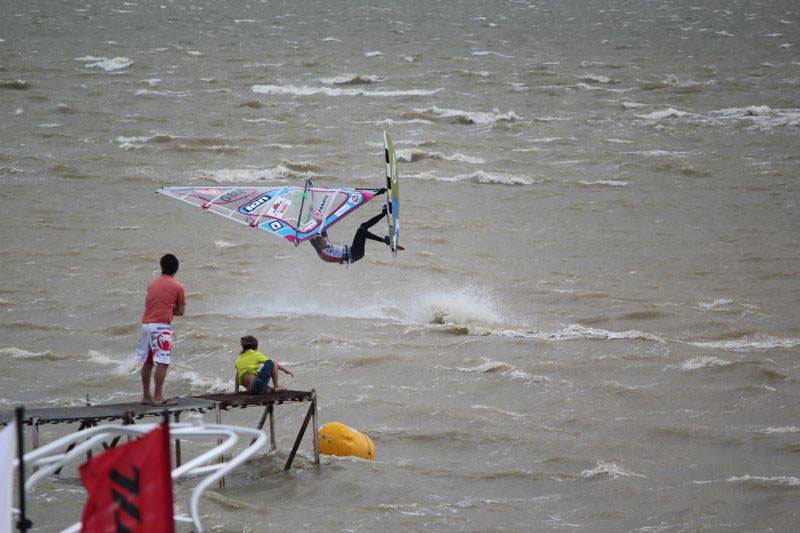 After this the double started in the same format and in the same light wind. Not all riders where too happy with this and the conditions where really tricky with people standing still sometimes 70% of their heat just waiting for gusts to come through to get into planing to do 1 move. So, the conditions where definitely flirting with the limit of sailable competition and the luck factor got bigger than in a normal competition but Tom kept on running as long as everybody could do their 3 moves on each side which made it able to finish a full double elimination in the end of the day.

Best sailors in this double elimination where Yarden Meir who worked himself up to the 7th place with his unique style which impressed the judges a lot, Rick Jendrush who pumped himself into 7th place still showing Culo’s and so on before being stopped by Adam Gavriel, who was on fire and who somehow impressed me the most in this double with showing amazing power moves in this light wind! The only one who could stop him was Phil Soltysiak who was the most adapted to the light wind conditions, although he had a really close heat against Adam Sims. After being almost thrown out by Adam, he managed to climb up the ranks until the 3rd position after 6 or 7 heats in this light wind conditions. He was pumping a lot and  he worked really hard for his 3rd place (after the disappointment in the single), congratz!

THE FINAL
After I stopped Phil, I had to go against Steven again for one more time. The wind was really, really light and I could barely do one power move which was a Culo and I’m one of the lighter guys. But Steven showed that wheight doesn’t matter. On his 5.7 he pumped himself into moves like Burner, Culo and Ponch in not much more than 14 or 15 knts which was really impressive and made him the deserved winner of the first EFPT event in Russia!

Another time big thanks to the organisation and rider Vladimir Yakolev who made this event possible. It was one of the best organized events I’ve ever been to and can’t wait to go back next year!!

Video from the final day. Not visible for German users due to music copyright infringements.