The Croatian slalom windsurfer Enrico Marotti wins the IFCA European Slalom Championship at Bol on the Croatian island on Brac.

Enrico Marotti (European Slalom Champion 2014): “It is a great result for me. Especially after this long winter training, I was waiting for a good result and now I am really motivated to work even harder. I decided to participate here, and not in Alacati, as Croatia is my home country and for my sponsors it was ok, so in the end it was a very good choice. The victory wasn’t easy as a few really good guys came to Croatia. You just make a small mistake and it doesn’t go your way anymore. On the day of the final it was really hard to chose the right equipment. I had 3 sets on the golden horn, close to the start, which gave me an advantage. In the final I took 8,6 but the wind went down just one minute before the start and I was suffering the whole race, but I managed to jibe first at the first mark. I was pumping at all the marks like crazy, because it was really, really light wind. I was ready for another race, but unfortunately the conditions were not good enough to finish more races. But I am really happy.” 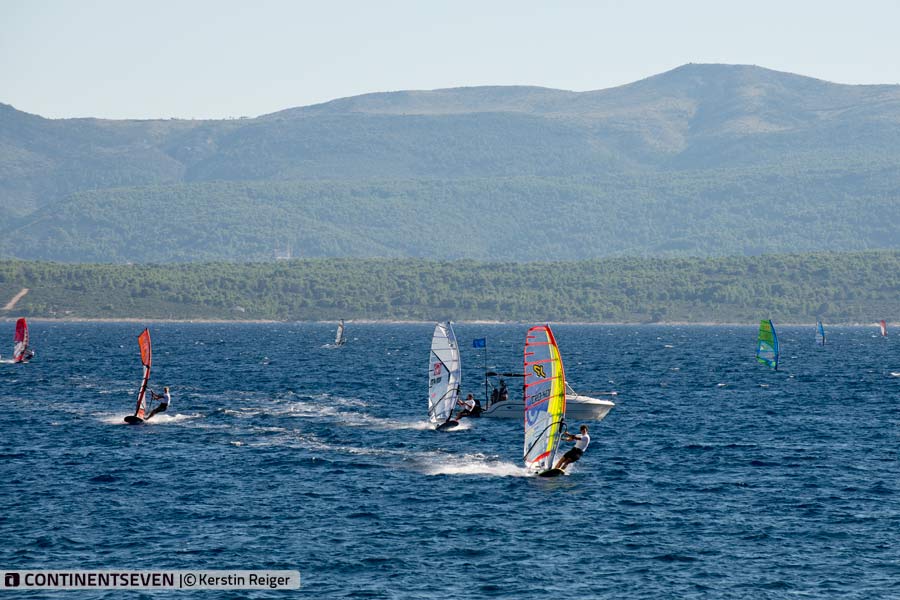 Andrea Vanhoorne (European Slalom Champion Women): “I am really happy. The race did not start well, as I broke a mast in the first heat, but I won all the other races. Unfortunately the wind wasn’t strong enough during the whole event period and we were not able to do many eliminations, but being on the water was really nice. This year is the first year I compete in the women’s class (last year I got 3rd in the juniors). Now I am feeling really comfortable and I am ready for PWA competitions and I want to take part in La Torche.”

Toni Bulic (Organizer, Zoo Station): “We got a result, this was important. The wind wasn’t so great, we had only 2 out of 4 days of wind, but we did some 47 starts. But basically, I am satisfied and we got a European Champion, that was the goal. I hope somebody will see that the European Windsurfing Champion comes from Croatia and will support the sport, because I think Croatia is a fantastic location and the politicians still need to see that.”

Andrea Ferin (Vice European Slalom Champion): “I decided to come to Croatia, because I thought to have a good chance to make it on the podium. I was really focused and now I am really happy. the wind was quite light, but in the end enough for racing. Unfortunately not a lot of eliminations, but I am happy. The level of the top guys was really similar and we had to fight a lot. There were around 10 people, who were able to win the final, but it is nice, when it is like this. The place is really. The only problem was, that we did not have a lot of space and maybe it would be better to move the event area to the golden horn, but it is difficult to get the permissions.”

James Dinsmore (European Slalom Champion Masters): “We’ve all enjoyed coming here and it has been great to come as part of a quite big British team with 6 of us in it. I really enjoyed the team environment. We have really enjoyed the welcome we’ve had, the Croatians have been really friendly. It has been a very friendly event, that is the number one thing. On the water, we have kind of had 1,5 good afternoons of racing, although the racing was good when we were racing, but it was mainly on 9,5m sails and big boards. There were some great sailors out there, I love sailing with likes of yourself, Chris, so it was exciting close racing and I think it would have been great, if we could have done 3 or 4 eliminations, to really truly workout whose the best person out there. To be honest, it was very light in the final, very, very light indeed and going down the first leg I didn’t feel powered up, but some of the previous races I had power in my sail and I was flying, but this final was very light and I was trying the most out of these very difficult conditions, pumping a lot out of the jibes. I feel I could have done maybe a bit better, if there had been a bit more wind, but I am kind of happy. I know the conditions weren’t perfect, but I was happy enough to be out there racing. I can remember sailing against Enrico Marotti in 2010 in Brazil in the IFCA World then and he beat me by one place then and he’s got bigger and better since then, but I am really pleased for him and for Croatia they got a Croatian winner.”

Jan Kosmina (European Slalom Champion Youth): “The wind was really light and I was most of the time on my big gear, on my 8,6m sail and 110l board. In the final and I wanted to take a bit of risk and took the 7,8m sail and 107l board and in the end it was a really good combination, because on the first reach I had really good speed. I was racing good, I did good start, good jibes and had good speed and at the end I was first. I was here for 20 days, then I went home for a few days and came back. My biggest opponent was Coen Swijenburg. He is really good and we have been fighting for the top spots at the big events for many years.”

Slalom Windsurfing in the channel between Brac and Hvar

Enrico Marotti in front of a beautiful backdrop

Enrico Marotti wins in his homecountry