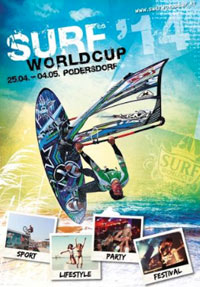 We are approaching the first international freestyle event of this season with dramatic progress. The European Freestyle Pro Tour will be staged at the famous Surf World Cup in Podersdorf, Austria with a total of 26.000€ prize-money from the 25th through to the 30th April 2014.

With just 18 days to go to go the EFPT management released the top 32 fleet today.

“The EFPT tour management announced the 32 riders, which will compete at Podersdorf in the EFPT event. 28 riders of this list got a fixed starting place. For the last four available places wildcards wildcards were distributed as follows: one by the organizer, two by the EFPT and one by us.”

39 riders registered for the first big freestyle event of the season, but just 32 riders made it into the event, which will be started on April 24th. We had several wildcard applications through continentseven. The continentseven wildcard winner for the 2014 EFPT Surf Worldcup in Podersdorf is German freestyle talent Julian Wiemar (G-2111), who will be the youngest competitor in the fleet. We congratulate Julian and wish him best success and fun in his first big international event in Austria.

Who is missing? Current freestyle world champion Kiri Thode, five times freestyle world champion Gollito Estredo, 2010 Podersdorf winner Taty Frans and French freestyler Antony Ruenes are not on the entry list yet. The number 2, 3,8 and 10 of the seeding list will not compete in EFPT. Adam Gavriel from Israel, number 17 on the seeding list and Björn Saragoza from Bonaire, ranked number 20, aren’t registered as well. As well not registered riders from the seeding list are Andy “Bubble” Chambers, who is competing on international level for 9 years, Andraz Zan, active film maker from Slovenia, Olivier Guezo and Alexey Karachevtsev.

Currently there are riders from 13 different countries on the entry list. Most registered riders are from the Netherlands and Germany with 5 starters each, followed by France with 4 and Belgium and Russia with 3 each.

Each rider, who pre-registered by the 4th of April 2014 was taken into account for the wildcards. On Monday the 7th of April the EFPT announced the full fleet of 32 riders including a waiting list. First rider on the waiting list is the Danish freestyler Rasmus Oegelund. A full waiting list will be released soon.

Once a rider is on the waiting list there is a chance he might slip in, in case a competitor is not showing up to the official registration on site on the 24th of April, 6.00 pm till 8.00 pm. To secure a possible place in the fleet though, the person on the waiting list will have to be present on registration day in Austria. The top eight from this seeding list will also get free accommodation by the organizers. 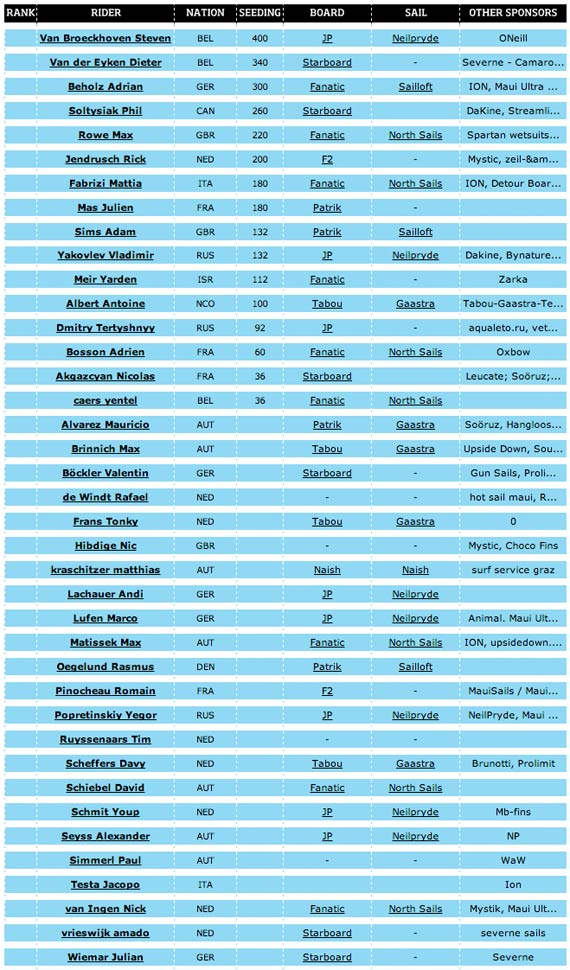 It is the first year that the European Freestyle Pro Tour (EFPT) will run both the freestyle and the Chiemsee tow-in competition. The riders can, but do not have to, compete in both disciplines. It’s also possible just to compete in the tow-in event, which will be held from April 25th till April 27th with qualifying runs and the final on April 30th.

The EFPT will have six possible competition days for the freestyle windsurfing event and four days for the Chiemsee European Tow-In Championship with the final on the 30th of April.