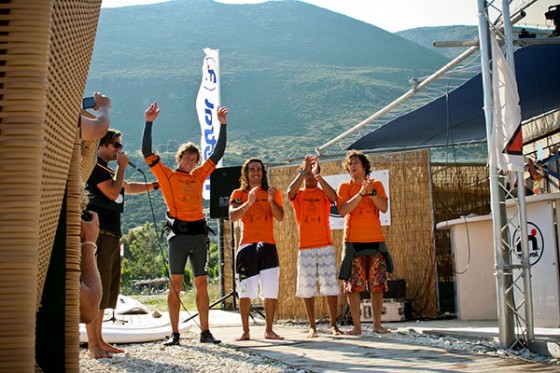 From 9 – 10.30 race director Tom Hartmann registered 23 riders. As on every first official day of an event the expectations for the upcoming days and the memories of the past event on Sardinia were the matter of conversation.

Nicolas Akgazciyan´s (Starboard/Gun Sails), who made a double forward over the Red Bull ramp while the supersession in Sardinia, which brought him a reward of 1.000 €, or Dominik Schönthal (Fanatic/North Sails), who injured himself driving a scooter. And there were also discussions, if Steven van Broeckhoven (F2/Gaastra) will be dominating as before or if the 2nd place in Sardinia in the 3rd double elmination made him nervous a bit! 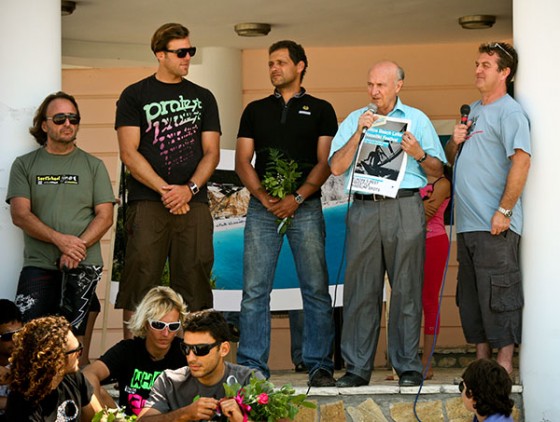 Straight after the registration riders and organisation crew were introduced to the major of Vassiliki in front of the town hall. Riders got roses and a bunch of Greek school kids sang a local song. It was an emotional and warm welcome on the island of Lefkas. The major also found his way to beach, taking a look at the freestyle action and talking to the EFPT riders. Everybody was pretty surprised when he started to talk to Niklas Strahlen (RRD/Simmer Style) in Swedish. The major, together with good looking, mostly English, crowd could see the green flag for the first heat going up at 4pm. 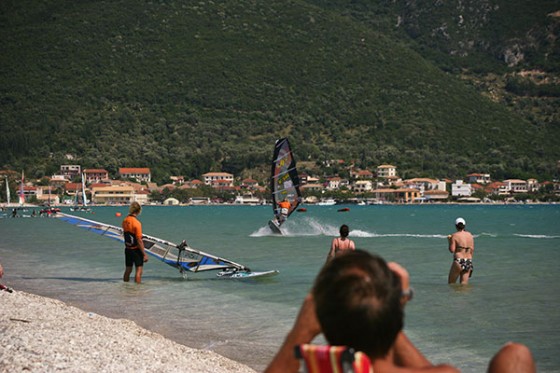 The bay of Vassiliki - Pic: EFPT

The wind kicked in very strong right from the beginning. Most of the riders could rigg their 4.2´s. Already in the first few heats judges had to make a few really tight decisions. Colin Dixon (JP/Neilpryde) succeeded over his mate Andy “Bubble“ Chambers (JP/Neilpryde) with a 2-1 decision and lost his following heat against Niklas Strahlen (RRD/Simmer Style) also 2-1. Nicolas Akgazciyan (Starboard/Gun Sails) sailed a very solid heat and could win over Spanish rider Antxon Otaegui (JP/Neilpryde) in the possibly best heat of the day. Davy Scheffers (Tabou/Gaastra) had bad luck in his heat against Vladimir Yakovlev (JP/Neilpryde). His mastbase was almost broken and therefore the winner from the last double elimination on Sardinia ended up on 9th place. Heat nr. 15 saw Edvan Souza de Pedro (RRD/Simmer Style) against Nicolas Akgazciyan and Yarden Meir (Fanatic/Simmer Style) against Steven van Broeckhoven. Although Edvan sailed a solid heat, it was the French rider Akgazciyan, who took the win and went straight to the final. Steven van Broeckhoven could win over the Israeli Yarden Meir, and so it was Akgazciyan against Van Broeckhoven.

Although the wind was blowing stable throughout the whole race, it started to struggle just seconds before the finals.

The race for third was decided with the horn opening the heat. Yarden Meir chose with a 4,7 a way to small sail and had therefore no chance against Edvan Souza de Pedro.

Steven collected big points with an Air Funnel, while Nico showed everybody what the category “flow“ in the EFPT rules means. With the horn for the red flag the wind stopped completely. It took Steven and Nico quite some time to get back to beach on the glassy water at the inside. At about 6pm the result for the final heats was written down on race director Tom Hartmann´s ladder. Steven van Broeckhoven wins the first single elimination on the Milos Beach Lefkada Vassiliki Festival in front of Nicolas Akgazciyan. 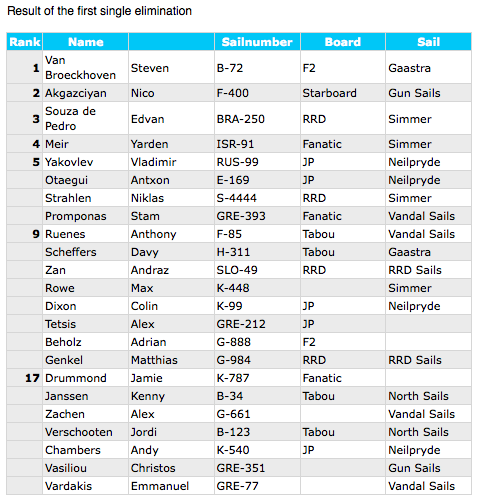 The result of the first single elimination at Vassiliki (source: EFPT).

As the thermal winds on the island Lefkada never show up before 2pm the race organisation set the skippers meeting for tomorrow at 13.00h. You can register under  following link on the live stream tomorrow.