The EFPT crew and all riders drove up to the northwest of the island to compete at the Milos beach, where the water of the Ionian sea is a bit more choppy, but the wind also a bit lighter. Day 3 of the Milos Beach Lefkada Vassiliki Festival was up to be sailed in front of Christos Stratos´ Milos Beach Club. After 2 windy days in Vassiliki the EFPT fleet had some time to relax at the beach.

Early in the morning the whole event, including riders, race crew, fans and the team for the live-stream left the Wildwind Club Vassiliki in direction north, where the Milos Beach Club should become the playground for the European Freestyle Pro Tour. The weather forecast said sunshine and temperatures about 34°C. Usually this is a good sign for the thermal winds of Lefkada, but today there was maybe too much humidity in the air for sailable conditions. Soon after the skippers meeting at 1.00 pm a few riders went on the water with 5.7 m. In the gusts they could, supported by the choppy water, stick a few nice tricks, but on average it was just not enough to start a second single elimination. 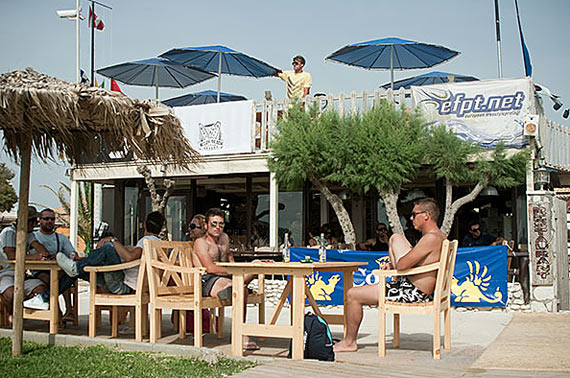 The riders spent their unwanted day off sitting together at the beach, playing around or just relaxing in the sun. Tom Hartmann, the EFPT race director, kept postponing the first possible start, having 7.00 pm as the last possible in his mind. A few minutes before 7.00 p.m., the Corona Girls were already dancing on tables, the wind came back. Antony Ruenes was the first one heading out with 5.2 m. The French could get some good gusts and so the race crew started the second single. The first heat was Adrian Beholz against Jamie Drummond. The blond German and his British opponent pumped hard in their heat, but after 2 minutes extension time the judges still had not enough moves on their papers. At 7.30pm Greek time the race organisation called the competition off. 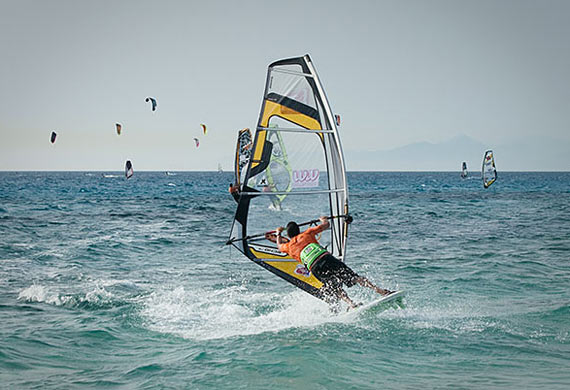 The Skippers meeting for tomorrow is again scheduled at 1.00 pm. The weather forecast looks good for the last day of the Milos Beach Lefkada Vassiliki Festival.