Sarah-Quita Offringa & Jacopo Testa win the 2017 EFPT DAM-X event and are the 2017 European Freestyle Champions. The wind didn’t kick in on the last two days of the event and it wasn’t possible to resume with the final heats of the double elimination. Nevertheless the wind was good during the first two days and everybody had a good time during the event.

The Italian finishes his best season ever with a victory in Brouwersdam. The 25 year-old windsurfer is ranked 3rd in the PWA World Tour and took the European Freestyle Champion title with two event wins and two third places. “Throughtout the whole year, Testa was performing on a level that was off scale and sailed heats that were outstanding in terms of consistency and style. He showed the most remarkable performance at the EFPT Lanzarote this year, going through nine heats in a row to eventually beat eventleader Steven Van Broeckhoven,” EFPT press officer Hanna Poschinger said. 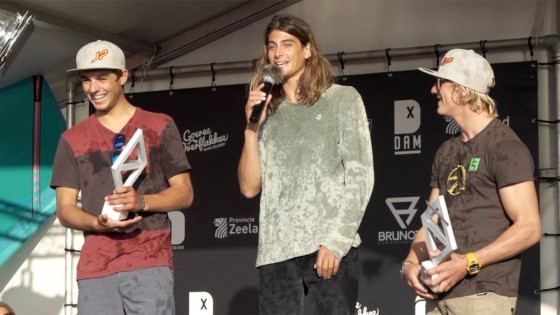 In the ladies 10 times Freestyle World Champion and two times European Champion Sarah-Quita Offringa wins the event and her third European Freestyle Champion title. The wind during the winners final was very light and indeed it was a close heat against Maaike Huvermann. But Sarah-Quita took her 5,1 sail and slided through Esliders, Spock Diablos, Flakas, Shakas or Lollypops. 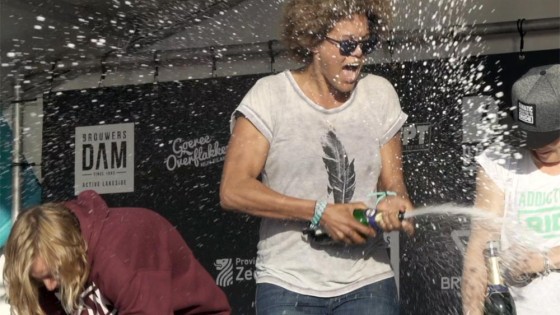 On day 3 the EFPT ran a tow-in competition with 10 riders participating. We saw big moves as the light onshore wind provided perfect conditions for the riders to bust out their moves. In the end it was Amado Vrieswijk, who won with a perfect Culo into Culo. Italian Francesco Cappuzzo landed a Double Culo as well, but not as clean as Aamdo and finished in 2nd and Yentel Caers landed an Air Funnell into Burner and finished in 3rd. 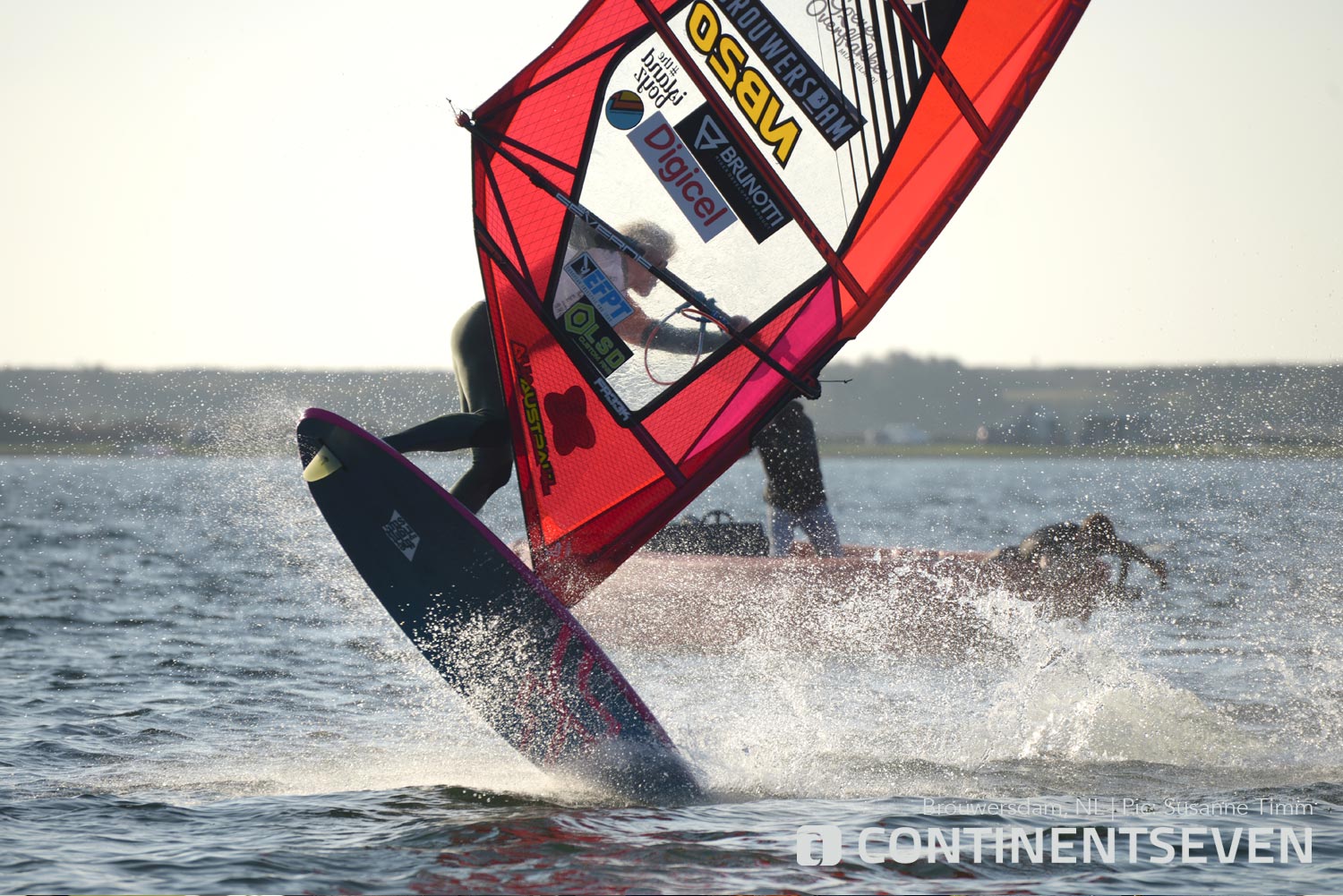 Julien Mas and Sam Esteve brought two costumes for the Tow-In show to entertain the crowd. Sam was in the costume of a dog and Julien in an elk costume. They were not able to finish on the podium but they definitely won the spectator’s hearts. 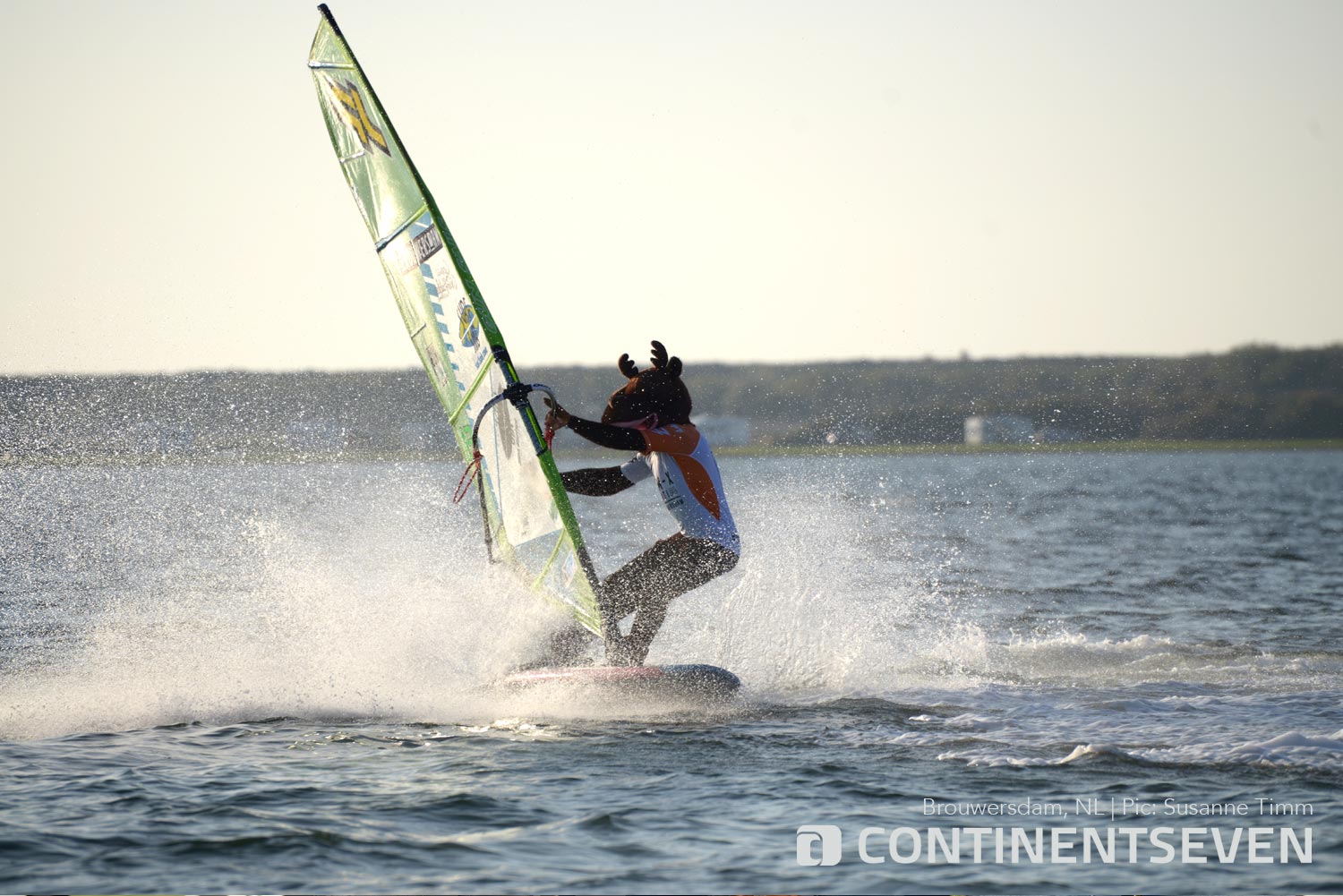 Race direction Tom Hartmann tried to continue with the double elimination of the ladies and men on day 3 but all the attempts got cancelled due to the real light winds. In the ladies division German rider Johanna Rümenapp and 12 year-old Lina Erzen from Slovenia were ready to battle for a chance to advance into the next heat. Now they share the fifth place in the final result, same as Sam Esteve and Davy Scheffers who fought back in the men’s double elimination and finish in 5th too.

48 riders from 15 different nations participated. More than 30% of all competitors were younger than 18 years. It’s great to watch the young generation coming up. From all kids, probably the most outstanding two kids were 13 year-old Lennart Nebauer from Naxos and 12 year-old Lina Erzen from Slovenia. Lennart finished 17th and landed his first Ponch in the competition and Lina slides through nice Air Jibes already. 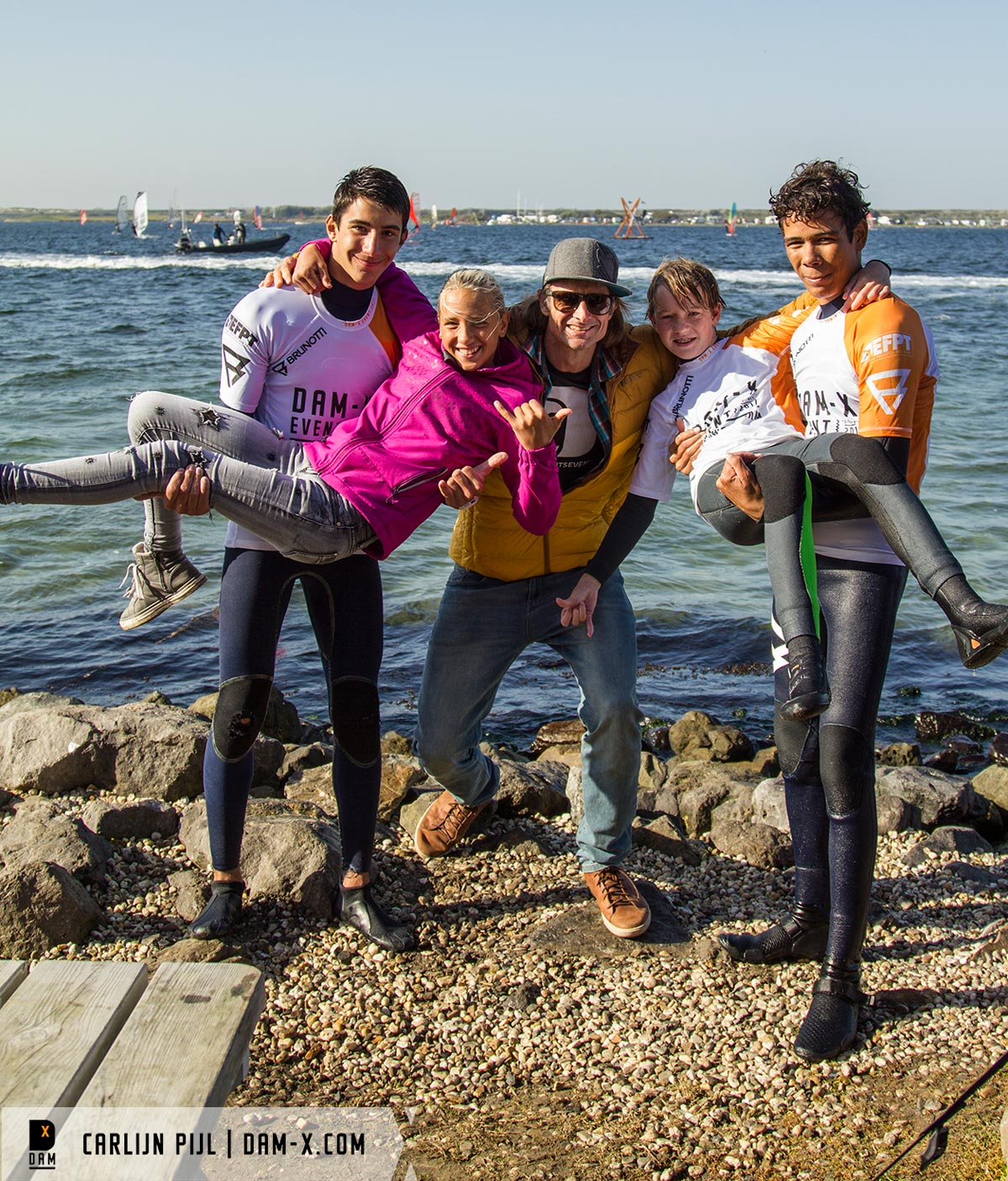 Some riders were missing: Dieter van der Eyken and last year’s winner Steven van Broeckhoven are injured and Yentel Caers wasn’t allowed to compete in the windsurfing event due to a PWA rule, who does not allow PWA riders to enter more than two EFPT events per year.
Rick Jendrusch unfortunately dislocated his left shoulder during a Shove-It Spock in his heat against Amado Vrieswijk. Rick just was on the road to recovery from his last shoulder dislocation and wanted to take it easy during this competition. The shoulder dislocated already for the third time within one year and Rick will need to rest and go through a period of intense rehab to be fit for the next season. 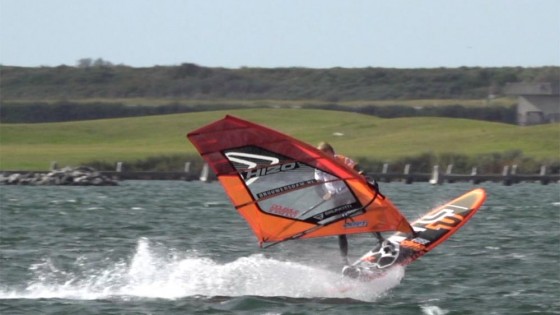 The event not only saw a world class freestyle and tow-in competition. Many other activities were organized by the Brouwersdam Crew. A lot of brands (Fanatic/North, JP/NeilPryde, Naish, Point-7, Starboard/Severne, Tabou/Gaastra) presented their 2018 equipment and public people had the chance to test the new gear. Visitors, especially kids, tested SUP boards, skateboards or the famous water jump. The Dutch windsurfing organization ran a fun Slalom event for different age groups and even for pros with almost 180 windsurfers participating. 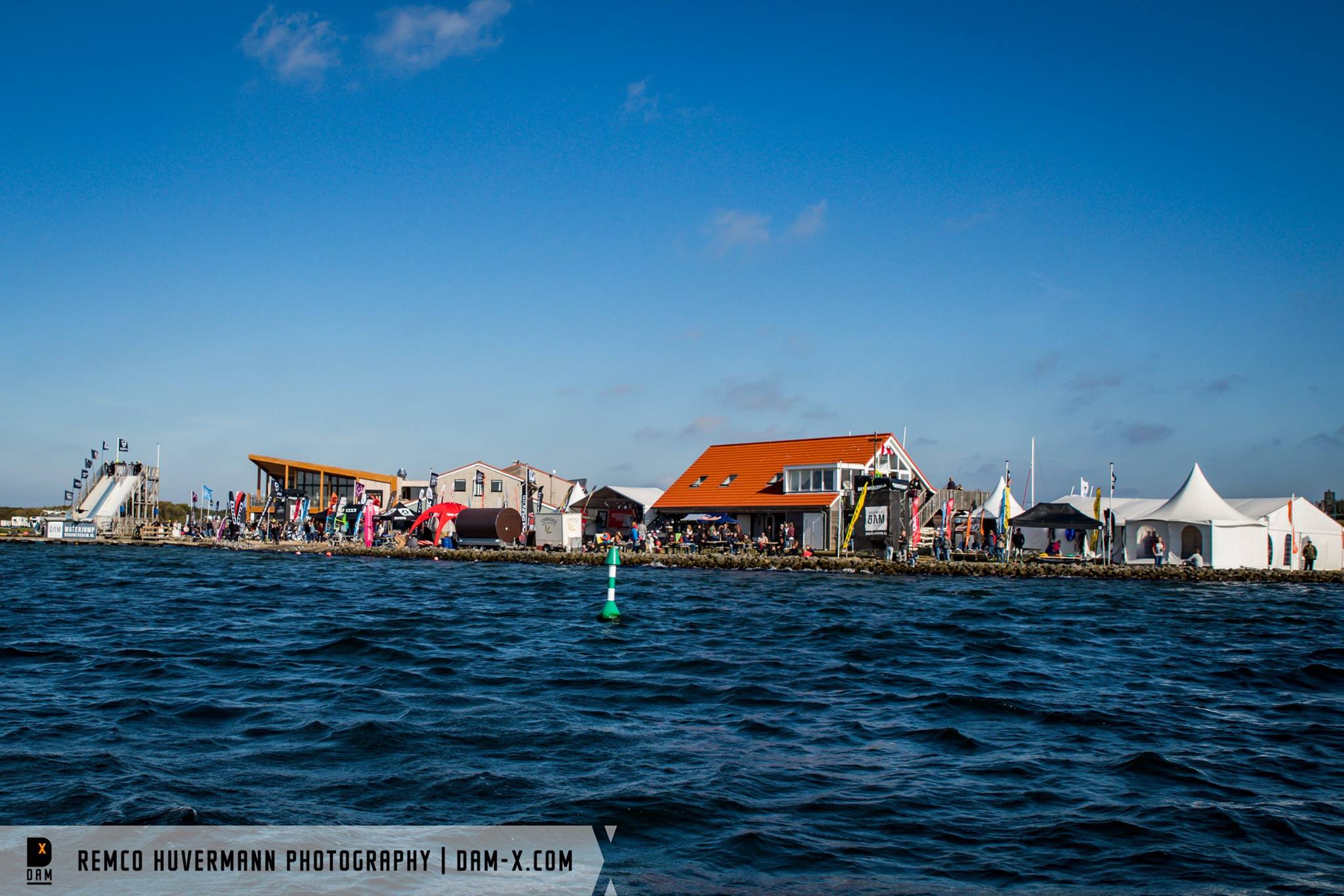 A moment of honor 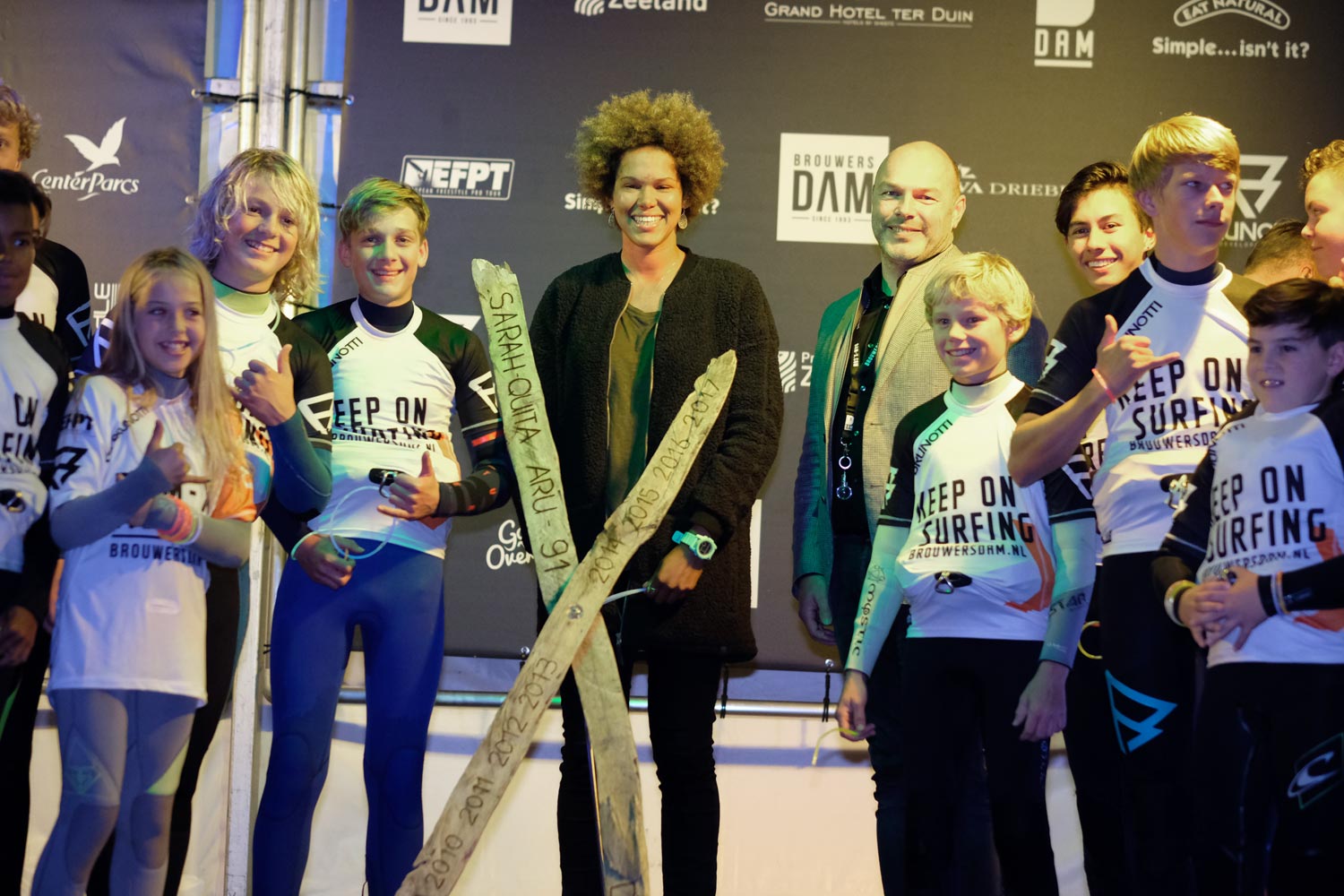 How to NOT open a bottle of champagne with Arrianne Aukes…. 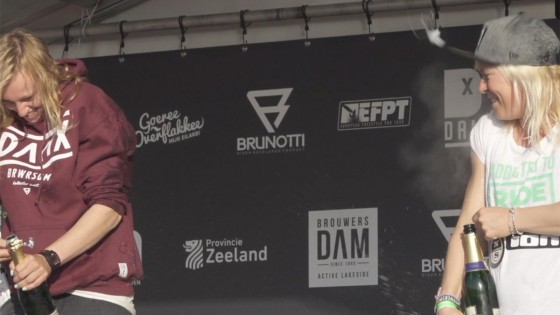 Francesco Cappuzzo landed on a filmer during the tow-in show. Luckily nothing happened. 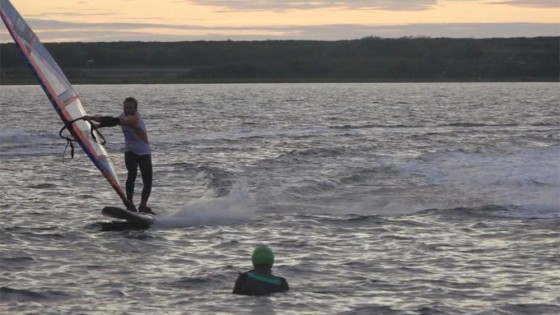 The sunrises at Brouwersdam are beautiful and it’s worth to get up early and witness the sun rising. We stayed in one of these cozy lodges directly at the spot and getting up was never easier 😉 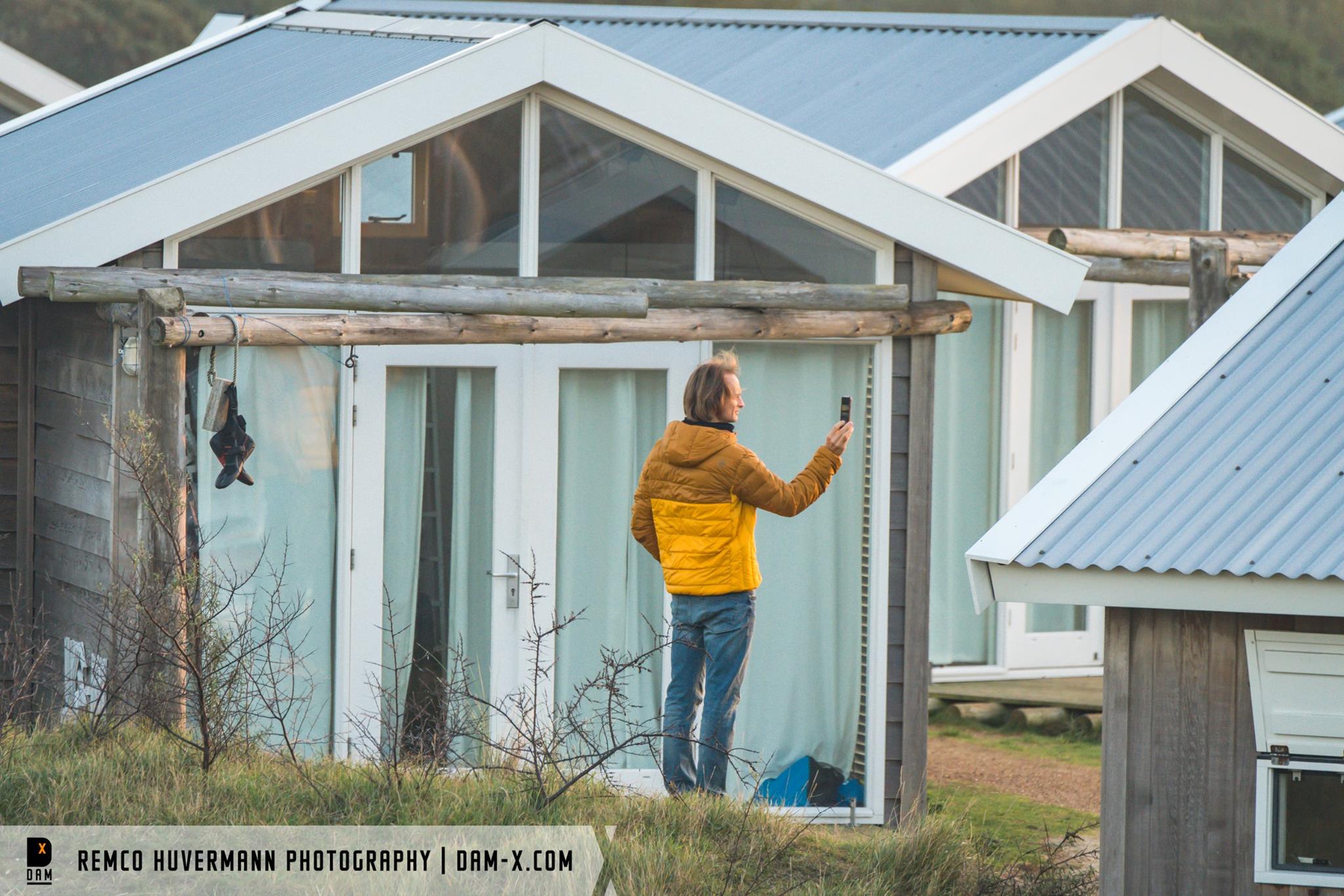 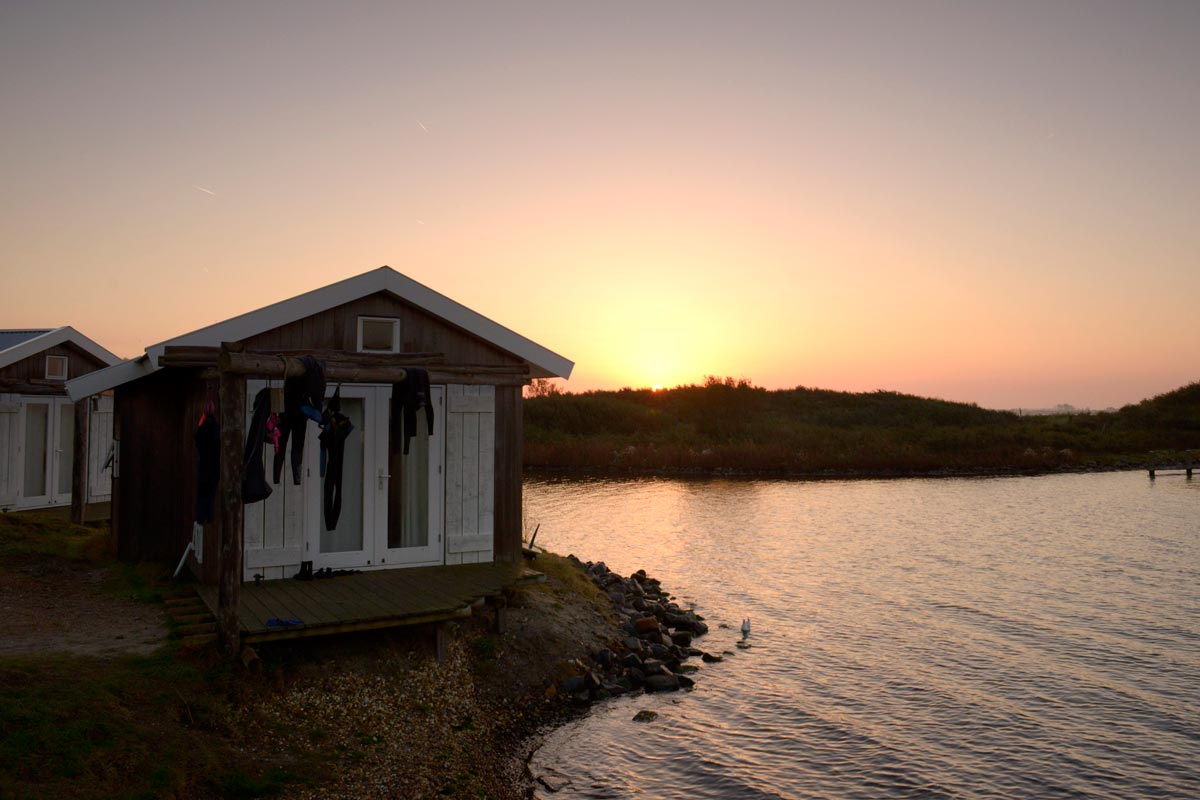 We really had a good time at the DAM-X event. The organizers of the event always manage to combine the fun and the competition part very well, what makes the event very special!

The PWA does not allow more then 2 events other then the PWA to compete! Serious, the pwa is half dead with 2 freestyle events and 3 wave events. They should do more events and do it cheaper for the sponsors. Or at least rethink, because word champ after 2 events??