The second day of the EFPT DAM-X event in Brouwersdam was a sunny warm day with lighter wind conditions (10-18 knots) but we saw some nice freestyle action. The heat area was huge, but the riders came closer to the shore in the course of their heats and gave the specatators a chance to follow the action. At the moment six men and six women remain in the run for the podium positions.

Check out the video from day two and some additional facts below the video.

+ Davy Scheffers was the rider of day 2. He stormed through two heats in the double elimination landing difficult double moves and power moves on his 5.2m. He defeated a strong sailing Adam Sims and an incredible consistent Riccardo Marca. He now will face French super talent Sam Esteve, who is definitely on form but needs a bit more wind to perform on his best level.

+ 13 year-old Lennart Neubauer from Naxos, Greece landed his first Ponch in a competition.

+ 13 year-old Lina Erzen from Slovenia showed good skills in the double and made it already to place 6 in the double elimination.

+ Local freestyler Tim Ruyssenaars achieved his best career result to date taking down Pavel Khomenko, Matteo Testa and Julian Wiemar. He would have then faced Rick Jendrusch, who had to pull out of the competition due to his shoulder injury. Ruyssenaars then advanced straight to compete against Sam Esteve, who stopped his run through the double elimination.

+ In the evening the annual Friday night show was staged, including a tow-in show and a night SUP race to raise money for a local animal shelter. 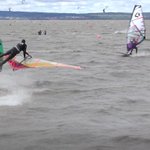