Until now, the Centaur King of the Wind EFPT event was including everything a European championship spectator could wish for: strong winds, flat water, sunshine and a finished Single Elimination. The Dutch sailor Davy Scheffers convinced the judges most and finished on top of the podium. In a close final he was able to beat the Belgian Dieter van der Eyken, the winner of the last EFPT event at Le Brusc. Finishing in third place was the Israeli freestyle windsurfer Adam Gavriel and in fourth Andy Chambers.

We asked Davy for a quick statement after his victory today.

Davy Scheffers: “For me the single elimination went great. The first day was really gusty but delivered good action. Some good guys were out rippin’ and me and Dieter could get into the finals. The wind was shifting a lot and dropped fully so they postponed the finals to the next day! We had a great globalshot party till the late hours but with some good breakfast we were fit enough to compete. The wind was strong but dropped totally. Me and Dieter were both on 4.8 and tryed to perform the best. I have been doing some double moves, Burner, Ponch and I think the winning move was actually a quite cool Chacho in front of the judges. I don´t know what Dieter did in the heat, for sure he had also some good tricks if you look to the light conditions and maybe it was really close … whatever I have won and I am just really happy. The forecast dropped completely so maybe we dont get any action more… For me it is just important to win this event after I was third in France and beside winning the event I am really hungry to go back home with the overall title..  The PWA tour did not really went good for me, so this gives me motivation and I never had a nice overall 1st place… Sooo super happy!!!” 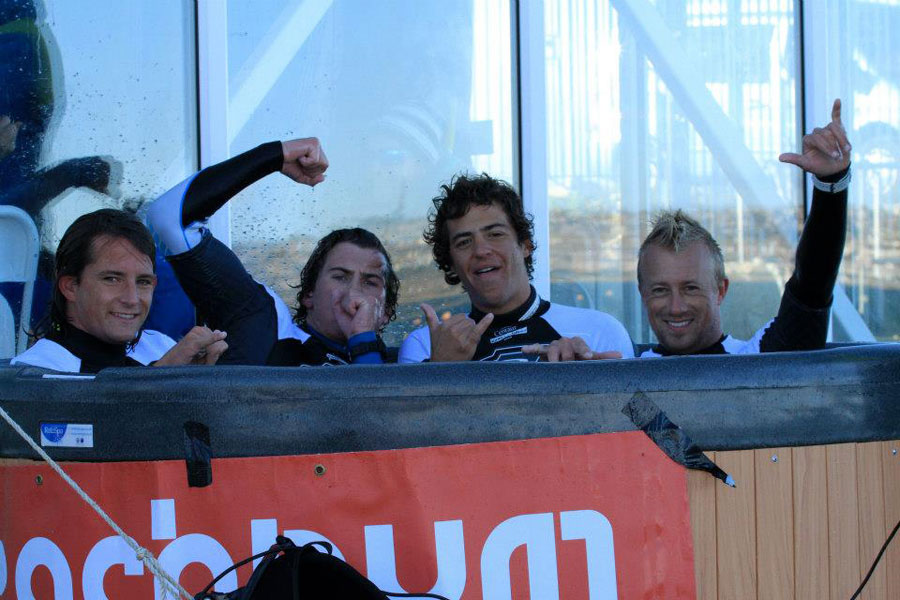 The top 4 of the single elimination – Pic: EFPT

After briefs the first possible start was at 11am, there were constant heats until just before dark when the wind dropped after a bit of a freak storm.  Just before it died there was some intense wind and the latter heats were quite spectacular as everyone was stacked, even after mid heat sail changes. All but the finals of the single elimination were completed. The finals got then competed in the morning of the next day. Still waiting for their first heats are the ladies, who will crown the Femi Pleasure Queen of the Wind. The ladies single elimination comes-up next and following that will be the mens double elimination. 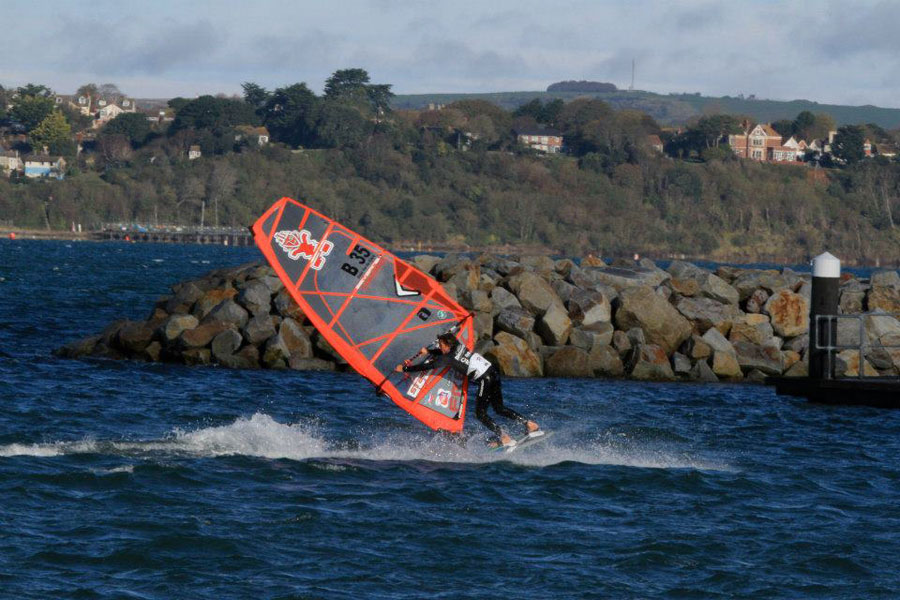 The cold wind tricked the crew and rider a few times and the start had to be postponed several times. At 12.30 the conditions seemed to be sufficient to start the heats and race director Tom Hartmann sent the riders out on the water. Standing out sailors in the first round were definitely Greek sailor Athanasiou, who sailed his first heat against himself and showed an outstanding heat, making the most of every gust. Also Malte Hecht, member of the Sailloft Hamburg team sailed a solid heat leaving his british opponent Ben Lee no chance. Furthermore young Dutch Tim Ruyssenaars surprised with Burners and Culos at spots where there wasn’t any wind expected. The closer the elimination progressed towards the final heats the higher level got. Scheffers was easily spinning his way through his heats, pulling off some moves directly in front of the spectators at the OTC. After changing to a bigger sail in his heat against Mas, he started off switch at the beach and planed through an eslider, a funnell and gozzada all within one run. Sailing with more confidence was also Israeli Adam Gavriel after his 7th place in France. On his way to the losers final he beat Malte Hecht and Andraz Zan clearly.

The riders who waited for their heats could seize the 42 degrees warm hot tub in front of the center to heat up again or should we say defreeze… From there they could watch a very strong sailing Andy ‘Bubble’ Chambers who was absolutely on fire today, convincing the judges with style, diversity, variation and also technical maneuvers. Dieter Van der Eyken and Rick Jendrusch showed double move combinations on a top level including also massive spock culos. Dieter beat his travel mate and afterwards dispatched of Chambers in a very close heat to meet Scheffers in the final.

In the losers final Chambers and Gavriel hit the water on their 4.8’s and the warmest wetsuit they could get hold of. In the onshore conditions we saw a very close heat between the Brit and the Israeli, both showing a good variation of maneuvers, but perhaps just lacking the power moves because of the slightly lower wind. Whilst Bubble was showing routine with a willy skipper, an eslider, a grubby, a spock and also a shaka, Adam managed to top this up with shakas on both tacks and slightly cleaner  execution. A three to two decision still favoured Gavriel who couldn’t stop smiling after the announcement. After two 7th overall places in the previous EFPT competitions he now managed to jump into the top five! 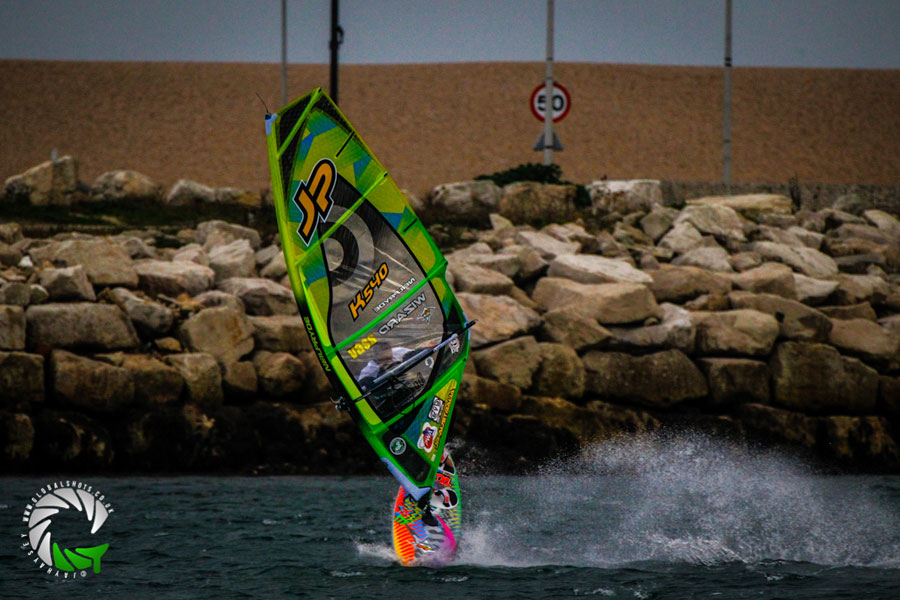 In today´s final the wind dropped totally, but Davy and Dieter made the best out of it. The winners final saw two really strong opponents with Dieter Van der Eyken wanting to win again and Davy Scheffers who was ready to strike back after his third overall place in France. The two riders sailed a very tactical heat, copying the moves from each other, trying to make them look better, smoother and more radical. Move of the day was definitely shown by the Dutch rider Scheffers as he did a perfectly clean Chacho right in front of the judges, fully claiming it afterwards – well deserved though. Dieter is hoping for more wind to start a Double Elimination: “Got second in the single was really cold and pretty close, now see if we get wind for the double the forecast changes the whole time!!”

THE SPOT:
OTC in Weymouth. The OTC is located right next to the Portland Sailing Academy, also been the venue for the Olympic sailing disciplines 2012. Sunshine and wind welcomed the riders and it became clear how much potential this spot has as a destination for sailing and windsurfing competition.

THE BRITS:
This first EFPT event in the UK had a strong force of home-grown competitors.  There were twelve UK guys and six out of the seven entered girls.  Of these twelve, four got through their heats.  Andy Chambers, Jamie Drummond, Nick Bentley and Adam Sims all made it through to the second round.  Unfortunately three of these were all in the same second round heat (heats of four) and only Andy “Bubble” Chambers made it through.  Bubble, the 2012 UK freestyle champion then cruised through the semi-final and found himself alongside Adam Gavriel, from Israel, for the losers final competing for third place overall.
But there are some Brits giving their debut in international competition. Charlie Jones and Josh Sparks, both under 18, decided to give it a shot this year. While some of the english sailors who already competed in France and also got involved showed more confidence and were already hunting the EFPT team for the 2013 tour plan.

RESULT AFTER THE SINGLE ELIMINATION

[…] from the first day of the EFPT King of the Wind. Read more about the first two days of the event here. http://www