The second day of the Défi Wind has left some traces on the participants. With nearly 80 kilometers ran, under a North wind flow blowing over 30 knots on the second round, the 1000 competitors who are actually engaged on this incredible ride do not demerit. Pierre Mortefon has confirmed his lead by winning the second race just ahead Anders Bringdal, who has won the third one. 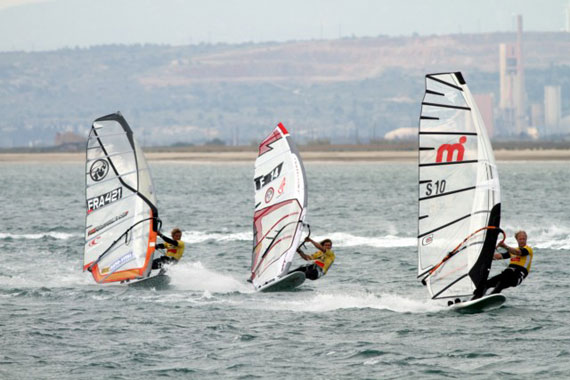 The departure of round No. 2 was given at 11:03 am in a strong Tramontane. Pierre Mortefon, the first round’s winner, has confirmed his first place by winning the morning’s leg ahead Anders Bringdal and Julien Quentel. The latter confided on arrival: “It was a great fight. The three of us have sailed together the whole way and the finish was really tricky. Pierre has benefited from a burst just before the line and has overtaken Anders and myself! ” On the afternoon leg, the departure was given at 3:40pm, and challengers had to deal with a 30 knots wind. Anders, who has reached 60 km / h aboard, has crossed the finish line with a comfortable 20 seconds lead ahead Pascal Toselli and Pierre Mortefon. “Young people are not as nasty when the wind is stronger” confided Anders laughing at the finish. “For sure I am heavier and thus faster when the wind rises up.”

In total, there are 48 women on the Défi Wind 2010. From professional ones as Valerie Ghibaudo (first woman on the three consecutive rounds) to young ones as Lucile Lefevre (14 years old and French snowboard champion), diversity does exist on the water. It is a real challenge for them, as Valerie mentioned upon arrival on the beach: “It is a tough race. The wind refuses continuously and it is not easy to tune. From chop to the variation of wind and the incredible amount of riders, you have to be really careful.” Lise Vidal defines the race as “a true endurance one. The hardest thing for me is that after a 10 km straight line, the jibe is quite complex as we are completely static on board. It is very difficult for the muscles but I am very happy to be here and hope to finish just behind Valerie! “