Dany Bruch released a clip about wave sailing at Confital, a well known break in the surfing and body board scene on Tenerife (not to confuse with El Confital on Gran Canaria). It’s a hard core wave and really dangerous and has few other names like“La Machacona” or ”The Crusher”. We asked Dany about his session at Confital and why he was not taking part in the this year’s Aloha Classic, which was the 5th and final tour stop on the 2013 PWA tour.

C7: When did you film the video at Confital?

Dany Bruch: This was on the last day of the PWA event from Tenerife, on the Friday, just before the prize giving on the main square in El Médano.

C7: Did you sail this spot many times?

Dany Bruch: I have sailed it like 10 years ago. Back then I timed it wrong with the tide and broke every single piece of gear…so I haven’t thought to go back until now. I guess my level is higher now, so this time it all went well and I am keen to go back as soon it is happening. With the right tide you have got like a 2 hours window to sail it and in summer it actually works a lot of times…super keen to score it again! It’s an amazing wave! 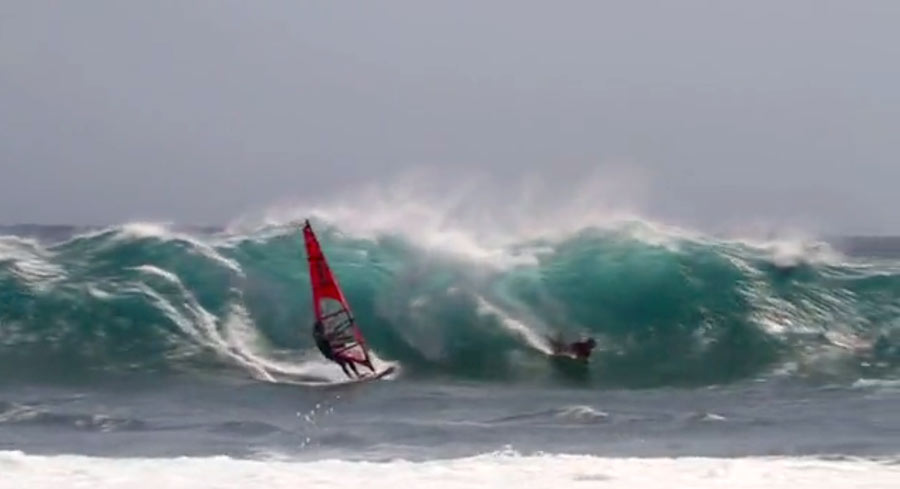 Dany shares a wave with a body boarder

C7: What’s about the local surfers and body borders? Are the y pissed you sail there or is there enough respect for a windsurfer?

Dany Bruch: He he he…there is no respect at all for a windsurfer…I have the luck that I have surfed this wave since I am 15 years old…one of my favorite waves from all over the world!!!…have had my best barrels there and also my best wipe outs…he he he…so I know most of the guys out there and they gave me a bit of fun time. But they also warned me that if they see one other guy wanting to windsurf it, it would be over also for me…so I better make sure to protect it! 😉 In any case, it was very hard for me to make the body boarders understand that they had to not even look into the wave when I was going for one…as they would be in the spot of were I would go for the air…it worked well when my mates were out, as they were cleaning the peak when I was going for one…but once they went back on the beach the others started to drop in on me…they flamed so many good waves that I could have hit…so yeah…not that easy. 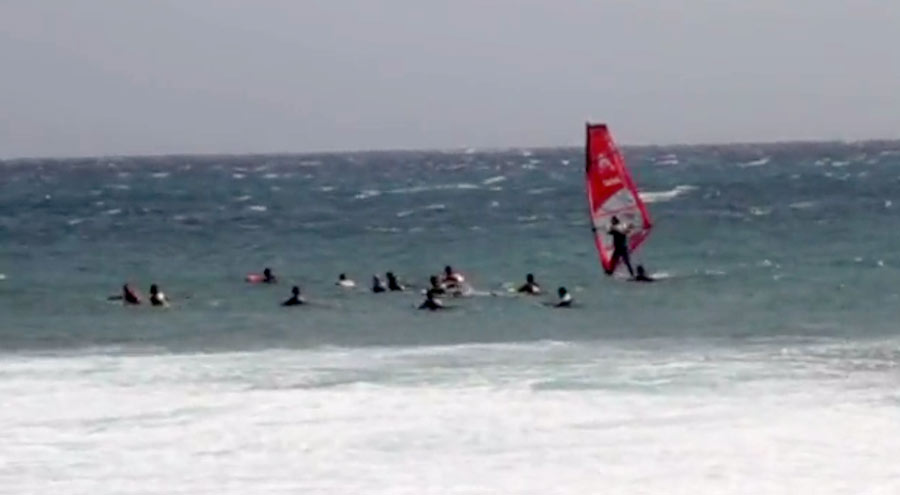 C7: The spot looks dangerous and difficult. Are you scared when sailing there?

Dany Bruch: The spot is bloody dangerous for sure! Even on the high tide the wave breaks on about 30cm of water and the bottom is really not inviting to hit…vulcan sharp rock all over the place…one mistake and you are on the rocks! I actually had a pretty nasty wipe out, that you can see on my last wave on the clip…I let go and the board started to spin around and hit me directly on my neck…the impact was so hard that I got like an electric shock and was half paralyzed…after once out on the beach I had a massive lump on the neck and a lot of pain. The lump was really close to my head so right after we did the prize giving of the PWA event I went to hospital to let it check…they made some scans and tests and I had to spend the night in hospital…what a way to celebrate the great event we just had finished to organize… 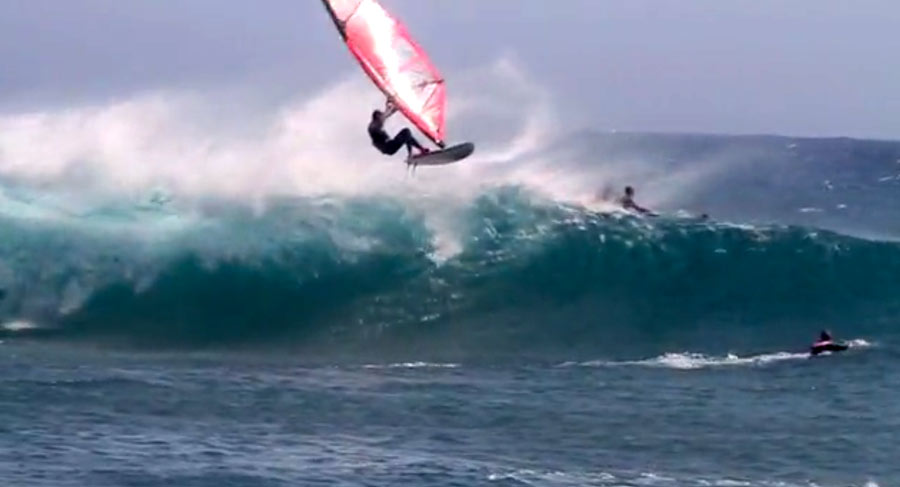 C7: Why did you decide to not compete at the Aloha Classic?

Dany Bruch: Yeah, this is a bummer really. I was super keen to go to Maui…but I had some open work to finish on the R&D site for Starboard that was penciled in for this time of the year. As the event got confirmed so late in the year I could not change the fact that I had to finish the 2015 boards by mid November. So I had to cancel it for this time. My year so far has also not been that great, so I guess this has been the right decision. My plan was to put the focus on Chile 120%!! I went to Thailand and was looking forward for some testing and training in Western Australia for Chile. After that testing period I had the plan to return back in Thailand for a week and then directly to Chile! But now Chile is cancelled and plans have changed. (Dany is ranked 19th with two results only)

C7: What means the cancellation of the Chile event to you? Are you very disappointed?

Dany Bruch: Yes indeed, I am very dissapointed. I really thought that Chile will happen. I thought it was way more secure than Maui. I even got my tickets already…so yeah..I will be going anyways to check it out and maybe get some training in for next year if it will take place.

What can I say, I was betting on Chile to improve my result from this year, but now with only 2 events counting for me I am very far behind in the ranking…gutted…what a weird year. It’s my worst result since I came back on the tour 7 years ago, but yeah..life goes on and I will forget it and focus on next year. I know that I can make it back into the top 10. Next year will be better! 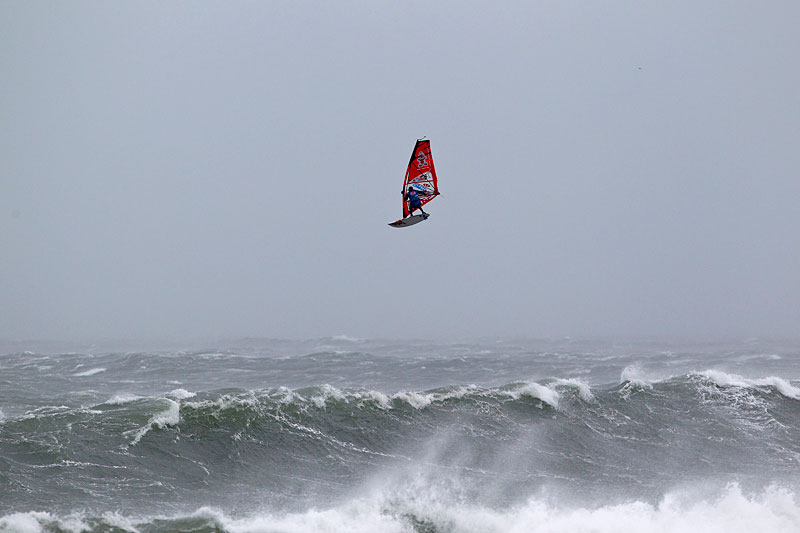 The Red Bull Storm Chase final is on the to do list of Dany for 2013 (Pic: John Carter)

C7: Did you follow the Maui event online despite you knew that you missed an important event?

Dany Bruch: Yeah for sure! I followed almost all the heats! Being in Thailand the time difference was not that bad, so I could follow. It looked pretty good I got to say! I wish now that I could have gone. A few heats trough would have made a massive difference to my existing ranking…bummer…I am sorry for Philip, but also happy for Alex and Brawzi! Both sailed really well and deserved to be up there! Also big congrats to Levi! He proved he is the man at Ho’okipa! It would be sick to see the Hawaiians back on tour, same as Kauli! Congrats to all of them!

C7: The final event of the Storm Chase is coming up. How will you prepare for this final highlight of your competition season?

Dany Bruch: I am always training to be in shape! The Storm Chase is a big thing for the end of this season. So I will go hard for it! There is nothing to hold back now and we all will go big for sure!! And this falling back in the PWA ranking has actually made me realize how hard it is to be up there right now and is giving lots of positive drive to go harder and do better! I am keener than ever!! Full taquet!! 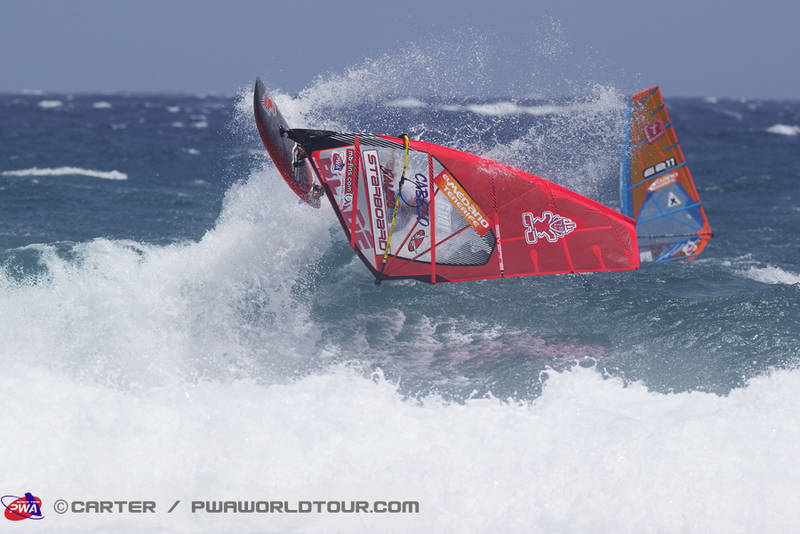 Dany at his home spot during the PWA World Cup

The well known spot in the surfing community is the world class right handed tube located in Gran Canaria, not this one in Tenerife:

You are totally right! The real name of the spot is “La Machacona”…”The Crusher”…we do call it “Confital” too, for it’s similarity, in some sections of the wave, of the real “Confital”…maybe its also cause the wave, being such a crusher as we all know, cause we all have been crushed heaps of times against the rocky volcanic reef, sounds a bit more attractive calling it Confital…;-)