The 7th edition of the Curacao Challenge took place at the Spanish waters between May 14 and 17, 2015 directly at the main location of Windsurfing Curacao. With all the slalom and freestyle competitions being held on the same area it was a great event for all the spectators that gathered on the beach! Four days of competing interwove with chillings on the beach, good food and parties and all of that in an international environment!

It all began with the slalom competition on Thursday May 14. Divided in two categories, beginners and advanced, it was a mixture of young blood competing alongside or against pros like Taty Frans. During the whole four days a total of 17 races were held. In the end it was Taty Frans, who took the title in the advanced category. The younger categories were won by Jean Paul Da Silva De Goes and Stefan de Bell.

The freestyle event was held on Saturday May 16. A firework of the latest tricks was showcased by the present pros but also by the upcoming talents from Curacao. Double Culos, Kabikuchis, Futures, Shaka Flakas and more. Kiri Thode, Taty Frans and Youp Schmit made a spectacular show. In the ladies category Arianne Aukes made it on top. Kiri won the men pro category. Kareem Naipal from Curacao won the amateur category.

The video by Maarten Molenaar, it’s 15 minutes long film, shows how nice the Curacao Challenge 2015 event was and how many enthusiastic kids live the sport on the Carribean island of Curacao. The sport and the scene is definitely alive there and it’s a good chance to see a few of the kids in top level events in the near future. Freestyle local Rafael de Windt (CUR-45) already has the level and participated in a few EFPT and PWA events in the past. 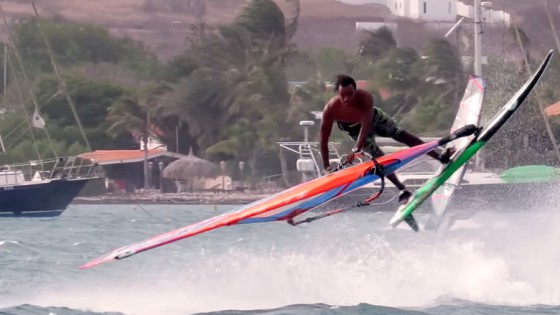 The movie about the Curacao Challenge 2015