A report by Jay Haysey

After a short break from the Club Vass Slalom event due to a couple of lighter wind afternoons it is back with full power cross-shore thermals this time separating the men from the boys and those who even dared to bear away for the gybe marks! Rounds 5 & 6  saw winds of 35+ knots a week ago across the whole bay of Vassiliki and once again the course was laid out with 3 downwind gybe marks. 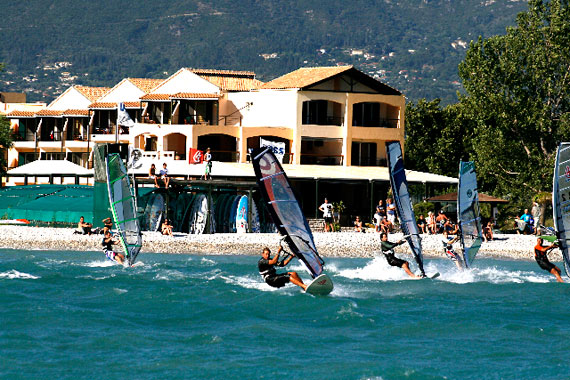 After the start Colin took the lead straight, Niko was too far down in he leesid

There was another great turn out on the start-line from all the centers along the beach which was great to see and everyone getting involved really gets the adrenaline going! As we saw from this event, you have no friends when your racing but back in the Club Vass Cocktail Bar after the drinks were flowing fast smiles were everywhere! Round 5  saw the elite of slalom, Greece’s very own: local Niko get off to a lightning start and using his skill and body weight to hold down his 6.7 m sail! 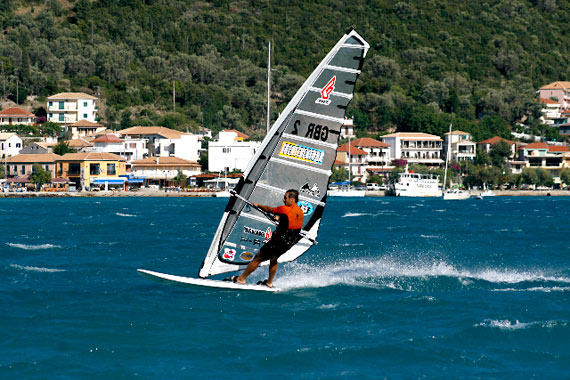 Local Niko was winning Race 5 of the Slalom series at Vassiliki.

Super close behind him was Club Vass‘ Pro Coach Colin ‘Whippy’ Dixon with maybe one more gybe mark could of piped Niko for the win, Andy Barnez of Flying Fish and Cliff from Neilson fought it out hard for the whole race with some nice aggressive racing tactics but it was Barnez who just managed to hold on to the last podium position! After a quick break it was straight into Round 6 and this time it was Colin ‘Whippy’ Dixon and Barnez with an unbelievable start, coming into gybe 2 it was Barnez leading Colin, but not for long, Colin made an outstanding gybe round turn 3 and accelerated out of the turn to make a comfortable lead taking the win from Barnez, Clife and Becky! Greece’s Niko struggling slightly in race 2 to keep his board on the water managed a superb 5th place.

Colin ‘Whippy’ Dixon dominated race 2 and highlighted exactly how the standard of performance has shot through the ceiling! His aggressive style of gybing has to give him sailor of the day for his sheer determination and fearlessness into the gybe marks! 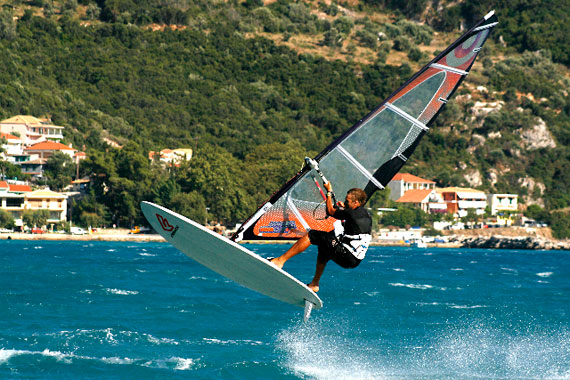 WINNERS WORDS by Colin Dixen: “That was an awesome race, especially in race 2 Barnez got a sick start but I knew from the first race that I was faster round the corners. On the last gybe mark I saw him going in wide so I just sent it in tight and managed to get out in front of him and up wind and from there it was pretty straight forward, straight line it to the finish line and go as fast a possible! I managed to get a comfortable lead and even pull off a few jumps for Jay, the photographer haha!! Can’t wait till next week, I hope its blowing its nuts off again! We had so much fun! See you next time!”

Check out the blog of the author Jay Haysey!!