More than a month is over since an 8.8 magnitude earthquake destroyed Chile and some parts of its coastline with a big Tsunami. And scientist give again warnings for a new big earthquake more in the north. Chile is just starting slowly to rebuild everything, but how is the situation at Matanzas or Topocalma, the most known windsurfing spots there? 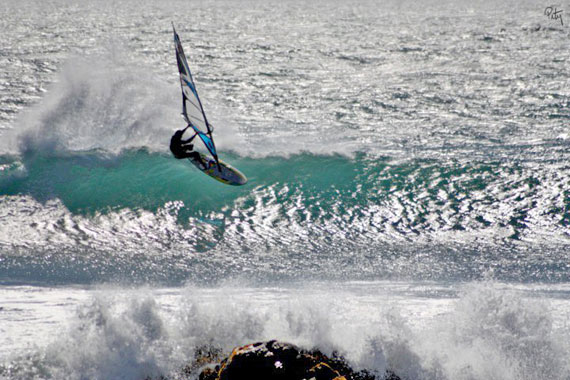 Nicolas Ramirez, from Santiago, Chile, had again already good windsurfing sessions in Matanzas and tells us: “Just like what happens with each community affected by the tsunami, spontaneous iniciatives helped gathering the basics to start right up again: food, clothes, matresses, cleaning the streets & houses. This immediately brought a sensation of strength to the locals, who see the support from all the people who used to windsurf/surf/vacation there. It just came back to what it used to be before the hotel opening, rigging on the grass next to the beach, nice and simple. The hotel was trashed, but the structure is still intact, so it is planned to be rebuilt and reopened for next season (last quarter of 2010). Now, the waves are starting to build up like every fall, before winter. If there was any kind of post-tsunami fear of sailing, now you see again all the riders coming back to Matanzas / RocaCuardada / Pupuya.”

You can check out actual windsurfing pics from Matanzas shot by Piti Amunategui on her Facebook Account here.

In contrast to Matanzas it seems that Topcalma got hit more badly. “The beach, where you used to rig right next to the shore has disappeared, just as if the land went down 1 or 2 meters and the water penetrated the land. It’s impressive to see how far the waves are from the shore right now. We hope that the time and the tides recover the previous beach and break. But besides that, the different spots have suffered changes on the sand banks, so the waves have improved in some spots, running more than they used to before,” Nicolas tells us.

We caught up as well with part time Chile’s resident Victor Fernandez, who was there during the earthquake together with his friends Klaas Voget and Robby Swift. At the moment, Victor stays on Maui, Hawaii for training, testing and participating in the Fanatic/North Sail photoshoot. 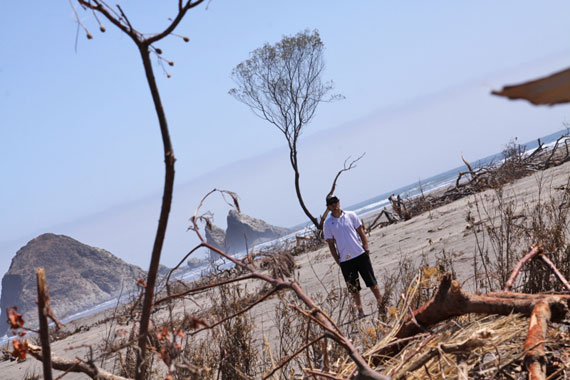 Victor Fernandez at Matanzas after the earthquake

Continentseven: How have things been panning out since the earthquake happened end of February, especially in the Matanzas region?

Victor Fernandez: The earthquake in Chile was catastrophic in some part of the country and Matanzas was also quite damaged by the earthquake but the worst part was the big Tsunami 10 minutes after the big earthquake. It was the most scary part, the water came up about 300 to 400 meters inside the land of Matanzas several times in and out. We also had aftershocks everyday for 3 weeks but smaller than the main one,we had 2 big aftershocks in a row, 1 of 6.9 and 1 of 6.7. They were very scary as well but they were during the day and not in the night as the big one. The people in Matanzas were scared, specially the ones who live close to the sea, thinking that another tsunami can hit their houses again. The good thing about it is that nobody got hurt and it was only material damage.

C7: How hard was your home affected?

Victor: We were lucky that our house is quite uphill and the tsunami has to be very, very big to take our house down. We had some damage in the structure from the big earthquake but it is already repaired, nothing really bad for how strong it was.

C7: What are the feelings of the inhabitants of Matanzas?

Victor: The local people are scared, specially the young people who never witnessed an earthquake with such a magnitude. The old people said that this one was much stronger than the last big one they had in 1985, which was also an 8.5. Many people in Matanzas were sleeping in tents because their houses were very damaged and they had fear of another big one coming. People are trying now to get to the normal live, re-building their houses and going back to normal. For example Felipe Wedeles, a good friend of mine lost his “Hotel Surazo” because of the Tsunami and he wants to re-build his Hotel for the next season. Matanzas is well known for windsurfing in Chile and his hotel together with the camping is giving the windsurfing spirit to the spot.

To conclude, I would like to thank all my friends in Matanzas for being so nice with us, also I would like to say that for sure it has been the scariest moment I´ve ever lived in my life and I ´m happy to be alive and continue windsurfing in such a beautiful country as Chile. All the best…