The Italian windsurfing grandee and founder of 99NoveNove Cesare Cantagalli (I-99) returned  to Cape Town (South Africa) at the end of February, after many years of absence. The inventor of the Cheese Roll used to spend a lot of time in South Africa during the late 80ties and he won the invitational wave contest in South Africa in 1986, the Gunston Cup. And exactly, this Gunston Cup was the reason for Cesare to return and meet with friends from the old times.

Cesare, although he hasn’t been on the windsurfing board since 2008, had some nice windsurfing sessions, too. He still knows how to look good on the board and how to hit the lip. Hats off to the 46 year old Italian. And it seems his fire for windsurfing came back. At the moment Cesare is on his way to Maui to ride some more waves and get back to old form.

Paul Wagstaff and Cesare Cantaglli at the Gunston party

Balz Müller at the Gunston Party in the old lycra

Cesare Canatagalli rigs for a session at the Cape

Cesare Cantagalli in the waves at Scarborough

Cesare Cantagalli with an Aerial off the lip

Cesare Cantagalli with an Aerial off the lip at Scarborough

Cesare Cantagalli and a Baboon

Paul “Waggy” Wagstaff of the water sport shop Bay Sport organized a nice reunion night to celebrate 30 years of the mythical Gunston Cup, an international invitational Windsurf Wave contest in South Africa, which was won by Cesare in 1986. After this event the pictures of the excellent windsurf spots were published in magazines all around the world and South Africa became one of the most important destination for windsurfers. Shapers built up workshops there and magazines started to test equipment.

During the Gunston Cup many characters, who were the representatives of South African windsurfing history in the past, showed up and some of them decided to live in South Africa. The biggest names at the Gunston Party was Terry Weiner (former president of the PBA and founder and organiser of the Gunston event). Terry was a judge at the old Aloha Classic and invited Cesare for the South Africa Tour. On the flight from Maui to Cape Town Terry invented the name Cheese Roll during a conversation with Cesare… no more Killer Loop… and the name of the move was changed to Cheese Roll. Klaus Walter, the first  F2 testimonial, a famous German rider, was there, too. Who else? Ivan van Vuuren, a former national South African champion & Coreban SUP founder, Cameron Bruce (South African National Champion) and Ralf Bachschuster, a very successful German windsurfer on the World Tour.

“What a memorable night. It was wonderful to come back, find this welcome and meet again so many people. In the evolution of the sport it was important to meet in Big Bay with so much enthusiasm. I thank Paul of Bay Sport for organizing this night.” Cesare Cantagalli 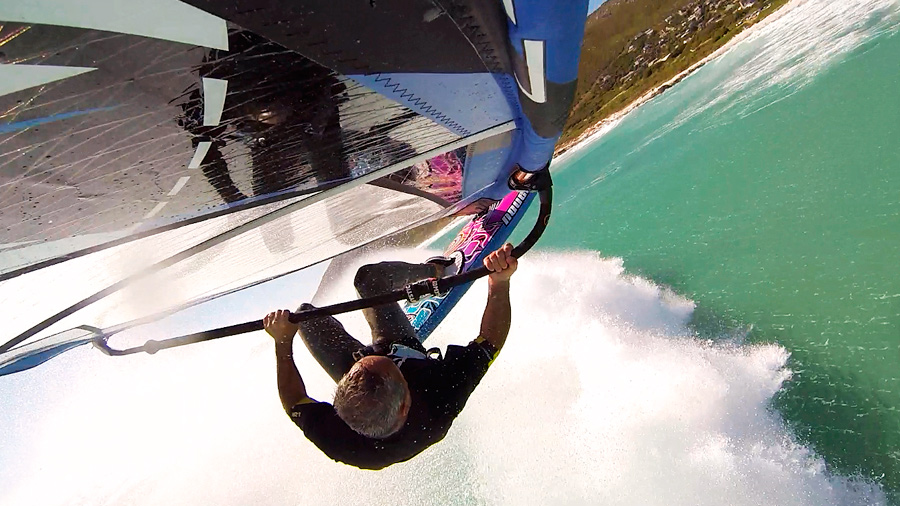 Cesare Cantagalli with a radical Aerial off the lip

And in the following days Cesare made it more than once on the water. At the beginning he had few warm-up sessions at Melkbos, afterwards he drove to Cape Point and on the same day he had two other sessions in Scarborough and Witsands. The 46 year-old Italian from Faenza, who heavily influenced the wave discipline in the past with the invention of revolutionary moves and styles – just think about the Cheese Rolls in the mid 80ties, arched Back Loops and arched Jumps in the 90ties –  travelled the world under the name “Globotour” producing stunning pictures and impressive video footage.

Now Mr. Cheese Roll is back and stoked about the sport as he was it in the past. Actually he gives it all to grow 99NoveNove and he found an investor, what allowed him to establish a really strong international team with Kauli Seadi, Pascall Toselli, Nicolas Agkazciyan, Youp Schmit, Amanda Beenen, Marc Pare, Finian Maynard, Miriam Rasmussen or Valter Scotto. He will as well try to get more fit and wants to get back on the water more often. It doesn’t matter where. Just to feel the new shapes under his feet. The gear has changed and he perhaps will invent new styles again in the near future.

You will see how great his windsurfing technique was already during the late 80s. He was on Fanatic/A.R.T. that days. Later he sailed under the flag of Drops and created his own sailline, called G.O.T (Globo Tour)

Ha – who would have thought – the old man still rips! He showed us all what happens when you think outside the box! I remember the German SURF magazine featuring the first rotational move invented by- and named after this old man. It really opened up a whole world of possibilities informing generations of windsurfers to come. BTW, ‘love the cheeseroll/end-over-end forward hybrid in the closing credits. Can you pass me the cheese please 🙂

He is one of the living greats in this sport, surprisingly underrated.