Ben Van der Steen about his change – an exclusive interview

Ben van der Steen (Ned-57) announced 2 days ago at his Facebook account that he will be on JP/Neilpryde in the upcoming season. We asked Ben, how he came to this decision and what his plans are? 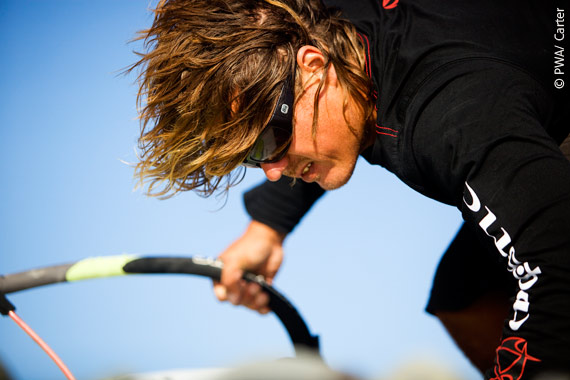 Ben van der Steen is ready for the next race (Pic: PWA/ Carter)

C7: Hi Benny, you just came back from Chile, where you were acting as a protagonist in a movie. How was it?
Ben: Well acting is a big word. We were doing a windsurfing adventure movie were we went to the Cape Hoorn last winter and sailed all around the most southern point of South America in the Patagonia area. It was a great experience to see all these places. I would say a real adventure!!! We just finished the last trip down there but this was mainly wave sailing at the coast. That was easy going . Soon I will have more infos on this project!

C7: The year comes to an end soon and you announced one of the most spectacular changes for 2010! You left your sail-, board- and finsponsor and you made the decision to jump on JP/NP gear together with the biggest names Antoine Albeau and Micah Buzianis. Why did you change?
Ben: Well, after sailing for Exocet for 7 years I felt it was time for change. I just got 30 as well and felt the need to go my own way. All my contracts come to an end at the end of 2009 and for that I went to look around for something, that I really wanted . What brands have gear that suits my sailing style and  boards sizes I would like to use along with the sail sizes I would like to use. In the end it only came down to a few. JP/NP is the outcome of it.

C7: When did you decide to change?
Ben: I decided pretty late, about a month after Sylt I guess , that was after my birthday. That was on the 7th of November.

C7: You had great results on Exocet/Simmer, winning the IFCA Slalom Worldtitle in SA 2009, finishing 11th place in the PWA tour overall Slalom ranking. Did you reach your own asset ceiling, your limit with the current gear and support?

Ben: I don’t think I had reached the limit. The gear was good. Especially some sizes were outstanding. And over the years I did get some real good results on the gear I had .

C7: You were on Neil Pryde sails already some years ago. Is this an advantage for you ?

Ben: Well advantage, I don’t know. I do know Pieter Bijl pretty good, who is the headtester for NP and I also know Robert Stroj pretty good as I started off my career on his sails back with ART. I think these facts help, especially when you need some info on the sails and the tuning.

C7: JP/Neilpryde is a team, which is super focused to have winning teamriders in their team? So, what´s your goal for the upcoming season 2010?

Ben: The goal is to be the best of course. Otherwise we would not be racing…. But the goal is to go for as many top rankings as possible and get a good result in the overall at the end of the year.

C7: Antoine Albeau is the man to beat. Now you have similar gear? Do you see a chance to beat him?

Ben: There is always a chance, but he is still the man as he has shown over and over again in 2009, but I will try my very best to make his life hard on the race course, even when we are on the same team.

C7: Will you compete in Formula as well or will you try to go for a speed worldrecord?
Ben: I will focus on Slalom mainly and the Speed competitions and some wave contests, when I get the chance. So as it looks now I will not be doing Formula racing .

C7: At Simmersails and Exocet you were involved in testing and development a lot? Will you continue this work at JP/NP.
Ben: Well, I have not had a talk about that with JP/NP, but when I am around and they want me to help out with some R&D for sure I will help out.

C7: Where and how will you prepare for the upcoming 2010 tour?
Ben: I will be going to South Africa as soon as I get my new gear and train and test all my stuff there and get some good shots of some wave and slalom action.
Then, when I am back in Europe,  I think I will be heading down to the South of France for some testing and tuning for the season and hook up with some of the other guys.