In the last couple of years Balz Müller has made a name of himself with his own distinctive style on off the water. The Swiss windsurfer is a bundle of energy, always working on new freestyle move creations and is dreaming to land the first triple rotation in freestyle windsurfing. Two weeks ago he has sent us a video showing one of his new creations, the Shifty 720°. Some people think it was just a crash, but it is not. This guy has the guts to do it on purpose. 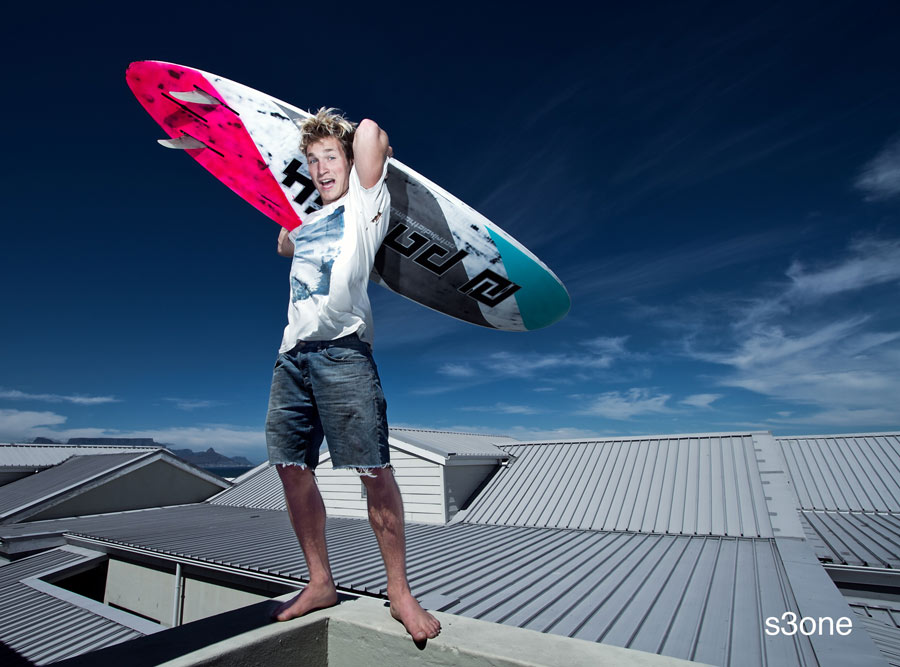 Continentseven: Some people assume that your Shifty 720° move was not on purpose.
Balz Müller: At the day we were filming this Shifty 720° attempt, I was fully focused to get this move done. My little brother Jack sat on his surfboard and tried to film with the go-pro while it was blowing 40knots mistral constantly. My 3.7m was perfectly powered up but there weren’t any good ramps so I didn’t managed to get the height for landing the move as I wanted. But I’ve landed it a few times with water start by jumping over quite big waves.
> Link: Shifty 720°

Continentseven: When did you make your first attempt on this move?
Balz Müller: It was in a normal Shaka crash in 2009 where I tried this crazy rotation the first time. Until then I’ve really started loving this super fast spin and jumped it many times.

Continentseven: Can you please explain the movement of the Shifty 720°.
Balz Müller: Well I can explain it simply. When you get off really high you’re longer in the air so you have enough time for doing the first rotation and then also control the second one. You’re going for a big Shaka, pull your front shoulder and head down and back and push the sail with your rear hand through the rotation. Like this you’re doing the first 360° further keep going in the second rotation by accelerating with the rear hand and looking over your shoulder like in a flat Back loop rotation. Overall it is simply like a double back salto on the trampoline.

Continentseven: Do you know the Drummroll from the Canadian windsurfer Brad Drummond?
Balz Müller: Yeah, I’ve heard a lot about him. He invented the Shove-it into Back loop. Such progressive and creative people like him have always been my greatest sport idols. 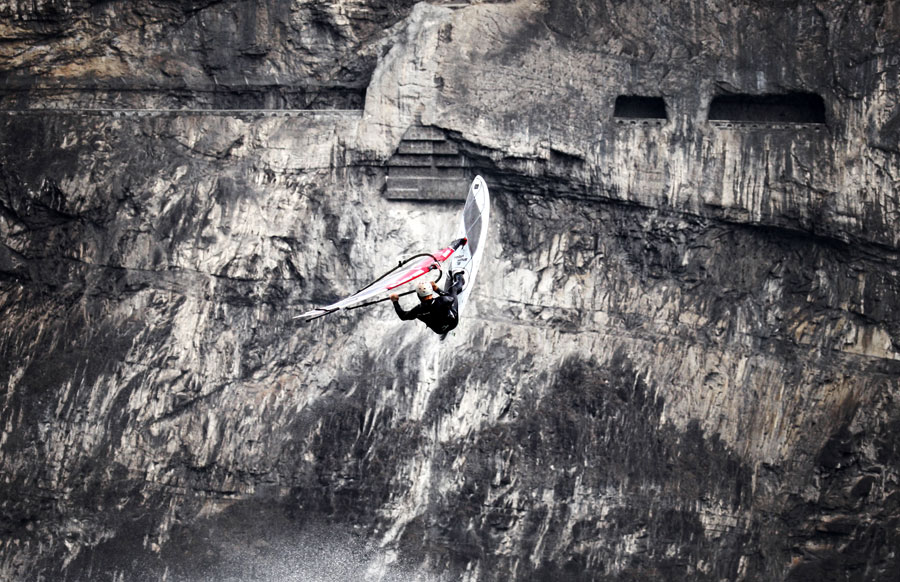 Balz Müller in front of a wall of rock – Lake Uri, Switzerland

Continentseven: Can the Shifty 720° be the winner move, like the Pasko, for the upcoming competition year?
Balz Müller: Honestly I don’t think that the Shifty will be so present in the freestyle discipline next year. But I expect a lot of crazy moves in the near windsurfing future. Like it happened in Snowboarding during the last few years!

Continentseven: Which crazy moves can we expect in the future?
Balz Müller: As an unskilled contest rider I’d better keep silent. But I think it’s a pity that there are so many young talented riders who wouldn’t try something new, moves which they do not need for the competitions. I’m sure that new moves can give our sport more kick than you’d expect.

A few tricks we are trying: Lazy Suzan- Air Tucan , Chubaka- Culo diablo in the air, Spock into Willyskipper or Lollypop, Flaka into Shove it Spock , Switch clew first Ponch, Switch Shove it into Puneta, No hand Air Funnell/Shaka/Clewfirst Flaka, Clew first Shaka in switch, Clewfirst version of a Burner/Culo/Kono, E-slider into Freek, Pushloop into Flaka, Kabikuchi into Culo. Bhuu there many more and on top there is even the possibility to do rail grabs.

Continentseven: What is your goal in terms of moves?
Balz Müller: One big goal is the Cork 1080° in windsurfing, the first triple windsurfing rotation, maybe an Air Pasko into Shifty!  I love the future of freestyle windsurfing! This is going to be awesome for watching. 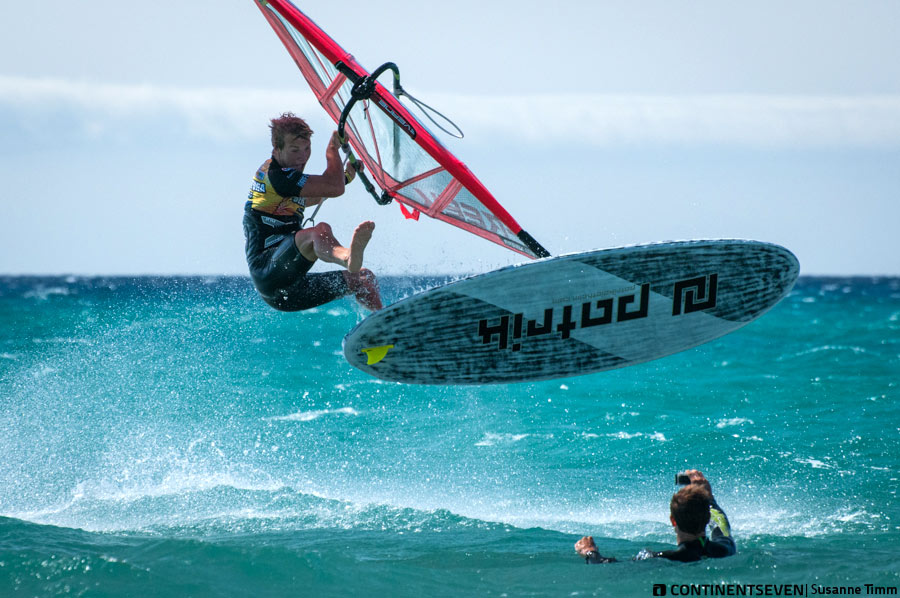 Filming with Balz is always fun

Continentseven: Have you ever had any injuries from windsurfing?
Balz Müller: You can call me a lucky “crash-bird” with all my crazy air times I still managed not to injure myself evil. I really hope that this remains also to the future!

Continentseven: Your videos are pretty popular. Why do you think people like your videos?
Balz Müller: Yeah, I was pretty surprised about that and of course I felt really happy about it. But seriously I think our movies just show the 100% pure reality of what we’re doing out there. That means having fun and going crazy for presenting action in each session. And our movies show too that it’s possible to awaken interest even we make a simple cut without any special gadgets. 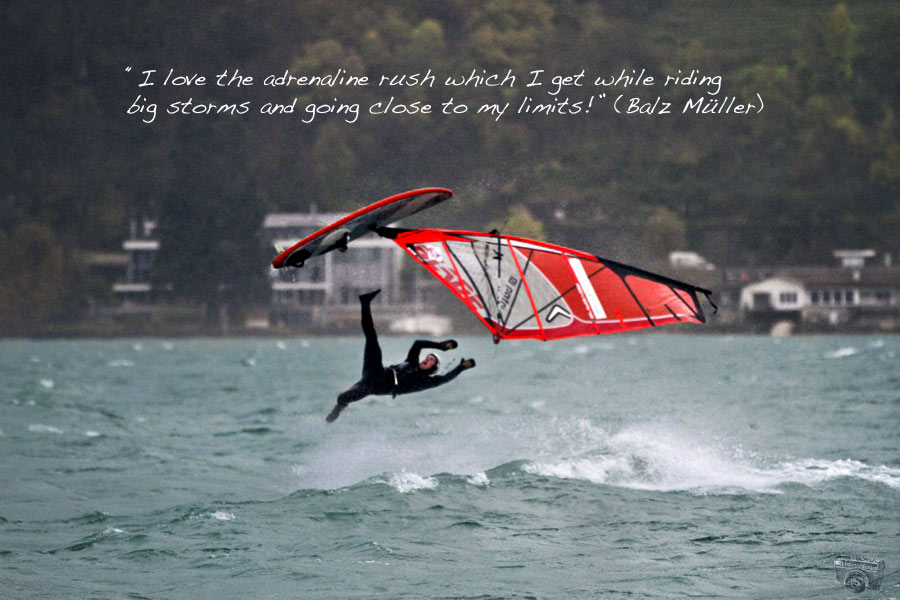 Continentseven: You are one of the riders who is always on the water, in no wind, in not ideal conditions. We have the feeling that you are one of the most passionate sailors out there. Why are you so passionate about windsurfing?
Balz Müller: I just love the nature and the possibilities to play with it! I love the adrenaline rush which I get while riding big storms and going close to my limits! For me there’s nothing comparable to a windsurfing session with my best friends. Pure happiness! Every day on the water is a good day if you accept what you get!

Continentseven: How long have you been windsurfing and how did you start?
Balz Müller: Hmmm… For 10 years now. I’ve started windsurfing because of my dad and with the support of my parents, brothers and friends I was able to improve myself.

Continentseven: And when did you get hooked?
Balz Müller: The first time I was planing on the water I was fully overjoyed. And I’m pretty sure that I’m addicted until today to this great feeling! 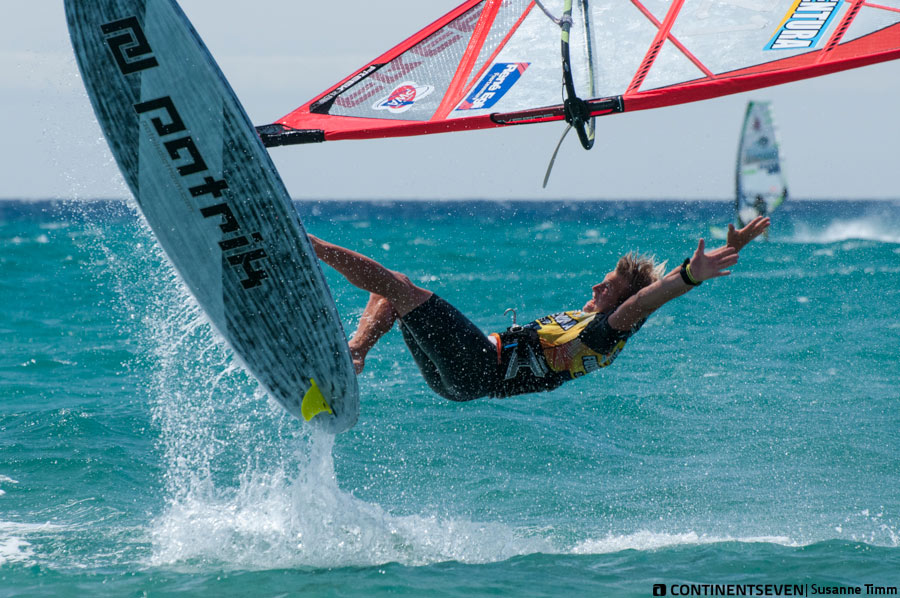 Continentseven: What do you like besides windsurfing?
Balz Müller: I like being in the nature, working as landscaper, drawing, filming, cruising on my carver skate or making nice lines in fresh powder snow on my snowboard. And for sure laugh a lot und eating good food.

Continentseven: At the moment you are in South Africa. How long will you be staying there and what are your plans for 2014?
Balz Müller: Yes I will stay the next 2 months in Cape Town. There I will train for the first indoor Windsurfing X-Games in a big windsurf park full of soft caps to jump on, Rails, Kickers and stuff like that. Seriously, I can say that too many fixed plans destroy my motivation so I will take everything as it happens. My wish is it to go windsurfing as much as possible and just being a part of my favorite sport, windsurfing! Perhaps once as X-Games competitor.

Continentseven: Thanks for the interview and keep it real!!!!

Night session with his brother

oh cam’on, is trying every move but is not landing anyone…
world is full of this windsurfer. but they go better!!
and the shifty is not a new move, totally. a cool wipeout because he can’t control shaka’s properly

Just wanted to mention that even though this guy is an incredible crash artist… I sailed with him a couple of times and he definitely rips. and lands his tricks.The fact that he hasn’t hurt himself trying new things is because he controls it all really well. ( and has a helmet thankfully 😛 ).