Jurgis Vitols (LAT747), Krisjanis Tutans (LAT168) and others visited their favourite spot on the island Hiiumaa in Estonia during  October 2014. The spot is on the farthest corner of Hiiumaa island, called Ristna. Perhaps it is the best wave spot in the Baltic states, but already cold during the late autumn. Rocks form the wave and you need a decent level to ride the waves. Jurgis and Krisjanis definitely have the skills. They both and their friends stayed on the water until it got dark. The clip is called “Days to remember II”. We really like the clip and we hope that the next storms will hit the islands soon, that Jurgis and Krisjanis can return to Ristna to enjoy the surf and the wind. 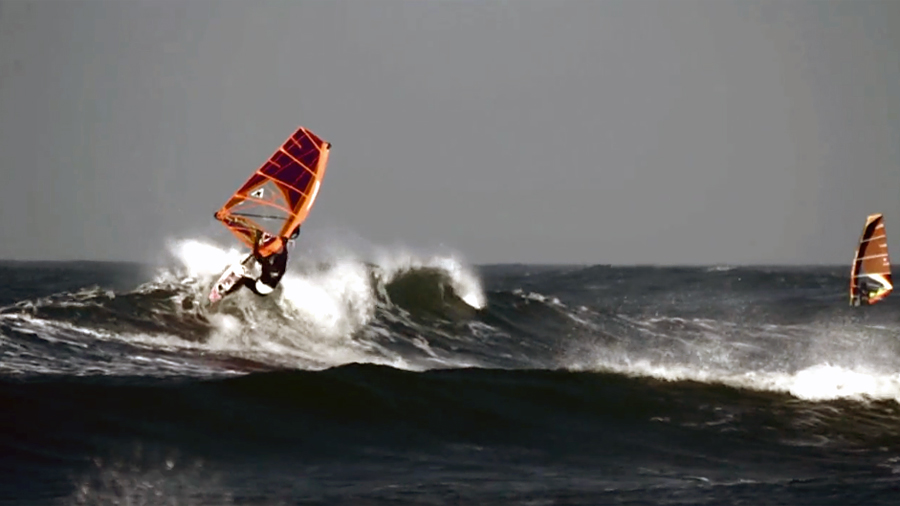 “Nothing has changed. The feeling is still here so the text stays the same. Just some new shots from the same days as before. Enjoy! We can say it’s a “must visit” destination and there’s no arguing about that a 7 hour oneway trip from Riga is definitely worth it even for a few hours surf in this place.

Last year in the end of the October mother nature cherished us with 4 amazing days in a row of wind and waves in Ristna. It doesn’t matter, if it’s sunny, rainy, cloudy, hot or cold. When you get yourselves in these waves you don’t think about cold feet, freezing fingers or gloves that can disturb your fun. Only thing that matters is the smile you get in these waves. Conditions got better and better every day. We love Ristna.” Jurgis Vitols about the trip to Ristna

On January 11th, 2015 the big storm Felix hit the Baltic Sea and Jurgis was out in big conditions at Pavilosta, Latvia.

“The only thing that kept me warm that day was the adrenaline that was pumping through my blood vessels and not just because of those nasty 20+ m/s of wind, but also because of the thought in my head, that only a week ago the sea took away a kite-boarders life.” Jurgis Vitols

It’s always hard to decide if to go there, because it’s such a long trip from my home – Pavilosta, but when i get there, 1 hour windsurf is already reasonable. Love those DTL conditions so much!! Krisjanis Tutans.

good job guys! seem this place to be on fire!

Tweets by @Continentseven
This website is using Google Analytics. Please click here if you want to opt-out. Click here to opt-out.
2
0
Would love your thoughts, please comment.x
()
x
| Reply
We use cookies to ensure that we give you the best experience on our website. If you continue to use this site we will assume that you are happy with it.OkNoRead more