The first first day of the  AWT/PWA Aloha Classic is finished.  The AWT event acts as an a qualifier for the PWA event. The top 6 sailors from the AWT Pro Fleet results, who are not otherwise qualified for the PWA competition will get a place in the PWA event.  24 heats of the AWT Pro category and 3 of the women got completed.

This video is the live recording from the first day of competition. 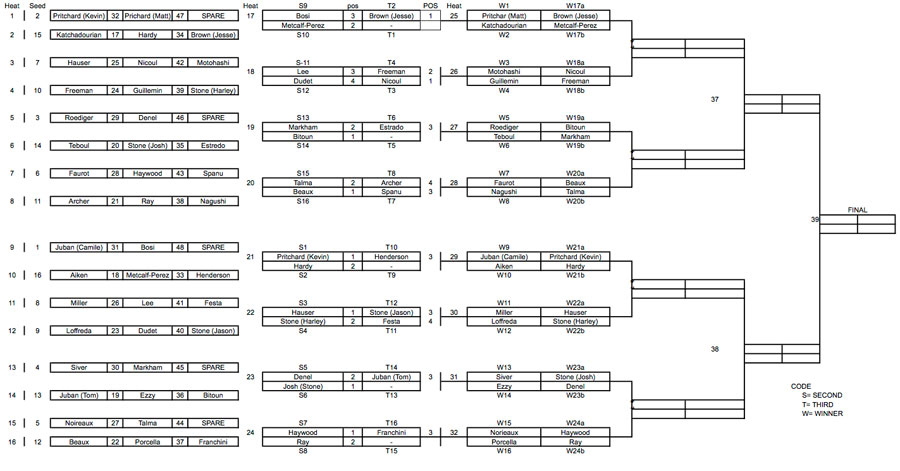 Today saw the opening two rounds of the AWT pros fleet completed meaning that we are now down to the top thirty-two men, who are vying for the remaining spaces in the PWA main draw.

There were several standout sailors over the course of the day, but it was Graham Ezzy (Quatro) who really stole the show. In his opening heat against Tom Juban and Alex Bitoun, Ezzy accumulated the highest scores of the day with a terrific display of sailing. On his opening wave the American rotated through a textbook goiter to immediately set the tempo. On his very next wave Ezzy opened with an exquisite, vertical top turn before sliding through a super stalled taka. Although it didn’t count Ezzy also landed a perfectly executed pushloop.

Camille Juban (Quatro / MauiSails / MFC) was another standout sailor as he boosted aerials at will combined with aggressive, vertical snaps to safely advance into the third round. Levi Siver (Quatro / Goya Windsurfing) also delivered a good performance as he delivered trademark tweaked aerials with silky smooth turns and he’ll now face Justin Denel (RRD) in the third round. Siver also came agonizingly close to an amazing air taka, but on this occasion he couldn’t quite land it.

Morgan Noireaux (JP / Hot Sails Maui) showed his true potential today with an accomplished display of sailing to defeat Brian Tama (Naish) and book his place in the third round. Noireaux impressed both the crowds and the judges with a combination of powerful turns and a superb one-handed aerial, before sliding through two super smooth takas on his final wave to progress.

Kevin Pritchard (Starboard / MFC) made no mistake in the second round, after narrowly losing out to his brother Matt Pritchard (Tabou / Gaastra) in the opening round, as he defeated Pascal Hardy (Sailworks) and Jeff Henderson (Hot Sails Maui) in heat twenty-one. The 2006 PWA Wave World Champion pulled off trademark aerials right in the critical section as he laid it all on the line to guarantee himself a place in the top thirty-two.

The closest heat of the day involved Sean Aiken (Naish), Bryan Metcalf-Perez (Angulo / NeilPryde) and Jeff Henderson in heat eleven. By the end of the heat Aiken and Metcalf-Perez were almost inseparable, but unfortunately for Metcalf-Perez, Aiken just edged the dual due to his higher individual wave score. The most unlucky sailor of the day was Jose ‘Gollito’ Estredo (Fanatic / North), who having flown in from Venezuela had to miss out on sailing after his kit failed to arrive on time, all but ending his hopes of qualifying for the main draw.

One of the highlights: 10:50 Keith Teboul then Josh Stone! 2 waves counting, 14min heat.

Seems to start about 5min in.

Awesome but american style commentary takes some getting used to 🙂