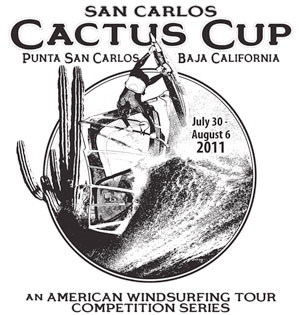 The American Windsurfing Tour will see its next tourstop at the Punta San Carlos, Baja California from the 30th of July till the 6th of August. This spot, which will be the arena for a worldclass event for over a week, is well known for its remote position on the Mexican peninsula and for its unique righthander breaks running clean. Endless turns and aerials are possible! Even jumping on the way out works well. Already a worldcup tourstop took place several years ago and SoloSports Adventure Holidays is running a permanent campsite there. This gives the remote place much more infrastructure.

“ Punta San Carlos is a south facing beach making it the perfect summer spot.  Swells generated in the southern hemisphere are most active from May to October.  Although it’s virtually impossible to second guess Mother Nature, it is predictable that July/August can usher in premiere surf & wind conditions.  It is not uncommon to have consistent winds of 18-25 mph during this time making the contest period the perfect venue for a competition.”
(Words by Clark Merritt)

This time we will see the best US American sailors ripping for the title. One of the top favourites is Kevin Pritchard, who decided last winter to stop competing on the PWA Worldtour and participating instead in all the AWT events. Watch the little video of him talking about the upcoming event, which is the third event out of five on 2011 AWT tour and out of his view probably the spot with the best waves.

More details about the event on the AWT website here