Unfortunately the wind never got strong enough for an official competition. On the one hand it is never good to have no result, but on the other hand, the AWT wants to keep the prize money for an event at Cape Verde in February 2015. “The idea has been put out to run an on forecast event in Cape Verde with a month-long holding period for February 2015. Up for grabs will be the unused prize money from the Santa Cruz Goya Windsurfing Festival.” Sam Bittner, AWT Tour Manager

Pescadero was the hot spot on day 2

Beautiful beach scenery with Josh and Kai at Pescadero

All vans and pick ups are lined up

Not much work for the judges

Beach view from the Pacific ocean

Josh Stone with style during the SUP comp

Sam has a surf session

The top 4 in the SUP competition

Organizer Sam Bittner and sponsor Francisco Goya with the trophies

There were winners at Waddell Beach

Girls want to get wet movienight

The 2014 Goya Windsurfing Festival wrapped up it’s fourth day without seeing enough wind to run the contest, but a good time was still had by all. The surf was pumping all weekend allowing everyone to get on the water either surfing or standup paddle boarding. The event’s final party was also one for the ages featuring great Mexican food, killer live music and the premiere of an awesome new windsurfing movie starring many of the athletes from the women’s division: Girls Want to Get Wet.

“With a third day in a row of no wind but beautiful clean waves at the AWT Goya Windsurfing Festival in Santa Cruz the call was made for a second standup paddle contest. Brackets were drawn up with 30 competitors entering for fun in the glassy surf. The final came down to a highly contested battle between Fiona Wylde, Josh Stone, Tony Litke and Bernd Roediger. Wylde caught some of the biggest set waves of the heat but her awesome wave choice didn’t pay off as she was punished by some nasty sections. Josh Stone had some solid slashy rides to nail down the third position. I looked like the first half of the heat was led by Tony Litke, who was carving some big roundhouse turns and landing some big hits. But at about the halfway point of the heat Roediger decided he wouldn’t let Litke have any more dreams of winning. Roediger’s final few waves were absolutely incredible as he brought the victory home. Congrats to all the competitors on a great show.” Sam Bittner, AWT Tour Manager 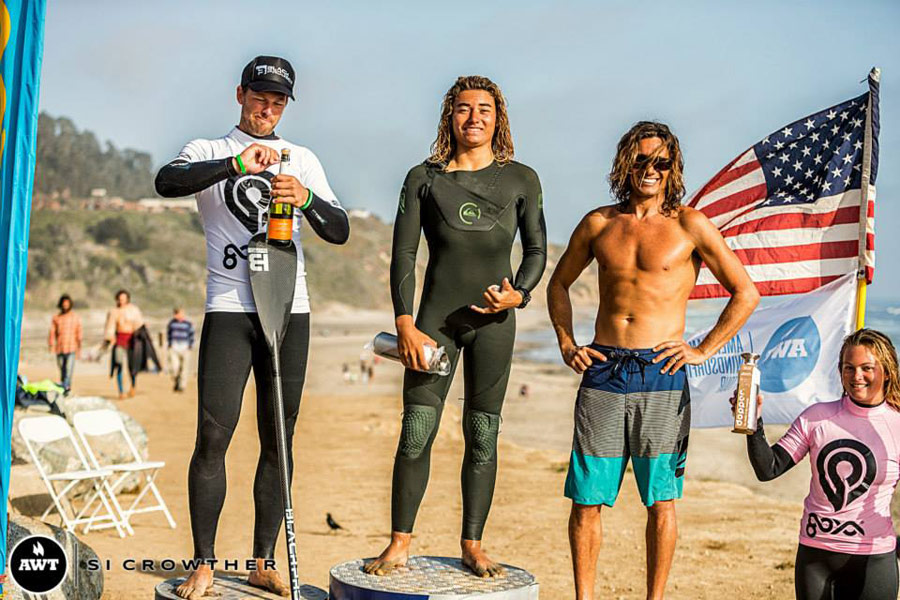 The top 4 in the SUP competition

The AWT will see 5 more events with the next tour stop at Pistol River, Oregon. The event will start on June 12.