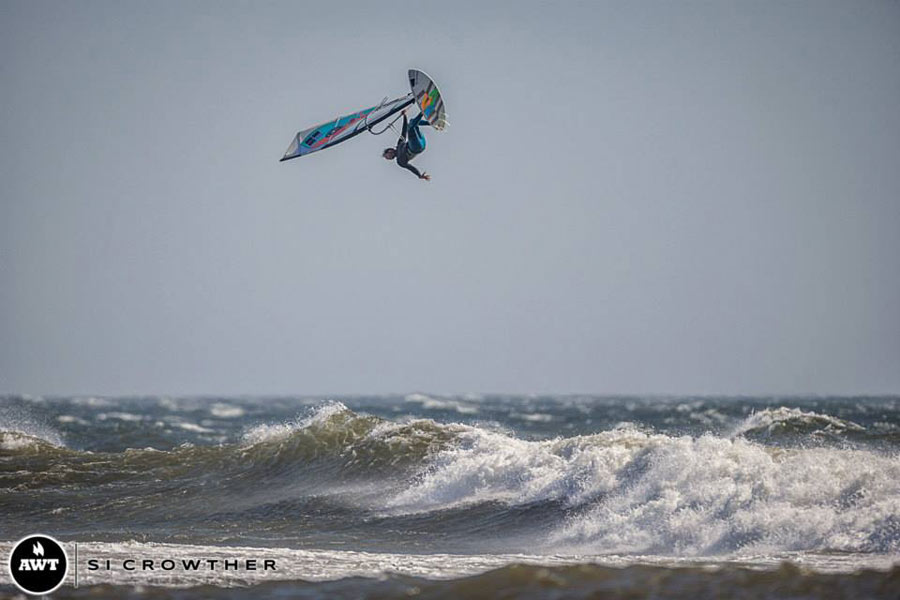 Levi Siver writes on his Facebook account: “Fun event with the boys. Onshore jumping down the line wave sailing we had it all this event. Thanks to Sam, Chris and all the AWT family. Also Keith, Fran,Lalo, JD and my sponsors for their support. Final was challenging conditions with small waves somehow I came out with a win but I couldn’t imagine it was by much.” 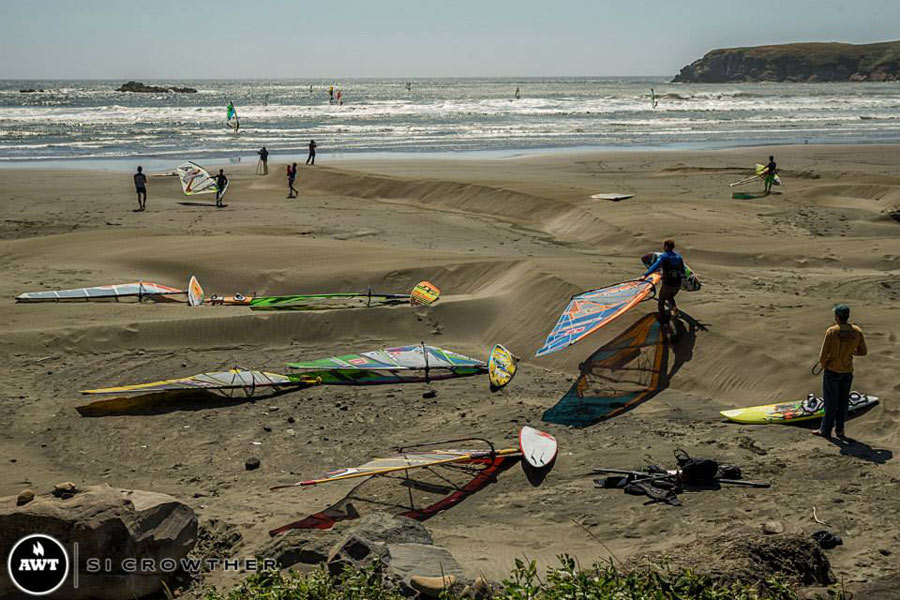 With only eight riders remaining the call was made to run at Pistol River with the best two waves and jumps counting through 20-minute heats. The decision to run such long heats was made to push riders to go for the hardest moves as there was no lack of quality conditions… and it paid off.

Roediger vs. Noireaux vs. Pritchard vs. Browne – 1st Semi Final

The first semi-final featured young guns Bernd Roediger and Morgan Noireaux along side world champions Kevin Pritchard and Marcilio Browne. All riders landed extremely difficult variations on Back Loops along with other insane jumps and wave aerial moves. However, experience reigned supreme with Browne and Pritchard finishing first and second, knocking the youngsters out of the competition leaving Roediger in third and Noireaux in fourth. The jumping highlights of the heat were Browne’s Double Forwards and Pritchard’s one-footed-one-handed Back Loop.

The second semi-final saw two riders from Guadeloupe, Camille Juban and Antoine Martin, along side veteran competitors Nathan Mershon and Levi Siver. All these riders score sheets were filled with high numbers from various Back Loops, Push Loops and tweaked-out aerials over critical wave sections. Siver looked to be in strong contest form advancing in first position followed closely by Juban in the scores. Leaving the contest was Mershon (3rd) and Martin (4th) despite each putting together a solid heat.

The waves didn’t seem to find Pritchard quite as easily in this heat forcing him into fourth position despite landing extremely difficult Back Loop variations and solid powerful wave rides. Browne may be the king of the Double Forwards in this group, but Juban landed one along with one of the strongest wave rides. Still, Juban was pushed back into the third place on the podium. Browne landed three Doubles in this heat alone with each one scoring better than the next. Against most this would guarantee victory but not here as Siver’s strong wave rides with huge tweaked airs and massive Back Loops secured him the title. 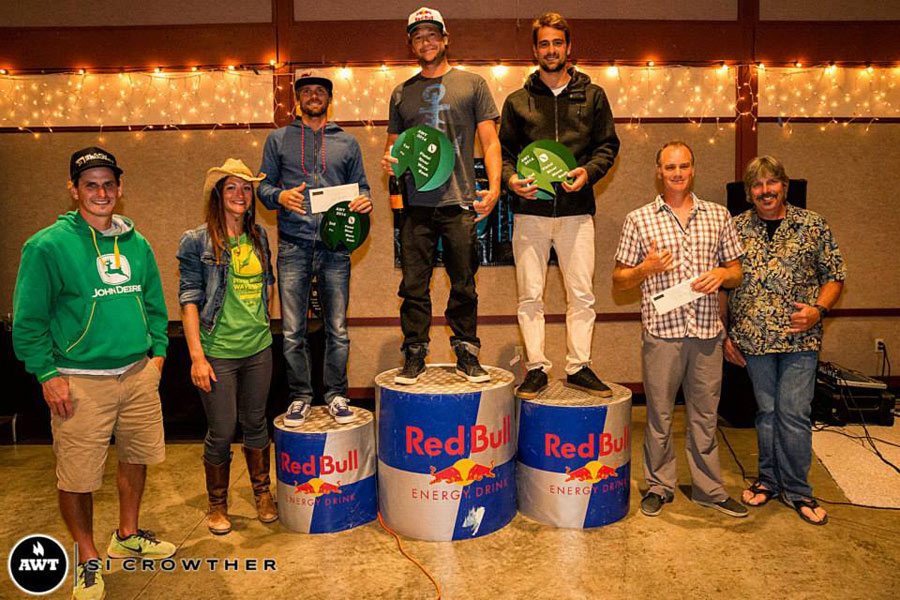 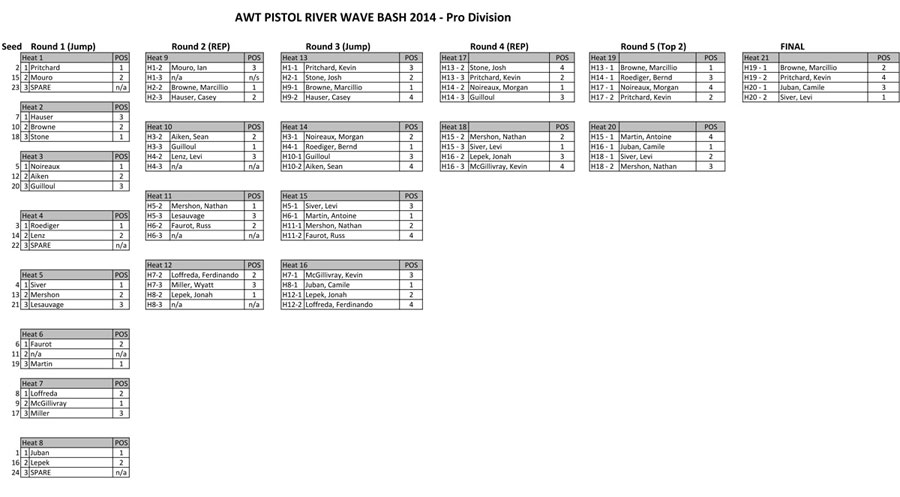 Women’s Division
The level in this division keeps increasing year after year. Last year’s battle between Ingrid Larouche and Fiona Wylde has now expanded with Sarah Hauser upping her game and Carolina Butrich and Sam Bittner not far behind. This year it was also great to see Roz Thomson and Rhonda Gill join in on the action and fun, as this division is truly a driving force behind the spirit of the AWT.

The final saw Larouche taking the title despite just coming off a nasty injury. Her wave riding didn’t show her lack of recent training and landing a clean Forward Loop helped secure victory. Not far behind was Wylde in second. Her time spent training in Maui has paid off with her wave selection being spot-on and her aggressive style leading her to some of the longest and highest scoring wave rides in the heat. Hauser took third spot on the podium with her incredible flowing style and definitely the single sickest wave smack of the entire competition. This girl is definitely one to watch at upcoming AWT events. Finishing just off the podium but still sailing strong was Butrich who is from Peru and was impressing all with her smooth style in the crazy high wind conditions.

Youth Division
This year’s youth division was the strongest we’ve ever seen at a mainland USA contest. It was a tough three-heat battle for the title that came down to three sailors battling for the top of the podium. Maui’s Harley Stone and Casey Rehrer sailed extremely well in the tough windy conditions but neither showed quite enough to take down visiting French sailor Loick Lesauvage. Lesauvage’s smooth flowing style and massive Back Loops really impressed the judges…and this kid is only 14-years-old! 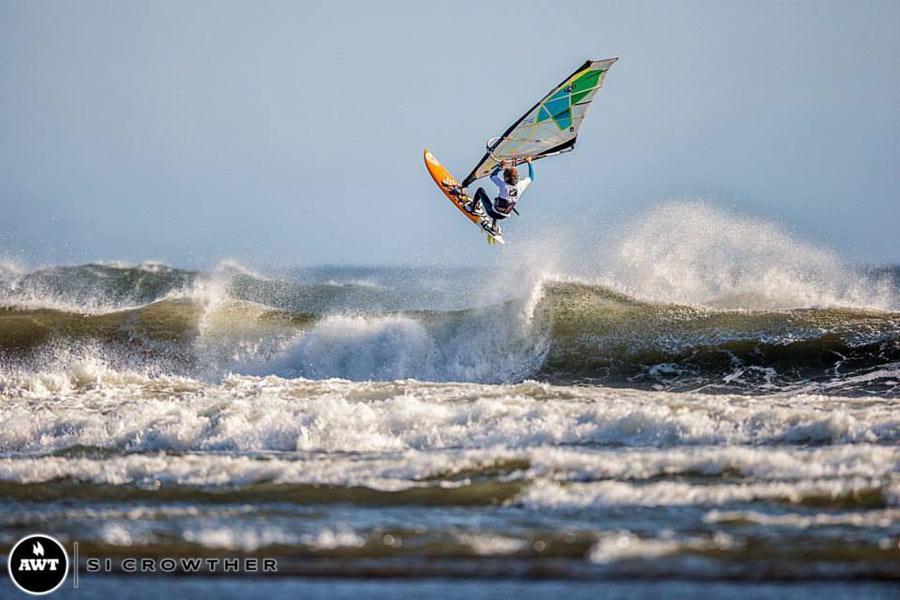 Amateur Division
With only five heats in the books after day one there was a lot to get through on day two with a 27-rider strong amateur fleet. The stronger wind made conditions a lot better for this crew and everyone was catching tons of waves. The final came down to a heat featuring the top two overall amateur riders from last year, Casey Rerher and Ruben Lemmens, along side veteran west coast shredder Attila Tivadar and Canada’s Dan Thomson. With it gusting over 30-knots all four put in their best rides and biggest Loops. In the end it was young gun Rehrer topping the podium whose slashy style and wide array of jumps led him to victory. The other two spots on the podium were grabbed by Thomson (2nd) and Tivadar (3rd) who were close to Rerher on their wave scores but just edged out on the jumps. Lemmens sailed well to fourth but I’m sure he’ll be looking for revenge against these other guys in the next competition.

Masters Division
With two pro division sailors, Sean Aiken and Ferdinando Loffreda, also competing in the masters it tells you just how good this group really is. But… it was Dan Thomson having the last laugh over these pros and taking the title of AWT Pistol River Masters champion.