Kevin Pritchard won the AWT Hatteras Wave Jam in front of Boujmaa Guilloul and Morgan Noireaux. The Wind-NC Hatteras Wave Jam was completed with a few days of solid conditions, alternating between head high side off shore waves and some windy side onshore drainers.

Kevin Pritchard: “This year in Hatteras the conditions were pretty much as good as it gets! We had some side shore wind and some pretty large waves coming in the coast. I had some Sylt flashbacks when I went out. The lighthouse here in Hatteras has a long sandy beach, some small jetties, and a sandbar on the outside with some pretty soft rollers. We had rain and wind and all the conditions that made it super challenging. For the finals, Bouj and Morgan were pretty much owning the waves. I had a little incident with a kiter which made it a bit challenging but I remember getting a wave and gybing out and and the wave just came out of nowhere and set up for a huge one footed back loop. It was just perfect. I couldn’t believe it when I saw it, the ramp, right in the heat, it was just perfect. The rest was just slashing a couple of waves and putting all those years of going to Sylt into practice. It was fun riding with Bouj and Morgan as they are always pushing the sport and making it look good.”

In the Amateurs, Casey Treichler took the win while also getting amongst the Pros and finishing 4th. Using a caddy to get out past the pounding shore break, tour director Samantha Bittner took the win riding some solid waves ahead of Sara Flowe. Jake Schettewi won the Youth, narrowly beating his brother Max with a clutch last second wave. The Italian Stallion Ferdinando Loffreda won the Masters, and Scott Shoemaker won the Grand Masters.

In the overall ranking it’s quite close. Boujmaa Guilloul is leading by 500 points only. Kevin Pritchard follows in second place. 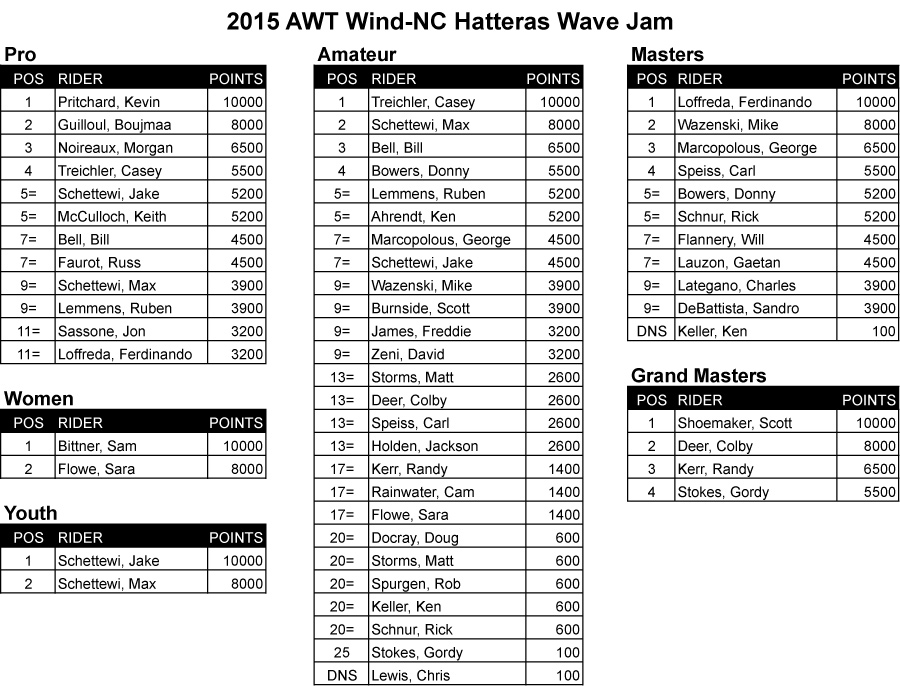