Sarah Hébert decided to abandon her challenge to cross the Atlantic Ocean on a windsurfing board. She started her journey on the 22nd of February in Dakar, Senegal and the plan was to be 4000km and 25 days later on the island of Guadeloupe.
But Sarah was confronted with many difficulties, like 3 to 5 meter swell during night and day, stronger winds than expected and a difficult direction of wind, which would have doubled her way. During the last days Sarah was forced to make a break already, because she felt extremely dizzy, tired and weak. In the end the power did not came back and she and her team have decided to abandon the project and give health the priority. But, hats off to Sarah Hebert, who took a lot of risk. 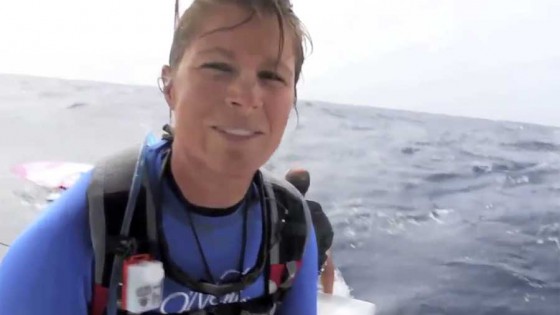 […] to cross the Atlantic Ocean on a windsurfing board. If you missed the article you can read it here. She and her team have now arrived at Guadeloupe. Sarah decided to jump again on the windsurfing […]

let the real men do this

Bravo Sarah! I am sorry to hear you had to stop, but I know you! You will try again because you are Different.
Hope to see you soon and we can plan some trip together!
Respect!!!

0
Reply
This website is using Google Analytics. Please click here if you want to opt-out. Click here to opt-out.
8
0
Would love your thoughts, please comment.x
()
x
| Reply
We use cookies to ensure that we give you the best experience on our website. If you continue to use this site we will assume that you are happy with it.OkNoRead more