Antxon Otaegui (27) was already on the top winning a PWA Freestyle event in 2008 at Westerland, Sylt. And now, just 2 and a half years later he decided to quit his succesfull windsurfing career. There were several reasons, which forced the Spaniard from the Canary island of Lanzarote to finish his career. Antxon (E-169), who started his windsurfing careet through a Young Guns camp and getting a wild card for an official PWA freestyle event on Fuerteventura, could proof that you don´t have to be from Maui, Brazil, Venezuela or Bonaire to make it on top of professional Freestyle windsurfing. The professional windsurfing scene is losing a big  character on the PWA tour, who had an unique style on and off the water. Read more in the following interview, why Antxon decided to quit and follow new tracks! 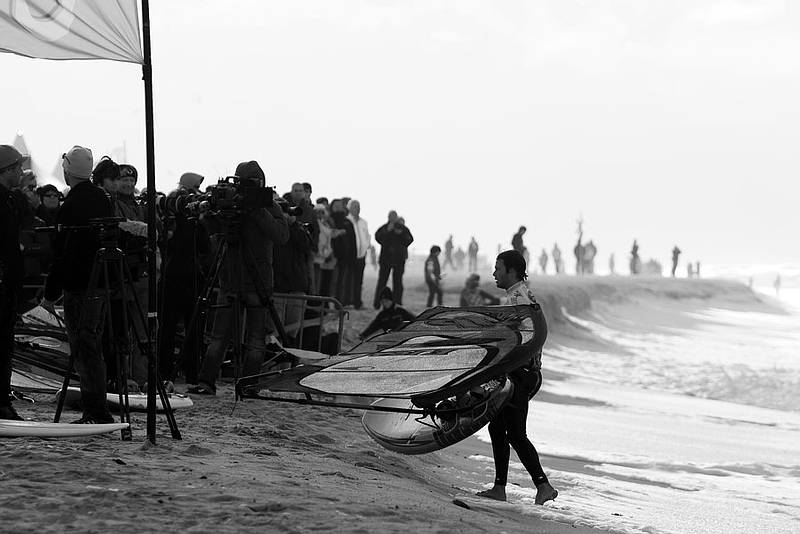 C7: We just saw that  you are off the NP international Teampage!  What happened?
Antxon: Yes, I didn´t  make any official announcement on that,  but I decided to stop my career as a pro windsurfer. I had many injuries on my right foot and it will never be 100% fit again. This together with the difficult economic situation made me take this decision. 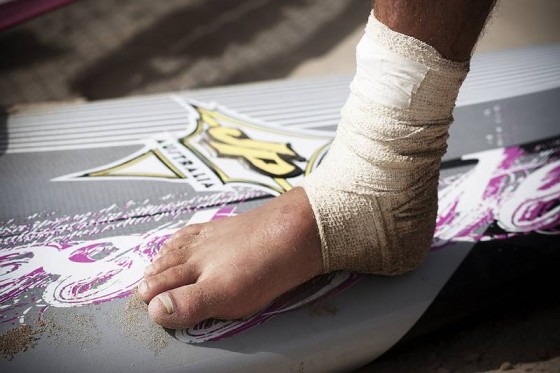 It was the right leg, which made problems in 2010 again at the Fuerteventura event (Pic: PWA/Carter).

C7: So you definitely decided to stop your career from now on?
Antxon: Yes, I won´t compete anymore. I will keep on sailing in front of my house just for fun.

C7: How much did the injuries influence the decision and how was a less good contract responsible for the fact that you stopped competing?
Antxon: Well, the injuries had a lot to do with the decision I took. If you have pain when you sail it is very hard to improve. I was going for the moves with fear and it is easier to get more injuries like that. About the contracts, well, JP and Neil Pryde wanted to take my salary off and just pay me to go for the events and give me gear. I have been on tour several years and I know more or less the costs that I had each season and what they offered me was not even close to what I needed just to cover the costs.

C7: How do you feel about this decision. You were quite into the scene and still very competitive! You had two 9th in the freestyle events and an excellent 17th in the double elimination of Pozo in 2010? Was it not enough?
Antxon: To be on the 9th position in the Freestyle discipline is not good enough (money wise) to make a living out of the sport. Anyway, it is hard to make a proper living even if you are on the top 5. I was happy about my 17th place in Pozo, but this doesn´t help at all to get a better contract. 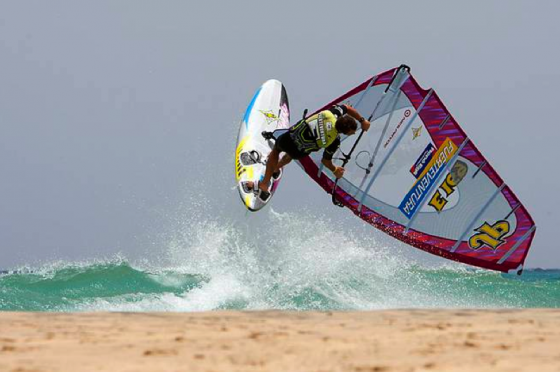 Antxon at the warmup for teh PWA freestyle event at Sotavento in 2010 (Pic: PWA/Carter).

C7: But you are still on the water at your homespots at Lanzarote, Canary Islands?
Antxon: Yes, definitely! I have been sailing these days at Jameos, riding some waves and it was long time ago, that I did enjoy a session on the water so much. I am doing more wavesailing than freestyle, it´s less hurting at my foot. I sail every day, if it is windy with decent conditions,  at least wind with 5,3 and 89 liters. Depends on the month but more or less I would say 10 to 15 days a month (this time of the year), more in summer.

C7: Or does your stop in competition mean, that you are less motivated to windsurf?
Antxon: Well, I was less motivated when I was on tour, I was not enjoying windsurfing as much as I used to do and this made me think about the whole situation.  But since I stopped competing I am enjoying it like before.  If I don´t like a move I just don´t do it. I don´t have to train anymore. 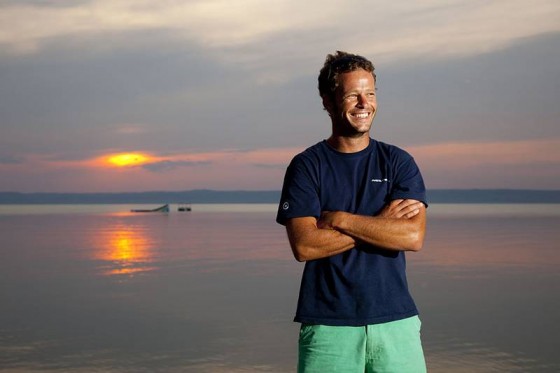 Antxon already thought about his plans in the future in 2010 (Pic: PWA/Carter).

C7: What your plans now? The plan B, or did you have this one in your pocket for a while already?
Antxon: Well, I am about to open a business in Lanzarote with a good friend of mine. I am gonna invest some money, but I am sure it will work out.

C7: Are you disappointed that you´ve stopped your career at this point?
Antxon: Well, not really. It was a period of my life that was really nice. I enjoyed 100%, many many many good experiences. I made some really good friends, but I felt already since one year that I needed a radical change in my life.

C7: If we look back, you had great results, especially on the PWA events on the Canaries, ranked on podiums and you could win several EFPT events! What was your career highlight?
Antxon: I would say my victory in Sylt 2008, the EFPT title on 2008, the 3rd place at the PWA freestyle event in Lanzarote 2009 and the 3rd place in the PWA Freestyle on Fuerteventura 2006. 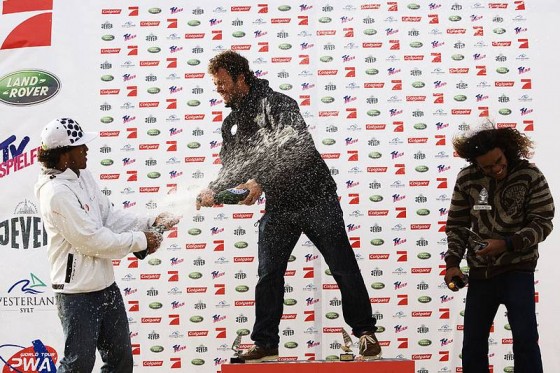 The moments of the biggest success, celebrating the PWA victory on Sylt (Pic: PWA/Carter).

C7: Your favourite car is a Porsche. Would freestyle and wave windsurfing never allow you to get one?
Antxon: hahahaha……, well it would be really hard. 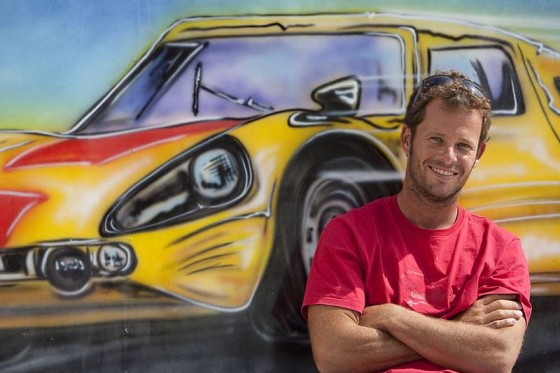 C7: Your were competing on the freestyle circuit for almost a decade. Did the sport change a lot out of your view or got the moves too extreme?
Antxon: Yes, it improved a lot. I believe Freestyle windsurfing is much more spectacular and technical  these days. To learn a move these days you need to learn first, how to get in the position to go for it.  Just for this you need to have an unbelieveable control over your gear! 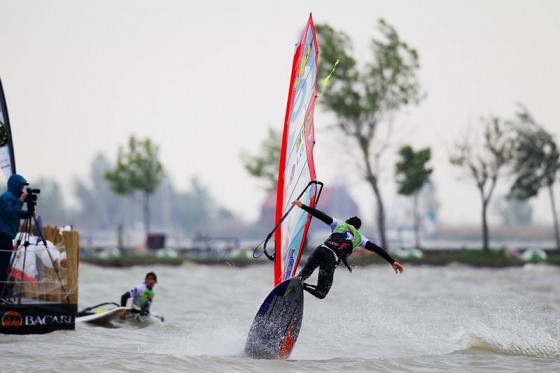 This was the last PWA freestyle event in Austria for Antxon in 2010. He finished 9th. (Pic: PWA/Carter).

C7: Will we see you at your homespot in the PWA event this year, perhaps competing?
Antxon: I will be around for sure, but I think I won´t compete. I don´t have the level of the top guys anymore. 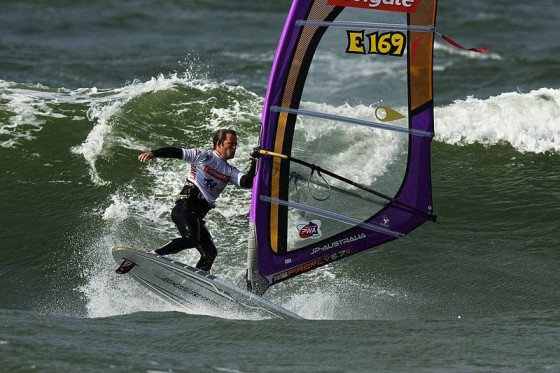 C7: Tell us, what´s the “El Garbazana”?
Antxon: Well, that is a move I made some time ago. Just two times and at the third attempt I had a pretty hard crash and I stopped doing it. It was a Pushloop downwind  landing as a shaka.

C7: We wish you good luck – we never forget about the “7 sons of Freestyle” connection (editors note: “7 Sons of Freestyle” was the first “freestyle only” windsurfing DVD we´ve produced in 2004 with Antxon Otaegui, Ricardo Campello, Gollito Estredo, Remko de Weerd, Normen Günzlein, Andre Paskowski and Cheo Diaz), but just the worldchampions Ricardo and Gollito plus Andre Paskowski, who got stopped through a cancer (he put his focus on DVD productions, but is still focused) are still in business, and really hope that you find the right direction to go ahead!!

See you on the beach of Lanzarote and thanks for all your effort in the past years!

Antxon: Maaaaan….., you are gonna make me cry. I won´t forget the “7sons of Freestyle” video either. Thanks for all the help these years.

Was nice to know you ! So, see you maybe in Lanzarote !!
All the best for you and your foot 😉

one of the most sympathic pwa- riders,
remembering the “life” DVD,
pity…

thanks guys for all the comments, is always nice to hear those kind of things. I am sure I will see many of you somewhere in the water.
All the best for all of you

Let’s see.. Yeaah there’s a bunch of windsurfers out there! This is great! They are so passionate about this sport that they won’t give a hack even if we give them just some equipments and flight tickets while they invest all their lifes on this. Hell yeah! They are that cheap! And the best thing is we could never find more efficient people in another industry that can do research and development and at the same time marketing our products! Ohh wait..! What if they find more efficient ways to make their livings…? Don’t worry there’s always another sheep.. Anxton… Read more »